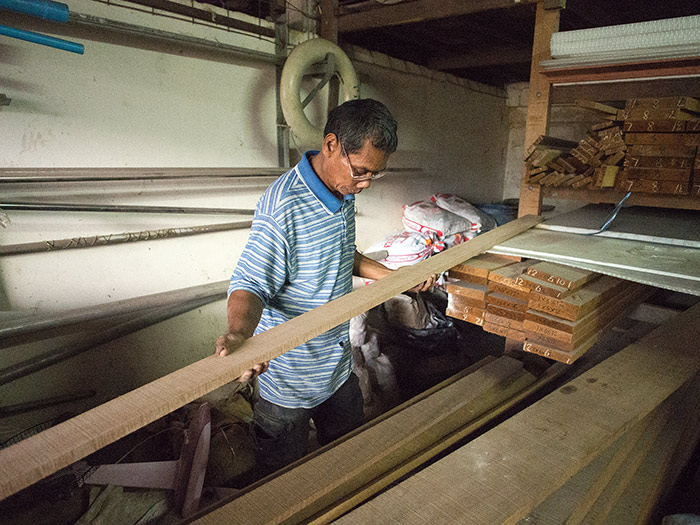 Whilst the local people celebrated Songkran we took a short break in Ko Lanta where we answered some of your questions. Despite the holiday, work continues both inside and outside Esper.

Here’s the video clip of your questions and answers, as well as some further coverage in the yard. We also get a glimpse of ‘Thea’, the 90ft motor boat being rebuilt at PSS.

The painters have laid the top filler over the deck. This is a micro-balloon/epoxy mix that’s lightweight yet hard. It has the appearance of icing sugar and, once dried, is sanded back, by hand, until a smooth finish is attained. This is a long process and it will be a while yet before we are ready to paint the deck.

Sanding the micro-baloon epoxy on the deck

We’ve kept a few parts of solid ash around the boat, mainly in the saloon, since they’re integral to the design. The issue we had was matching the colour of the ash with the new ‘white vine’ veneer. Ash, when either varnished or aged, or both, goes a yellow/orange colour, so we invented our own limewashing technique to help make the ash fit better with the rest of the interior.

A layer of paint was applied and, just before it dried, was rubbed into the wood. Damp cloths were then rubbed over the wood some more, which helped remove the majority of the paint. All that’s left is white emulsion in flecks of the grain which, when viewed as a whole, gives a whiter appearance.

The solid ash, centre, has one coat of polyurethene applied and is a better match with the rest of the veneer

Some of the ash trim took the paint better than other bits of trim, depending upon which way the grain ran.

After much deliberation as to what to put on the floor (we considered rubber, bamboo, plastic laminate, tiles… you name it, we researched it) we decided to go for a teak veneer. The original plan was to limewash it like the ash, but now that Pong has started to lay it down, we’re thinking of leaving it as is, save for a few coats of polyurethane.

Pong, our head carpenter, inspects and selects some teak planks for the floorboards 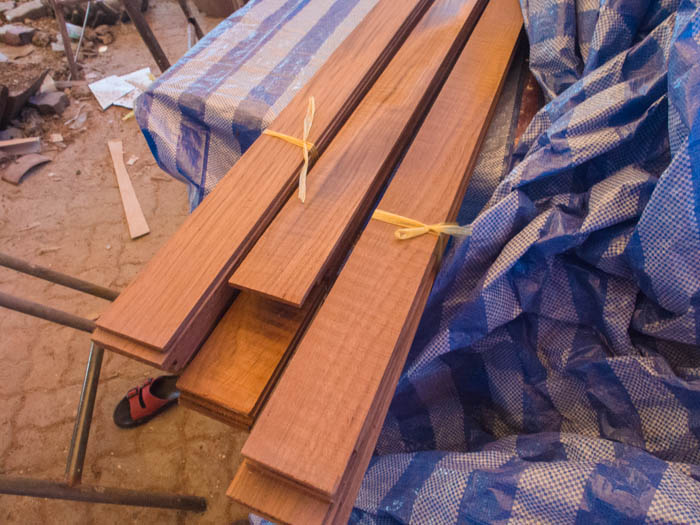 A little teaser of our new floor

With Mey’s duties inside the boat done for the time being, we’ve relocated her to our outside office and got her started on the aluminium deck fittings. It’s amazing what a bit of wet-and-dry sandpaper, Brasso and elbow grease can do for your rope’s hardware. She’s really brought them up a treat.

So far all the cabinet work has been veneered, but the edges were not finished. This week Ton showed us a simple trick with finishing off the trim around the cupboard doors. By the time he’d finished with the veneer the doors looked like solid pieces of wood.

Sticking, slicing and sanding the veneer around the cupboard doors

We’ve received our Wilson Art plastic laminate (like Formica, but better) for the rear heads, and it’s rather splendid too! However Pong will continue to lay the teak floor so that may have to be put on hold. In fact most of the work over the next week will simply be the workers picking up from where they left off before Songkran. There’s still a lot to do on the deck, and we haven’t even started on the electrics. Our electrician is going to be tied up on another boat so that’s on hold for the moment. We have just received our replacement Windpilot, however! The problem is it has to go into the bonded warehouse and checked by customs before we can do anything with it.

With thanks to Terry and Nick for taking delivery of our furling bearings this week. Much appreciated.