7am and we’re woken up by a very loud Blackadder-like “Wake up ladies there’s work to be done”, followed by stomping on the roof. Immediately my mind was cast back to the early morning starts aboard Ramprasad and for a split second I thought that perhaps I’d made a mistake joining Voyager. Michelle and Tim weren’t too impressed with the wake up call either but it was soon forgotten after a decent breakfast and fresh coffee from the espresso machine. 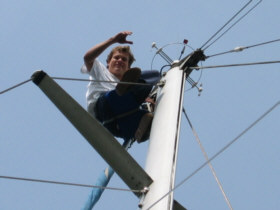 Tim up the mast

After breakfast we set to work on Voyager, which clearly hadn’t been sailing for a while, despite that fact it had been lived in for the last year or so. Evidence of this included spiders webs, worn ropes too old to be used for sailing and loose rigging. Tim, Michelle and I took it in turns to be hoisted 20metres up the main mast for a number of checks and replacing of the halyards (ropes that hold up the sails). I was up there for at least an hour trying to feed a new rope down the mast, which was extremely fiddly, very frustrating and ultimately unsuccessful. The cramp in my arse told me it was time to come down and try again tomorrow.

Other chores included preparing and painting, securing and screwing and other general DIY jobs that kept us busy for the entire day. In the evenings we chilled by watching videos! Yes, we have a TV and video and Tim had brought some with him.

On Thursday after another hard day rounded off with beers in the evening we were joined by Jason, who had flown from his dad’s in Gibraltar. The lucky git had managed to avoid three days hard graft but he quickly made up for his absence by becoming chief engineer aboard Voyager.

We've scrubbed it once already!

Friday was supposed to be sailing day. The idea was to have completed all work aboard and then get the boat out on the Ijsselmeer to trim the mast. Alas the problem with the halyards (feeding three ropes down the inside of the mast) had held us up, and there was so much crap inside the boat that wasn’t sea worthy that we had to postpone our first sail. Very frustrating but probably just as well as we were all exhausted from the long days of hard, physical labour. The last couple of days had seen us doing over 12 hours each day. And we’re paying for this!

Link in profile. If you think sailing round the wo

Chilling in a remote anchorage with a couple of ma