You may have noticed–if you’ve been watching our YouTube channel–that we’ve been threading our way through some reef-strewn narrow channels in the islands off western Sumatra. This was made more difficult by our nautical charts being off by anything between 200m and half a mile.
Using satellite images can give valuable aid in these conditions by accurately identifying reefs and shallow patches; in some cases they have become our primary means of navigation.

Here in Indonesia the charts can be up to half a mile off, but it’s not the first time we’ve come across charts being of limited value. The Red Sea was impossible to navigate by chart through the tight marsas of its western coast, Maldives charts are poor, and two years ago in the Anambas we used satellite images everywhere. It’s not unusual to see your track going across land in these rock and reef-strewn areas.

One resource many yachties use, in conjunction with charts, is satellite images. These images benefit from being precise and detailed when zoomed right in because they show the obstructions a chart plotter or paper chart is unable to provide. 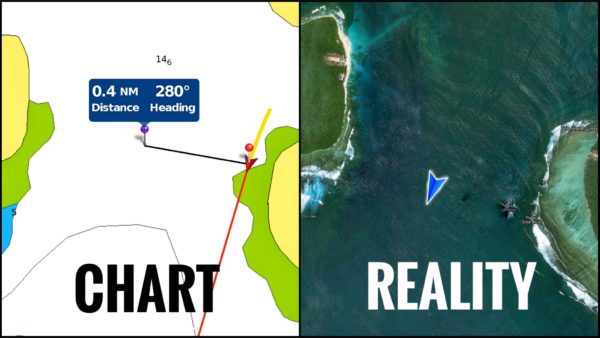 You may already be familiar with KAP files, which allow you to overlay a sat image on a chart using something like GE2KAP to create the file and OpenCPN to display it. But not all of us run systems to allow us to do this.

We run a proprietary chart plotter (B&G) with Navionics charts and do not use Windows, Linux or IOS, and yet we use satellite images to navigate, sometimes for hours at a time.

Our setup is simple: chart plotter at the binnacle and phone to one side in a clamp. We find this arrangement is non-distracting and easy to switch between.

Before we go any further we should remind you that Mark 1 Eyeball is our most used tool!

We don’t rely solely on one system or the other. It’s about combining as much information we can gather as possible.

At this point it’s worth talking about Ovital, which we’ll use as a comparison to the app we use,  All-In-One Offline Maps (AIO). The one advantage Ovital has over AIO is that it is available for both Android and Apple. AIO is Android only, but as you’ll see from the video its almost worth buying a cheap Android phone dedicated to this app.

But if you don’t wish to do this, and you only run on Apple, then Ovital will serve your needs just fine.

So what are these apps?

They are apps that allow you to download maps and satellite images to your phone or tablet. Using the built in GPS in your device, you can navigate around the maps. It is similar to GoogleMaps but with a few navigation-specific features like adding, importing and exporting waypoints.

We should be clear here that these apps do not allow you to download charts with depth data, which is why they are used in conjunction to, not as an alternative to, nautical charts. That said, there are times when nautical charts do not provide sufficient data (like specific reefs, rocks, bommies) or are showing incorrect data, like the position of land.

Help us put out more quality work,
become an FTB MATE!
It costs less than a cuppa tea…☕

How does All-in-One Offline Maps work?

The info box in the top left is really useful as it always displays your position, as well as the scale of the chart.

There are a few other details but perhaps the most useful is the bearing and distance. These are based on your position and the centre of the map. By dragging the map to an object you can instantly see how far away it is from you and its bearing.

To quickly return to your current location press the target button.

Of course the most important feature is the ability to zoom into detailed satellite images. To the uninitiated the name All-In-One Offline Maps is misleading because you have to be online to download and cache your maps. This is the same for Ovital and creating KAP files, but once you’ve cached them, you can use the app whilst offline.

In order to cache an area you need to scroll over it and zoom, zoom, zoom. In some respects this is less convenient than Ovital or GE2KAP as these two processes are automated.

Whilst we haven’t made a KAP file in years, compared to AIO, Ovital is a lot more cumbersome. Drawing a polygon around an area takes longer and the download process is tiresome.

Make sure you download to the desired level, you’ll be surprised how close you can get (right into bommies and individual coastal structures). In some instances we’ve been able to see cardinal marker buoys on the satellite image!

Which side of the island are we?!?

What’s great about AIO is the ability to change the saturation and brightness of the images. This is where it comes into its own, especially when used in conjunction with Bing satellite images.

One of the issues we have found with Google Satellite is picking out the blue green hues  in bright sunlight. Bing has a little more clarity and definition, especially around reefed areas.

But you may prefer Google to Bing, so try changing the layer opacity between the two; this will allow you to quickly decide which is better.

This is pretty straightforward.

AIO comes with a number of additional plugins that may be purchased through the app. At just a few quid they’re pretty cheap and it helps support the app developers.

The most useful one for us as adding the ability to import and export GPX waypoints. GPX is widely supported by many chart plotters.

We downloaded Andy Scott’s Indonesian Cruising Guide waypoints, which gives you the positions identified in his book straight onto the map.

We have also exported all our waypoints from the Mentawai islands, and are happy to give them to other cruisers.

Having used Ovital extensively in the Anambas we were pleased to switch to AIO. Here are some of our reasons:

One feature Ovital does have, however, is the ability to record your track. AIO doesn’t do this. In this instance, we still use Navionics on our chartplotter and phones.

If you found this useful, let us know, and leave your comment below.

If none of the above floats your boat, please consider supporting us by clicking an icon below and sharing this post. Cheers!

Guess how long we're going away for. Answer: it's

Having to make do with this view from our anchorag

How to cook fish that tastes like it's been barbec

How to use satellite images to navigate | followtheboat
7ads6x98y