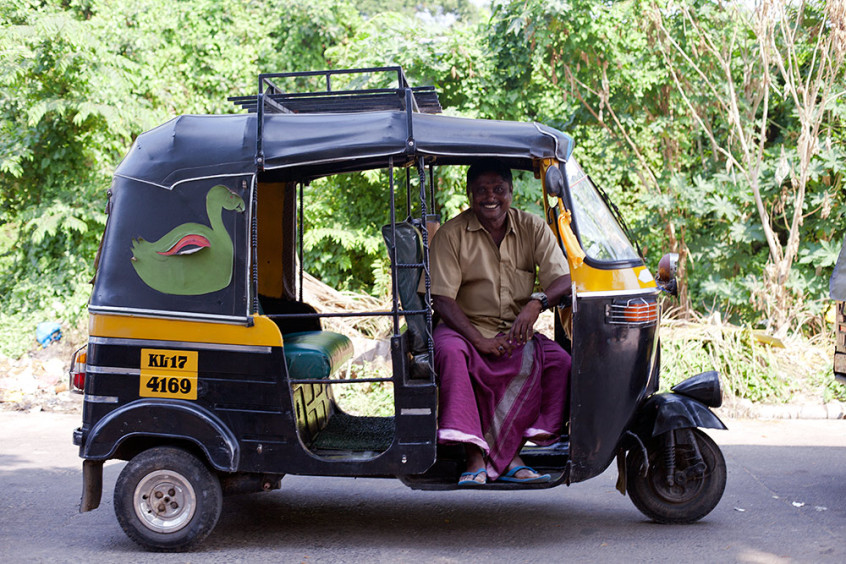 After a long voyage on s/y Suriyani, our friends Gladwin Oa and Bryan Thurlow have recently arrived in Langkawi from Cochin. Anyone who has kept up with our travels knows we spent nearly three years in India, a place where we made friends for life. Nazar and his family became an important part of our days in Cochin, and we were thrilled when Gladwin presented us with a present of jewellery and cloth from them. This is an account of our friendship.

With a sideways, rolling nod, he proffered a flimsy business card. Maybe, I thought, taking it from him. His anxious expression relaxed, and a brief smile smoothed his shiny face.

“No other Nazar.” He frowned at me. “Other Nazar very bad man. I cam tomorrow. Maybe every day to marina? OK, I go now? Maybe clean boat?”

Jamie and I had completed a 4,500 mile sail from Turkey to India, and after six months of adventures were looking forward to some uninterrupted peace. Cochin—with its mango trees, Frangipani blossoms and stork-billed kingfishers—looked inviting.

The marina consists of a few floating pontoons thrown out onto Vembanad Lake from the landscaped gardens of an elegant government hotel. When we first arrived, there was no chandlery, no technical services office or grocery store, no security guard, shower block or bar (at the time of writing, there is now a sleeping security guard and a shower block). But you can plug into the electricity supply, and the fresh water is clean.

From the day we arrived, Nazar 72 turned up each morning in a wooden boat, its noisy outboard engine heralding his arrival. For shade, he had rigged up a canopy of blue plastic sheeting and raggedy green netting over a makeshift frame. Nazar 72 was painted along the side. He knocked on each boat in the marina, offering his services.

One day, a wiry fellow arrived in another boat. It was clear from Nazar 72’s disgruntled expression that this was the shady Other Nazar. They raced from yacht to yacht in 45 degrees of pre-monsoon heat, eyeing each other suspiciously as they touted for business. Other Nazar rolled up his floor length lungi to half mast and tucked it into his waist, exposing sinewy brown legs beneath bony knees. Later, as he worked on various decks around the pontoons, Nazar 72 took his shirt off, revealing a wide, muscular torso. Nazer 72 in his auto-rickshaw

He came closer and whispered, “He no good man. Maybe diesel no good. Maybe Mick is it, ma’am.”

Jamie, using his innate grasp of Nazarese, interpreted for me. “He means ‘mixed’. There are rumours that Other Nazar is selling dirty fuel.”

“I am first Nazar. Nazar no even he name. In my country, too many people greedy. Always money, money, money. I no like,” said Nazar 72. He emphasized his dislike with a theatrical frown, and for once there were no ‘maybes’.

Over the next few weeks, the Nazars did odd jobs for all the boats in the marina. We shared our chores between them, but after catching Other Nazar in a lie, we dropped him and stuck with Nazar 72. He found us technical help from specialists in his country (which we later discovered meant the small Muslim area where he lives in Fort Cochin). He drove us around in his noisy auto-rickshaw, flinging enthusiastic, but sometimes unintelligible, half sentences of conversation over his shoulder. Occasionally he’d top up the greedy engine with petrol from an old lemonade bottle. He learnt to call Jamie by name, but steadfastly addressed me as ma’am.

We learned that Nazar had started work aged twelve, earning two rupees a day lifting sacks. At eighteen, he was allowed to balance loads on his head and was soon carrying 100 kilos. Most of his wages went to ‘Mummy’, but he saved 50 paisa a day so that he could see a film on Sundays. His son, Nisam, who speaks better English than his uneducated father, translated through the ‘maybes’ for us when Jamie’s linguistic skills failed.

When Nazar met our coddled cat, he fell in love. He adores animals, but the few ragamuffin moggies you see in India are tiny. To him Millie was an exotic sleek-coated giant. When he discovered she knew the word ‘fish’ he’d arrive at the boat calling “Fish! Fish! Fish!”. But Millie turned her nose up when she realised he seldom had any food, and our carefully nurtured training programme to get her to come on the command “fish!” was torpedoed by his enthusiasm. But Nazar began to keep his fishing line—a piece of cane with some string tied to the end—on our pontoon, and each time he came to the marina would catch a snack for her.

As the other yachts continued on their journeys east and west, we grew roots, some of which entangled themselves with Nazar’s. In touristy Fort Cochin, hidden behind two narrow gaps in the back roads, his tiny home faces a rectangular patch of dirt enclosed by similar modest dwellings. At night, the community’s cows and buffalo are rounded up and corralled in the middle for safety.

Nazar, his wife and their three children have less living space in their two rooms than we have on our yacht; their home is damp and cramped, but it is clean and welcoming. Sakeena, Nazar’s wife, cooked Kerala fish and chicken biryani for us many times. She remained in the kitchen at first, but given time she and Thasni, the youngest daughter, were happy to sit with us. And despite their strict Muslim backgrounds, they became relaxed in Jamie’s company, even allowing him to photograph them.

When his oldest daughter, Nisni, was married at seventeen, Nazar proudly paraded us as his guests.

Nisni made Nazar a grandfather, and he couldn’t be happier with his darling granddaughter, Rihan.

“My Jesus tell me girl is good!” he says, thrusting the latest cellphone photo at us. “Maybe boy next time.”

In Nazarese the term ‘Jesus’ is a catch-all for Christianity, Islam and Hinduism.

“They all same,” he shrugged.

It was hard to leave India, but even harder to say goodbye to Nazar.

FTB People: Nazar 72 - followtheboat
GET EARLY ACCESS!Be The FIRST To Know About FTB