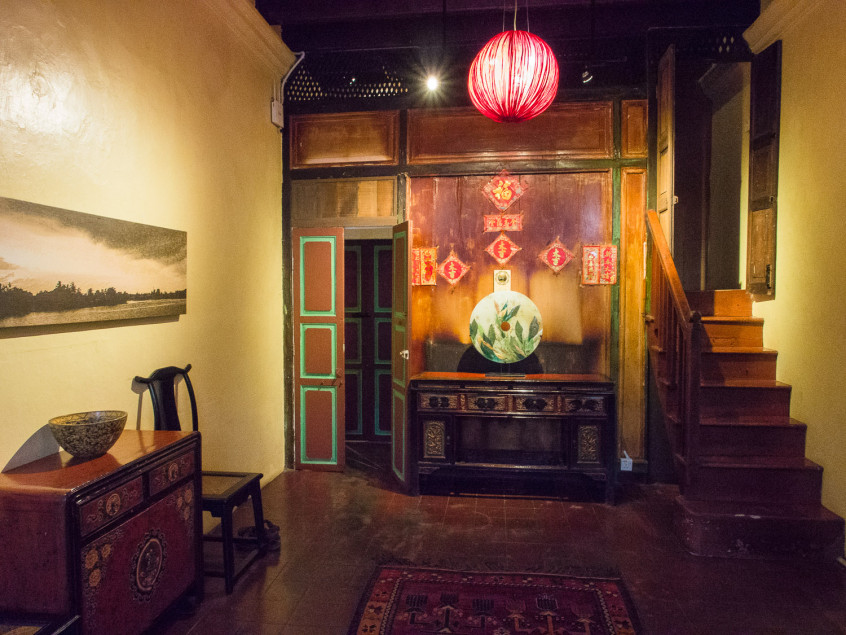 Malaysia’s sub-tropical climate means Penang’s capital is always warm and frequently wet, so visit any time of the year. Its fusion of cultures and religions fills the calendar with festivals, which means there’s always plenty to do.

Many travellers visit this beautiful city to acquire a Thai visa, and sometimes overlook its charm. But Georgetown, with its UNESCO-listed heritage, art scene and world renowned street food is so much more than a visa stop-over.

Like Calcutta in India, Penang was simply a few dwellings until the British decided to make it their base in the far east. Trade had been flourishing in the Malacca Straits for hundreds of years before their arrival, with travellers from Europe, China, India, the Middle East and all over south east Asia calling this part of the world home. The island of Penang was a simple base for local fishermen before the East India Company turned a malaria-ridden swamp into a thriving colonial town. Other cultures followed and soon the busy port of Georgetown attracted traders and chancers from east and west. The disparate groups that shaped the city are reflected in its diverse architecture, from colonial mansions and rows of shophouses to Chinese clan houses and elaborate temples. In 2008 UNESCO inscribed Georgetown and Malacca, its historical neighbour in the straits, onto the World Heritage List. Today Georgetown is a hotch-potch of languages, religions, food, art and cultural festivities. Step out of a Chinese shop house into a Hindu temple, mosque, or Christian church. Georgian mansions and Chinese clan houses dominate the area, but turn a corner and you are in Little India.

Don’t worry about finding the energy for all that sight-seeing, Penang was at the top of Lonely Planet’s best places to eat in 2014. And there’s no need to dress up to go out because the best food is found on the streets and in the hawker markets.

Follow your nose or a map, around the Lebuhs (avenues) and Lorongs (lanes), looking out for the ‘Marking George Town’ wrought iron sculptures which appear on most of its corners.

2. Stop at the elaborate and colourful Buddhist temples…

…and the dark and dusty shops selling an eclectic choice of international nostalgia from the last ten decades. Drop in on the joss stick makers and rattan weavers, and have a break in the aromatic coffee shops.

Buy a ticket for the beautiful Cheong Fatt Tze Mansion (the ‘blue’ mansion). There are limited spaces on the guided tours, at set times, so book ahead. The in-house guides really make the place come alive with stories and anecdotes to remember. If you’re feeling flush you can eat there, or even book a room in this iconic building.

It will give you a framework from which to start. Ask your guide to bias the tour towards history, culture, art, religion, food, or whatever floats your boat. Georgetown’s amusing and clever street art is often hidden away behind unprepossessing walls, ask the guide to take you to some.

5. Enjoy lunch from any of the roadside ‘hawker markets’

…where everyone stops for a bowl of something.

6. Head for the Pinang Peranakan Mansion

…to wander through its cool, wooden rooms for a flavour of what life was like as a wealthy trader.

7. Then walk to tarted-up Lebuh Armenia

…to browse its chichi shops, galleries and painted shop houses.

Pretty Yap Kongsi (clan house) is on the corner of Lebuh Armenia, but turn into Lebuh Cannon to gain access to Khoo Kongsi, the largest and most impressive of the clan houses. Look out for depictions of the ‘Filial Piety’ stories, mostly attributed to Confucius, which appear on four stone panels at the entrance.

If you are only in Georgetown for one night, head over to Tek Sen on Carnavon Street, just off boisterous Lebuh Chulia, for the best Chinese kitchen in Malaysia. There’s always a queue of locals and visitors outside, a sure sign you’re onto a winner. Resembling a hospital café, with white tiles, bright lights and scrubbed-clean aluminium tables, chances are you’ll end up sharing. But don’t let any of that put you off. Try dishes like ‘stir-fried dragon spinach with Judas’s Ear fungus and egg’, Char Siew Bak (‘home recipe double roasted pork with chili padi’), or stand-bys like stir-fried prawns with tamarind sauce. The somewhat tart homemade barley with lime drink will curl your eyeballs, but goes well with the food.

Walk towards The Red Garden night market, where you can buy beer, join the party and watch the increasingly cheesy live entertainment. If you like expensive bars on the roofs of tall buildings, then the Three Sixty Sky Bar on top of the Bay View Hotel is worth a stop, if only for the view. But without question, our favourite watering hole, and a favourite with Penangites, is ChinaHouse, “…a traditional compound of 3 heritage buildings, linked by an open air courtyard and converted into 14 spaces comprising shops, cafes, restaurant, galleries, live music and bakery…” It lives up to its own hype.

Most backpackers head for cheap ‘heritage’ rooms above the shops around Chulia Street, but you can’t beat the Armenian Street Heritage Hotel for five star professionalism at a budget price. Smack bang in the middle of museums, temples, restaurants and art, this 92 room hotel is clean, smart and friendly. From around £25 per night.

Rattan chairs and low tables pepper a shady veranda that runs along the five Chinese shop houses which comprise Coffee Atelier. There’s a smart coffee and tapas bar on the corner, next to a small art gallery. The final two buildings are divided into top and ground floor apartments. Heavy wooden doors open into high-ceilinged entrance halls displaying local antiques and textiles. Eclectic furniture styles and local artworks, varnished wooden floors, and original patination left on the walls all add to the authenticity of the buildings. If you’re just looking for some downtime, take a few books and spend your first 24 hours drifting between the art gallery, tapas bar and breezy rooms, occasionally stopping on the veranda for a chat and a coffee with Stefan, the Swiss proprietor. Prices from around £70 per night.

By all means stay at the Sarkies brothers’ Eastern and Oriental if you like inch-thick white linen napkins and staff who stand to attention. Prices from £120
For informal and impeccable service, stay in a restored mansion like 23 Love Lane. It is where Somerset Maugham’s characters would have met for an afternoon assignation over tea. Without a uniform or salute in sight, this tranquil hotel stays just the right side of pampered luxury. Rooms are lofty, the garden is leafy and the idiosyncratic decor adds charm. Prices from £95.

Twenty-four hours isn’t long enough to get under the skin of this unique city. You could spend a day just looking at its heritage buildings, another visiting the temples, mosques and Kongsis, a third could be entirely devoted to art. And, of course, not even a week is long enough to sample all that spectacular cuisine.

Stick around and let the city get under your skin. Put on the walking boots again, and explore the parts you missed on the first day. Or hire a bike. The Metro Bike tour is a great way to see the whole of old Georgetown.

Go down to the clan jetties for a glimpse into waterfront living. Present day occupants are descendants of those early nineteenth century pioneers.

If you have time, leave Georgetown and cool down at the top of Penang Hill. Stick to week days to avoid the crowds for the funicular.

The chances are you’ll be flying in on a short hop from KL or Singapore. Domestic and international flights are housed in one terminal. The airport is open 24 hours a day and there are plenty of shops and places to eat, so everything’s easily accessible and it’s not a bad place to wait for connections.
ATMs and foreign exchange counters dot the airport.
For the truly homesick, there is a McDonald’s.
The airport is 18 kilometres south of Georgetown, and it should be about a 25 minute drive. But heavy traffic can easily double or even treble the time. Penang’s roads, though wide and well-surfaced, are usually clogged. Make sure you have something to amuse yourself with during the drive.
Taxi: buy a coupon inside the terminal for a fixed fare.
Bus: unless you’ve plenty of time to kill, or it’s very early or late, be prepared for a slow ride. There are rapid services into Georgetown, but then you’ll have to find your hotel from the bus stop.

Starting at 06:00 and finishing at 00:30, ferries from Butterworth on the Malaysia peninsular run every 20 minutes. The fare is RM1.20/RM0.60 per adult. Two fast ferries depart from nearby Langkawi at around 14:00.

The Second Penang Bridge, officially named Sultan Abdul Halim Mu’adzam Shah Bridge, was opened in 2014. As the name implies, it is the second bridge which connects Penang to the mainland. Officially the longest bridge in South East Asia, it is a spectacular sight, particularly at night.

Language Depending on social class and ethnicity, English, Penang Hokkien, Malay and increasingly Mandarin
Time-zone UTC+8
International dialling code +60
Visas Tourist visa (for UK passport holders), usually for three months, issued upon arrival
Currency Ringgit Malaysia (RM or MYR). At time of writing around MYR5 to UK£1
Health Check with your doctor before travel. Current advice can be found on the Fit For Travel NHS website
Courses or boosters usually advised: Hepatitis A, Tetanus, Typhoid.
Other vaccines to consider: Cholera, Diphtheria, Hepatitis B, Japanese Encephalitis, Rabies.
Malaria and Dengue fever are in the area, so take anti malarial precautions.
Climate Penang is subtropical, so it’s hot all year, seldom dipping below 30°. The monsoons bring the most rain from April to May and October to November, when it tends to be sunny during the day, with rain in the evening. The hottest period is June till August. The best time to visit is in the driest months from late November till early April.

Hospitals and medical care in George Town are world class and a fraction of the price you would pay at home. Have everything checked, scanned, screened and measured in the luxury of Island Hospital. Results are mostly immediate, and you won’t have to wait months for an appointment. You can often be seen on the spot.

Penang Global Tourism. Everything you need to know about the island. Look for the downloadable pdf brochures in the sidebar, especially “Marking Georgetown” and “Penang Street Food” or pick up the hard copies when you hit town.
Penang Tourist Guides Association No. 7 Cannon Street (Lebuh Cannon), open from Tuesday to Sunday, 10.30 am to 5.30 pm (Closed on Monday & Public Holidays)

One Comment on “Top 10 things to do in Georgetown, Penang”

Top 10 things to do in Georgetown, Penang - followtheboat
GET EARLY ACCESS!Be The FIRST To Know About FTB