When we mounted our solar panels eight years ago we opted to hang them from the side, off the pushpit, at the back of the boat, as opposed to mounting them on a gantry or davits above head height at the back. The main reason for doing this at the time was to retain the lines of the boat, but there are more practical reasons for going down this route. 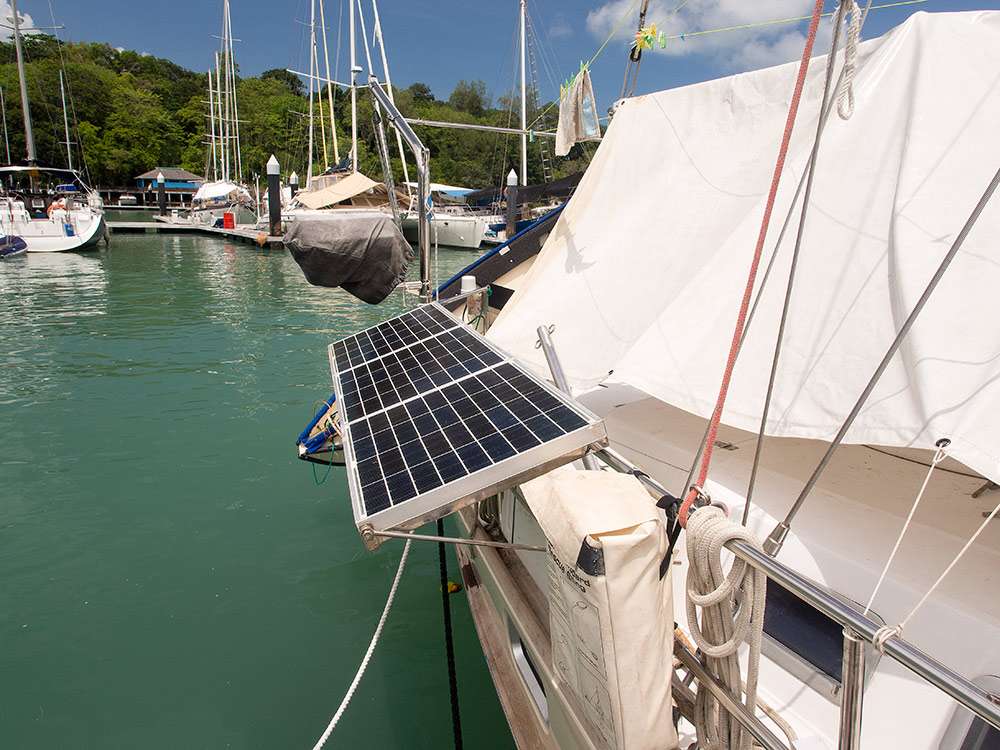 Since that time we too now have davits, albeit small, pivoting ones that swing in when not in use, but despite this, and despite an accident that I’ll go into later, we still prefer our set-up. We’ve been asked by two yachties in the last month to write this guide so, bearing in mind we have some time constraints due to prepping the boat and our video commitments, we’ve put together this simple picture-guide to our solar panel solution. We hope it helps others looking at doing something similar.

We have six 40w Kyocera panels, three on each side. On a good, clear, sunny day they can draw up to 15amps. We prefered the idea of breaking the panels up into smaller ones because of the shadow effect from rigging and other objects. If one is in shadow, it won’t affect the other two.

The panels themselves are mounted on aluminium frames. These are then bolted to a stainless frame that houses three panels each. There is a stainless strut between each panel on the underside.

The hinge is made up of two flat U-clamps. One side is welded to the frame, the other is free. It has two nylon ‘bearings’ that allow easy movement when swinging the panels up to their horizontal position. Although the two U-bolts are clamped together, they are only tight enough to keep the nylon bearings from falling out, not so tight that you can’t move them. There are two hinges either end of the panel that mount onto the top bar of our push-pit. For the record you should know that we extended our pushpit. I’ve seen panels hanging from guardwire, which works just as well but doesn’t have the structural integrity of a solid frame clamped to the pushpit.

Upper half of hinge welded to the frame, with nylon insert

Looking at the solar array when hanging in its vertical position, the bottom corner has a protruding bolt welded to it.

Bolt welded to lower corner with rod and nylock nut

A stainless rod with an eye at one end hooks over the bolt and this is screwed with a nylock nut to prevent it falling off. Again, this is not screwed tight. The other end of the stainless rod then slips into a bracket that is loosely bolted onto the lower bar of the pushpit.

As the solar panel is lifted up the rod slides through this bracket and, when in the horizontal position, is tightened with a wing-nut.

Bracket detail: rod goes through the eye at the bottom. All fittings are loose to allow movement when putting into position. Wing-nut not shown.

Although we have the wing nut we find that the angle and the weight of the panel prevents the rod from slipping, so we don’t have to do the wing-nut up.

Rod through bracket, which is attached to the lower bar on the pushpit, hidden in this picture. The big bar running across the picture is our spare tiller arm, ignore it (I couldn’t move it because it was piping hot!)

Also we had two rods either end of the array but this required two people to lift the panels up, with one at each end easing the rod through the bracket. Because the frame is strong enough we have done away with one of the rods and have found that using one rod only is enough to keep the panels in position. We have gone through some pretty shitty weather with the panels in their horizontal position without any adverse effect to the structure.

When the panel is in its vertical position, the rod sits upright

Advantages Of This Set-Up

This last point is worth bearing in mind, and I speak from experience. On my first day of solo sailing around the Greeks Isles, I anchored in a bay with terrible holding and didn’t set the anchor properly. At two in the morning I was awoken by people shouting and found that I had dragged across the bay and hit the bow of another boat. Fortunately no one was hurt and the only damage was done to, you guessed it, one of the panels. It has since been ‘fixed’ and still works and it is the only time the panel has come close to being damaged.

Despite this unnerving event, I would still opt for this solution to hanging solar panels on a boat. We’ve since sailed 20,000 miles across oceans with this set-up, often with the panels in their horizontal position, with no problems. You can catch a glimpse of the panels in this position on our crossing of the Indian Ocean here:

If you have any questions please leave them in the comments below and we’ll be happy to answer them. If you’d like to support us and our future video updates, come and join the adventure here.

How to mount your solar panels on the pushpit | followtheboat
7ads6x98y
We make weekly videos!