Contrast the nightmare of the M25 & M23 on a Friday night, with the sublime bays & coves of Turkey. Warm sea, good food, and excellent company. Mix up with gearboxes, unwanted mooring chains, divers and stargazing and you have an eclectic week of contrast, coupled with a mad moggy charging round the deck of Esper in the dark or hiding in the engine compartment.

Back again to Turkey! Blue skies, warm sunshine, the smell of the sea, but where was Esper? The over-enthusiastic taxi driver had dropped us in the middle of Marmaris Yacht Marina and we were surrounded by hundreds of boats. A quick call to Jamie; manic ride in a golf cart driven by one of the Marina security men and we were soon taken to “Oscar” pontoon. Esper was snuggled up to a French Catamaran (with dog) on one side and another yacht on the starboard side-the berths are very tight so fenders are essential!

We were given Jamie & Liz’s usual animated welcome and quickly established ourselves on Esper as if we had never been away. We were first introduced to Millyu their beautiful kitten. Playful and affectionate, she soon settled down with us as part of her “family”. 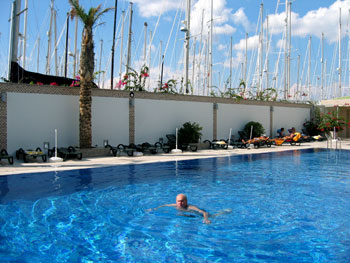 After debriefing we were taken to the Marina swimming pool-memories of swimming up and down looking at the blue skies and hearing the slatting of the rigging in the masts. Was it really only a few hours ago that we were in England? A poolside lunch fortified us for the afternoon.

Jamie was itching to get the repaired gearbox re-installed, but with us all huffing & puffing, sweating pints, trying to manipulate the 18 kgs of gearbox into position proved beyond our capabilities. Not only did the splines not line up but we could not hold the weight for very long as we were all tired. Mike started feeling quite sick with his head down in the bilge breathing in fumes. We eventually gave up and vowed to try again the next day when we were refreshed. The evening was spent in the very smart bar and then the International Restaurant. We slept like babies on our first night aboard thanks to a missed nights sleep due to the flight coupled with the comfort of Jamie & Liz’s after cabin bed.

The Folks Are Back In Town | followtheboat
7ads6x98y
We make weekly videos!