Finally, after two months of shaking down Esper post her three year snooze in India, Liz and I had an opportunity to kick back and relax and enjoy the Maldives for what it is. Mum and Dad Furlong were out for two weeks and we looked forward to this break, referring to it as a two-week holiday from the trials of boat maintenance that we’d had to contend with since leaving India. The problems were not unexpected, of course. Leave a boat alone for an extended period and she’s bound to develop some issues and we were not naïve to this. Our three months in the Maldives were always going to be about shaking the boat down but we felt we needed a couple of weeks off. 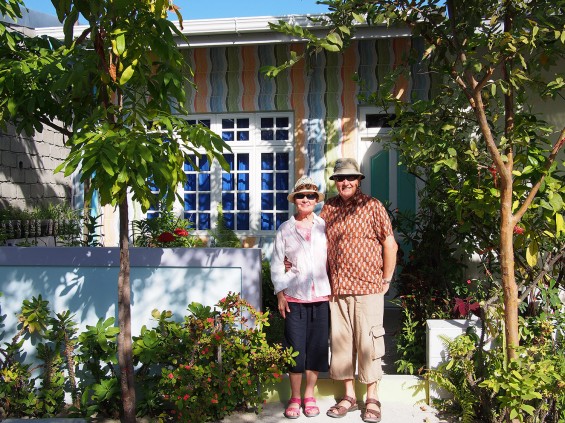 Mum and Dad have visited many times and know Esper intimately. More to the point they know how to relax on board. This trip Mum only attempted the washing up once, but she was soon ushered out the galley and back into the water for a dip…

South Male Atoll
Our plan was simple: to circumnavigate the South Male atoll over a two week period. This small group of islands is around 35 miles in length and 20 miles across, consisting of both inhabited and resort islands, with a lot of reefs in between. Here, then, is a breakdown of the places we visited and the usual irritations of continuing to shake our boat down!

This was a late afternoon sail from Hulhumale, but motoring out of the anchorage the prop was still playing up. When we’d left the boatyard there was no tork, no power, lots of unusual wash and no steerage. Putting it down to a plastic bag that had wrapped itself around the shaft I thought nothing off it until we left Hulhumale. The problem persisted and was something I was going to have a look at at the next anchorage.

As anyone who’s sailed through reefs and atolls will know, sailing in the late afternoon is a little foolhardy. The sun is low in the sky, making it difficult to spot reefs. Still, it was a simple case of finding the gap in the coral to anchor safely in the lee of the island. Yeah, right.

Velassaru is a resort island. One of the issues with anchoring by a resort island is that, because they are privately owned, permission to anchor is needed by the hotel’s front office. We tended to email or phone through at least a day in advance and, having done this with Velassaru, approached the resort without further thought. As we arrived we phoned through once more to confirm our arrival, only to be told that we were no longer allowed to anchor! “You can’t do this to us”, I complained. “I have two elderly people on board (not a term I normally use to refer to my parents but I was desperate!) and you are now asking us to go out into the reef, which is putting my boat in danger” etc etc. After much to-ing and fro-ing and waiting outside the reef as the sun went down they eventually gave in and sent out a man in a boat to guide us in. Thank god they did, our depth sounder showed less than a metre under the keel and we had to avoid a couple of bommies that we couldn’t see from the boat.

Look carefully. When the bottom blade is aligned, the others are misaligned. Can’t believe I took this photo and didn’t notice this. Won’t be making that mistake again.

Next morning I popped under the boat to check the prop. My suspicions were realised when I noticed that one of the blades was slightly out of line from the others. Yep, seems I had put back our prop incorrectly whilst in the boat yard. What a twat!

I phoned through to the resort island and got in touch with the dive school based there. They agreed to lend me some dive gear so I motored over to the main jetty to meet the dive master. Embarrassingly the outboard conked out upon my approach, a recurring theme this summer. The dive master took me to his store, grabbed some gear and then said he’d send over another diver to assist me. I was towed back to Esper by the same man who saw us in last night, along with a couple of his mates, my gear and the diver who was to assist me in my underwater operation.

Our prop is a ‘feathering’ Maxprop. The three blades are separate, held together by serrated gears, and I had put them back on incorrectly. Our job was to take the blades apart and realign them. Not something you want to be doing underwater since any one of the parts could slip and drop to the seabed. The diver who assisted me didn’t speak any English but underwater he understood my gesticulations and together we undid the nine Allen bolts and their split pins, realigned the blades and put it back together. Correctly. I only dropped the Allen key once, and the diver was quick to retrieve it from the sea bed.

Once finished I returned to the dive master to settle whatever bill he was going to charge me for his diver and the gear I’d borrowed. “Money? You don’t owe me anything,” he said. “We’re just happy to help”! I couldn’t believe it, I was expecting a bill of $300!

To celebrate we went ashore that evening and spent $300-odd at the restaurant! Sundowners at the sundowner bar and then a rather splendid dinner.

Happy, we danced our way back to the dinghy to row back to Esper (the outboard was still playing up). Mum’s efforts to stand up and look for the moon ended with her on her back as the rest of us paddled back to the boat.