A 6.30 wake up call and I was in the galley slaving over a hot stove knocking up an English breakfast. It’s been over fifteen years since I cooked bacon and eggs, so I think it was a greasy affair for those who ate it. Michelle had to make an early start on her journey back to London so we said farewell to her and saw her off as skipper took her to shore. It was sad to see her go as she’d become a good friend in the short space of time we knew her. I hope we bump into her again in the Canaries.

To make up for Michelle’s absence we arranged for Tim to pick Mum and Dad up in the tender and bring them to the boat for afternoon coffee. The crossing was still pretty choppy so we had to kit them up in the wet weather gear. I skived for a few hours whilst Tim and Jason worked around us. It was good to spend some time with Mum and Dad but frustrating that I couldn’t spend some time with them alone. The original plan was to all go back to shore for some cream teas but Paul had the others working until late afternoon, so by the time we made it in it was gone 5.30pm. Very annoying.

Mum and Dad said farewell and left the four of us to wander down the high street and head to the yacht club for local ale. On the way Tim and Paul had a massive row, which started with Tim politely telling Paul he didn’t appreciate being called Percy and could he call him by his proper name. Well, that was it! The skipper completely flipped and screamed at Tim that he was skipper and could call him anything he wanted. He claimed Tim was just a boy and that he was twice as old as he was, that he knew nothing…….oh my god. It was bad. Jesus, you should have been there. 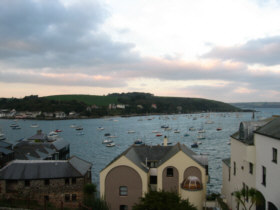 I’ve never, ever heard anyone talk to anyone like that. Not wanting to be part of it I walking off ahead but it got so bad I tried to step in and insist they stop arguing because they were causing quite a scene. This made no difference to Paul who by now was telling Tim his parents had brought him up wrong and that he needed to change his attitude and other sh!t that was quite frankly bang out of order and completely uncalled for. Tim’s a top guy but this clearly knocked him for six and when we hit the yacht club it was pretty obvious he was really upset. To top it all the yacht club was so stuck up its own arse with la-di-da’s talking bollocks about nothing that we had to get out.