If we thought the impact the film was impressive, the response from yotties afterwards in their support of Sam and his voyage was overwhelming, encouraging and heart-warming. 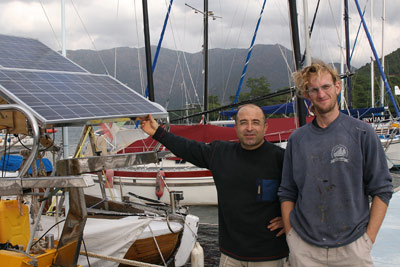 Karen of s/y ‘Antigua Lady’ started organising store provisions through a number of different means. She rallied together the women sailors through the Ladies Coffee Morning (sometimes referred to as ‘Stitch and Bitch’) and got them to donate food stuffs. Karen of s/y ‘Nisroc’ even organised a sponsored Salsacise class! The idea of watching ten women in leotards tarting around to salsa was an attractive one but unfortunately I was too busy to attend that fund-raising event. Here’s hoping she puts on another one.

We ran a raffle, which raised funds for a new solar panel. The panel was then fitted by Demir Marine and Macit Yuksel, Turkish technical marine businessmen who offered their services either for cost or for nothing in order for the new solar panel to be mounted and wired on Cindik.

Marmaris Yacht Marina very kindly dropped all marina charges for Sam, so his mooring, electricity and water was free. I think the Guiness Book of World Records should be notified about this one. Have you ever heard of a marina doing this before?

Other yotties visited Sam over the next few weeks and helped him on a whole host of different jobs, each lending their area of expertise of boat maintenance. There were so many people who helped, from yotties to marina staff to technical service companies, that we had to set up a big thanks page on the People’s Navy website.

Finally, after weeks of preparing his boat for a solo voyage down the Red Sea and into the Indian Ocean at a difficult time of the year, Sam recruited a new crew member! Poppy, of s/y ‘Free’, agreed to join Sam for the majority of the journey. Poppy writes beautifully and contributes to the progress log, as well as helping Sam through a difficult journey. As I write this they have passed through the Suez Canal and already sent a number of updates and pictures. Check it out here. 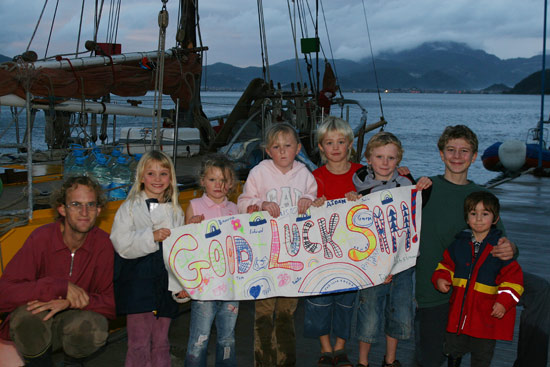 We continue to update the website frequently. The pledges come in on a daily basis and we have recruited over forty boats to the Virtual People’s Navy. One yottie who was based in Marmaris, Mike of s/y ‘Harriette’, sailed down to Kemer for the winter, took a copy of the documentary and showed it to forty live-aboards in Kemer marina. This kind of action by other yachtsman was precisely why we set up the Virtual People’s Navy. Good on you, Mike.

As for Liz and myself, we were so inspired by meeting Sam and the support of all the people both here in Marmaris and from around the world via the website that we are now considering following in Sam’s footsteps next year, and possibly doing our own People’s Navy rally into the Indian Ocean.

In the short term, however, we need to maintain the level of support we have received recently and ensure that this issue remains in the forefront of peoples’ minds and not let it become yesterday’s news. We cannot let the British government get away with this atrocity. It is a reflection of the absurd and awful nature of UK foreign policy. Lies, deceit and bully-boy tactics will not be tolerated. This is the twenty-first century, not the Dark Ages, and yet we still have to fight for the single god-given right of freedom. It completely baffles me

The People’s Navy – What Happened Next | followtheboat
7ads6x98y
We make weekly videos!