There are various theories about the origins of Kolkata, one claiming a reference to the port in ancient Chinese manuscripts, another that it appears in Bipradas Pipilai’s classic fifteenth century Hindu work ‘Manasa Mangal’, still others that it is listed in Akbar’s ‘Ain-i-Akbari’. Whatever Kolkata’s origins, it is likely to have been inhabited in one form or another for thousands of years. But it was the British who, at the end of the seventeenth century, began the development of what is today a lively, modern state capital. 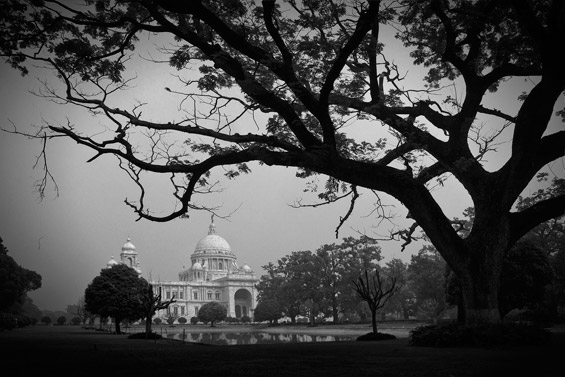 In 1690 Job Charnok, of the British East India Company, decided this spot on the banks of the Hooghley River would make a suitable base from which to trade. In 1698, when the company purchased the villages of Sutanuti, Gobindapur and Kalikata, construction began. 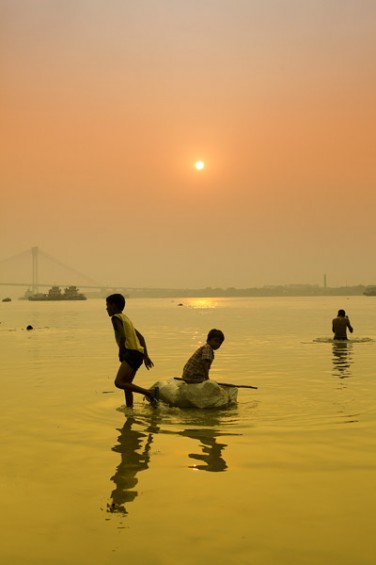 The Hooghly River, the lifeblood of Kolkata

We arrived in the city late in the day, and no-one was more relieved than me to discover the hotel I’d booked wasn’t half bad. I chose the no frills Hotel Trimoortioff Elgin Road, because once again the Fairlawn Hotel (a Kolkata ‘institution’ according to the cognoscenti) was fully booked. Ignoring the Lonely Planet’s long list of budget hotels in the backpacker haven of Sudder Street, I searched for a base further away. Its common parts were basic, resembling a cheap serviced office corridor, but the kingsize bed, crisp white sheets and modern, faultless bathroom of the ‘super deluxe’ room made up for no view and no hotel lounge. Speaking to the owner at the end of our stay, he explained that all the hotel’s resources had been concentrated on comfortable rooms and efficient room service. At 8190 INR for three nights in a state capital, including a/c and breakfast, I’d happily recommend the hotel. (In my experience the best room in a cheap hotel beats the worst room in a top hotel any day.) The room service was fast and faultless and the food, particularly the local breakfast, excellent.

The next morning we laced up our walking boots and set off to discover a new city. First on my check-list, and not far from the hotel, was the Victoria Memorial. Conceived by Lord Curzon and built long after the British had moved their capital to Delhi, the building was opened in 1921. It is said to be India’s modern day rival to the Taj Mahal. The building was closed when we visited (if you want to see inside, avoid Mondays) so we contented ourselves with a walk round the lakes and garden. It’s an imposing piece of late Victoriana in white marble, extremely well tended – not a crisp packet or plastic bottle in sight – and cleverly showcased among the gardens and lakes. Although impressive for me it lacked a little magic; the Taj Mahal it ain’t.

Early in the morning we lace up our walking boots; the locals have their own rituals to contend with 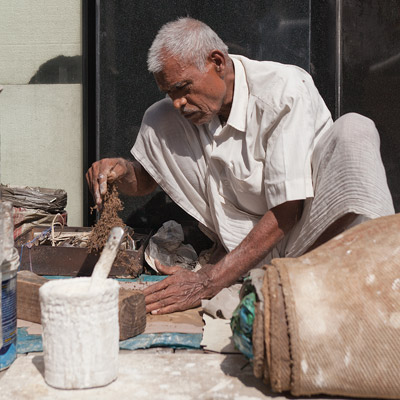 Kolkata is packed with monuments to British architecture: churches litter its lanes and streets, commercial buildings dominate the BBD Bagh, and the fabulous mansions of the East India Company’s mandarins dot the city. Overlooking the BBD Bagh the ornate Secretariat of West Bengal Government building is the most impressive. Originally known as the Writers’ Building, it was built in 1790 to house the clerks of the ubiquitous East India Company. Scattered throughout the city, and in various stages of disrepair, these gorgeous reminders of an earlier time (often with Georgian windows and balustrades) are squeezed between new houses, offices and shops.

Walking north from the Writers Building we were thrilled to stumble upon the charming and unpretentious Armenian church, a welcome detour from the choked alleys of Kolkata’s markets. Its understated white-washed walls and wooden interior lent it a Mediterranean feel. The entrance was manned by guards and officials (although there is no entrance fee), and a cleric of some sort bustled about inside the church. We were the only visitors, a rare luxury in India. 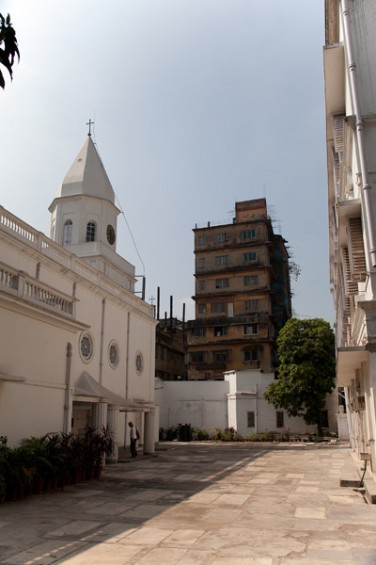 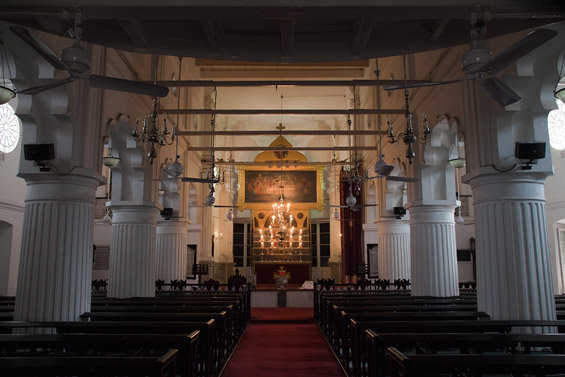 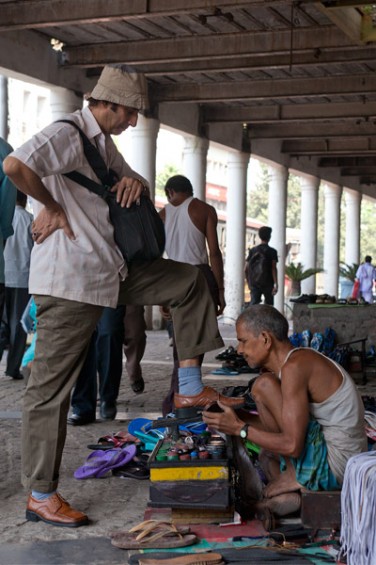 Another memorable stop was Tagore’s House. Built in 1784, it was the family home of India’s Nobel prize winner, Rabindranath Tagore, and proved to be another quiet haven. Living in the lap of luxury, their every whim serviced by silent servants, it is no wonder the family had time to concentrate on poetry and art. Growing up in this delicious mansion must have been a joy. It is now a university and shrine to all things Tagore.

In the late afternoon we stopped off at Babu Ghat on the banks of the Hooghley. Hidden behind a grubby archway, wide steps lead down to the river bank. Here some of Kolkata’s poorer residents wash their clothes (and themselves), prepare evening meals, lie down to sleep, and offer pujas. Incense smoke drifted in the darkness under the roof of the arched entrance gate, where people sat quietly on the floor and benches. We passed through this area of meditation to the river, and Jamie went off, camera in hand, to talk to the men drying themselves at the top of the steps. Further down and away from the naked men, I drew an inquisitive and hospitable crowd around me. 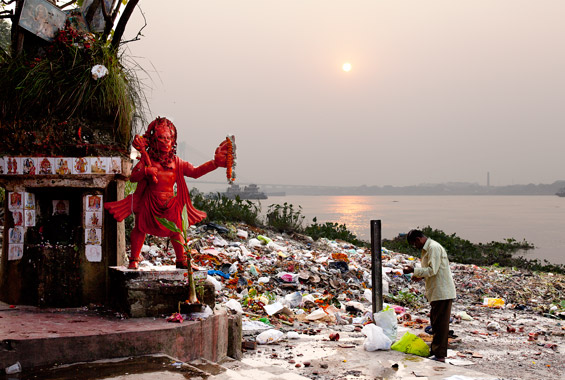 Religion and rubbish come together at the Hooghly

Beginning to tire after eight hours of walking, we headed towards the Maidan (a cross between London’s Richmond and Regent’s Parks) for an off-road stroll back to the hotel. As the sun made its rapid descent, the sky began to fill with black kites, some of them tiny specks a mile high. At first we took them to be of the raptor variety, but as we emerged from the undergrowth into wide grassland we saw a hundred boys and men wrestling with long twine that stretched into the distance. They were flying kites, and the reason the kites were black was because they were all made from bin liners wrapped round bamboo struts. The passion for kite-flying is something we have come across in all of the cities we have visited in India, evidence of this enthusiastic pastime often to be seen tangled in the wires and cables slung between narrowly spaced buildings. We picked our way through knots of bright-eyed fliers, following the tight lines reaching into the gloaming. As the light began to fail I walked straight towards an invisible taut line, and was saved in the nick of time from a nasty garotting by Jamie’s quick reactions.

With the faint domes of Victoria’s memorial in front of us, our aching feet began to complain, so we jumped into a taxi for a quick trip back to the hotel, where we rounded off the day with room service, HBO and sleep. Bliss.

How far would you drag your dinghy for a beer? •

Have you ever Med-moored? We used to do it all the

We've made it as influencers. Jamie sporting the l

Our first Spackerel in years and enough steaks to

Looks idyllic, doesn't it? These are the "Bajau L

Home for a week. The only sailboats sailing in Sab

The Kites of Kolkata | followtheboat
7ads6x98y
We make weekly videos!