If I told you today I discovered somewhere as incredible and mind-blowing as Machu Piccu, would you believe me? Welcome to Knidos.

Knidos was once a great city that served as an important stop-over for trade vessels travelling between Asia and Europe. The site dates back many hundreds of years before the concept of Christ was even invented but it’s played host to Christians, Muslims, Arabs, Romans and other civilisations, all making the most of Knidos’s strategic position.

The great thing about Knidos is the lack of tourists. Because there is only one road leading to the headland very little road traffic bother to make the journey. Therefore the majority of tourists come by boat, and since the site Knidos sits on is so remote, nestled between a mountain and a hill at the end of the headland, there are very few people walking round the site. 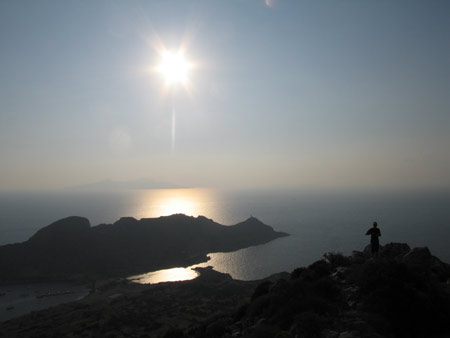 Looking south from the top of Knidos

What makes Knidos so special, however, is the abundance of archaeological and architectural evidence of past civilisations. I’m not just talking about the odd crumbling column or fenced off pile of rubble. No, I’m talking about semi-excavated mosaics, entire houses with perfect marble facades, half preserved churches, columns and pillars still standing. I’m talking about every footstep kicking bits of pottery, marble and stone that has been left untouched for hundreds and hundreds of years. One minute one is looking down into an ancient Roman house, then round the corner there is a Christian church, and round the corner again there is Arabic inscription carved across the bottom of a Corinthian column! Apparently there is a Scandinavian archaeological team working on the site but Knidos is a many-tiered city so their work is really cut out for them!

Chris looking north from the top of Knidos

The highlight, however, was making the bold decision to scamper up the mountain, across the tiers of ‘streets’ and work our way up to the Acropolis at the top. Thank god I had my walking boots on because it was hard going. The mountain gets steeper and steeper the higher up one climbs and eventually it’s a case of scrambling up with both feet and hands. Every now and then we spot an odd sign-post pointing towards some ungodly steep ‘path’ that is only accessible with climbing ropes and crampons. English Heritage this is not!

As we approached the summit Chris and I were the only ones in the vicinity save for a donkey. The top though, my god! Behind us was Knidos, the sea and a lazy sun sinking in the late afternoon sky but ahead of us, at the top of the summit and over the other side, was the other side of the peninsular that looks out across Mersincik and surrounding areas. Over the top of the peak was a sheer drop of many hundreds of feet and the mountain shadow cast across miles and miles of desolate land. Chris and I edged our way across the lip of the peak to climb a bit higher and search for the Acropolis, which turned out to be a pile of stones (perched on top of the mountain and subject to many earthquakes over hundreds of years, wouldn’t you be?). We spent close to an hour just taking in this fantastic sight, as well as taking hundreds of shots on the camera that of course do no justice to the beauty of this vista. 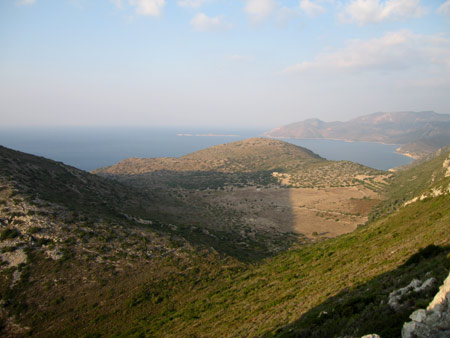 After catching our breath and realising the sun would be setting soon, we made our way down. Whilst the ascent probably took us an hour or so, getting back down must have taken us no more than 15 minutes since most of it was spent surfing our way down loose rubble.

Over dinner we decide that a night-sail would be a bit of fun and, with the lack of wind and clear skies this would be an easy one for me to skipper, even with two inexperienced crew on board. We discuss the use of springs in order to get us off the jetty which we decided to use for the second night and after 2 hours sleep we were up at 2am, casting off. The most difficult part of the journey was getting out of Knidos harbour since it hosts an underwater barrier to north side of the entrance but, once out, we were free to get the main out and motor sail our way round the coast towards Datcha. 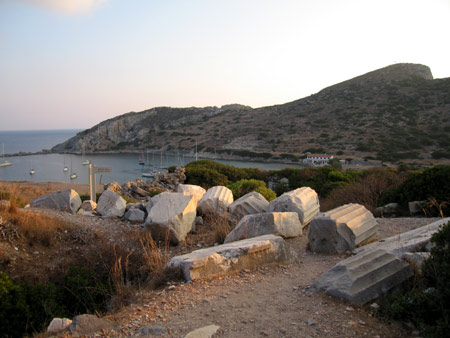 The sun finally sets across Knidos

And if that one doesn’t work then try this google-hosted version: