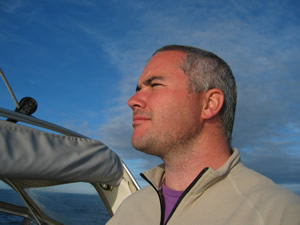 With slightly more favourable north westerlies and some predicted westerlies today was the day to make the big jump across Biscay. Refuel, restocked and a demon bean and tuna curry ensured general ripeness in the boat.

Jezabel, the new lure, was put to the test but hadn’t caught anything by the end of the day. Load of crap.

We were seen off by the biggest pod of dolphins I had ever seen, not only coming from all directions but swimming with us for miles. The sea state was rough, making cooking an absolute bitch, so everything was chucked in the pressure cooker to avoid spillage. Hoorah for pressure cookers.

Next day: no catch from Jezabel. My fishing was becoming an onboard joke and I needed just one catch to prove my fishing skills to the others. We hit lots of little squalls and were still having to put up with north westerlies. We managed some sailing with the engine off but otherwise we were motor sailing. BBC R4 had predicted some south westerlies but we were yet to see them.

I enjoyed a fantastic night watch with the moon playing hide and seek behind storm clouds and when I awoke next morning the wind had finally come round. Not quite the south westerlies as predicted but a marked improvement and the sea state dropped back to moderate, thank god. Jezabel just wasn’t pulling in the results, so I tried the paravane with 4m of trace and the thing shot down into the water pulling what must have been its maximum poundage. I decided to pull it straight back in as we were sailing at over 7 knots.

I think I need to consult my fishing book I received for my birthday, or else speak to Matt, my fishing guru. Still, at least the motor’s off and we’re enjoying good sailing.

Lots Of Dolphins But No Fish | followtheboat
7ads6x98y
We make weekly videos!