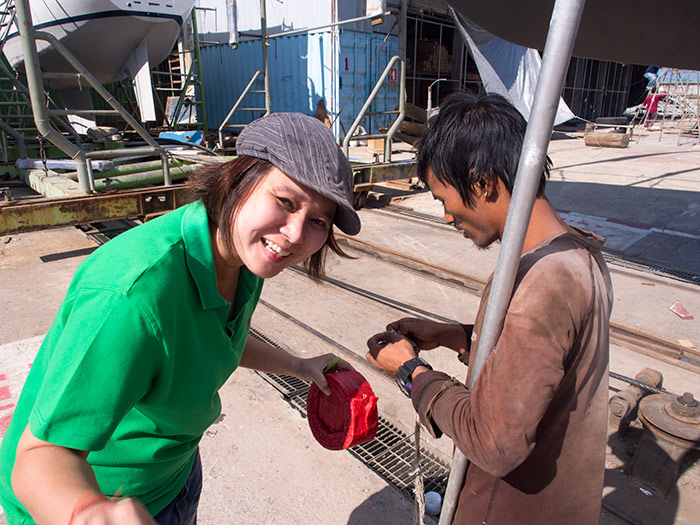 We met Duncan and Caroline in Panang last year. Duncan approached us asking for advice on where to haul out and do work on the boat, and we recommended PSS. Fast forward a few months and we were neighbours once more, this time in cradles on the hard. They are two very splendid people and we became good friends, which is why it was sad to see them go. Still, they were itching to get back in the water (who isn’t?) and it was a nice little send-off, as this video clip shows: Someone believed our story about Christening a new teak cockpit with red wine! Photo: Caroline Woodhead

Shortly after uploading this clip we received an email from Duncan and Caroline. They had taken with them two mutual neighbours, Sharm and Rumi, two Korean travellers who had never been sailing before. We encouraged them to go with Duncan and Caroline (you might catch a glimpse of them in the video when the boat is in the slip). On the eve of my birthday we all sat round discussing how the Koreans should go our for a test sail to see if they like it (I’m happy to report they did). We filled Sharm and Rumi’s heads with sailing yarns, stories and traditions. Like the one where it is good luck to spill red wine on Maggie Drum’s brand new teak cockpit. It seems Sharm believed fell for it, judging by the pic Caroline just emailed us! Jib, office worker at PSS, and one of the yard boys get the crackers ready