Back in Amsterdam we made some final preparations to the boat and were joined by Leo. The forecast was looking ok: we’d been holding off for a few days because of storms across the Humber and Thames shipping regions. The grab bag was put together (a waterproof container that contains essentials in case of emergencies) and we hoisted Jason up the mast for some last minute fixing, despite his fear of heights. The spreaders needed taping up as they had ripped the UV filter off the yankee (the front sail), and we had to take the sail down and replace it with an older one. Obviously this was far from ideal since this was going to have to require some repairs in Falmouth, at a cost.

At 3pm we were ready and started making our way through the canals, past Amsterdam and back to Ijmuiden where we were to wait our turn to enter the lock. The weather was getting progressively worse but everyone was itching to get going and finally hit the open waters. When the green light indicated our turn to enter the lock the sense of nervousness and trepidation increased as the conversation dropped. Once the gates had closed behind us we had a fifteen minute wait as the lock filled and rose to sea level. We were all looking at the red traffic lights and waiting, wondering what the open water had prepared for us. Personally I was shaking but this could have been something to do with the five cups of coffee I’d drunk that morning. When the lock had filled the road bridge swung round and the traffic lights turned green. Immediately the water turned choppy as I unleashed the temporary mooring lines (I’ve assumed foredeck position), gave the thumbs up to the skipper, who was particularly and uncharacteristically quiet, unleashed the rear lines and made our move out into the open sea.

As we passed two Greenpeace speedboats we spotted the sea walls ahead. Already there was a swell and we spotted waves smashing over the top of the walls. Finally we were in the open water and the nervousness increased. I’m not normally nervous of the sea but with the sight of crashing waves and Paul’s comment “this does not look good” my confidence didn’t increase! On top of this the Navtex (a satellite-based system that churns out printed weather reports) was predicting strong westerly winds and storms of force 7-8. This really was not good. For starters this meant we had to head north west to get anything from the wind and secondly storms are a scary thing at sea.

We raised the sails fairly quickly and Michelle and I disappeared into the galley. With the central heating on full, we quickly worked up a sweat in our waterproofs frying onions and garlic. It was then that the sea sickness kicked in and I had to go up on deck every few minutes to get some fresh air. I noticed no one else other than Jason even bothered to come down below since no one had yet got their sea legs. Perhaps because of this only half the crew on board bothered eating. The rest of us weren’t hungry and there was a tense atmosphere aboard.

The wind picked up, so I did my waterproofs up and took the helm. The weather reports had been predicting storms and we had some fun and games with the sails, of which we had four to choose from: the yankee, the staysail, the headsail and the mizzen. With a new watch system in place we took it in turns to wake the skipper up and worry him with questions and concerns regarding the direction of the wind, the position of the sails and the big waves that were scaring the sh!t out of me. Unfortunately Paul started displaying some familiar traits with the amount of screaming, shouting, cursing and swearing at his crew, making some moments rather more uncomfortable than they already were. I’ve only had experience of three skippers in my life and two of them have displayed extremely short tempers. Why is this? Are all skippers like this? I know it’s not just me since Leo was getting it in the neck more than anyone else, and Leo was just along for the ride. Who knows? It’s a mystery to me.

On the first night of watches I had partnered up with Michelle and I was in safe hands, which was just as well as we soon found out that there were no compass lights! How the hell were we supposed to follow our course if we couldn’t see where we were going??

Michelle’s confidence was infectious, however, and after our first two hour watch at night I settled. The weight of the boat gave the steering a delayed reaction and a fair bit of weather helm (this is the amount of turn on the wheel to counter its movement) but with the two masts and four sails it was a smooth ride. Well, smoother than a lot of smaller yachts. Even so, the wind had picked up and the next two watches into the morning brought some scary sh!t. We’d hit a force 8 storm and the frothing sea was welling up. The air was thick with salt and we were caught at a difficult angle with the waves coming side on. If one of these were to break over the side of the boat then it would have been game over. I took the helm and got to grips with what was occurring. With waves reaching five metres in height, each crest boiling with white foam and threatening to break over the deck, the boat climbed and lurched and bobbed but took each wave in its stride. The sick feeling in my clenched stomach ebbed away and was replaced with a thrill as I managed the boat out of the worst of it. 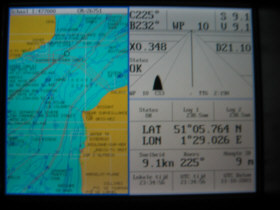 It was not over, however, as we were now struggling with a lack of speed and control. A few watches later and a quick look at the surrounding oil rigs told us that we had made very little progress over the last 6 hours. The GPS plotter on the laptop had drawn a tight loop in the middle of the North Sea, 130 miles north west of our departure. We’d made good progress in the last 24 hours. It was just a shame it was in the wrong direction! We hadn’t made a mistake though – the loop was the tack we had to make in order to change direction.

Tacking itself presents problems down below. For starters your body switches position in the bunk when you’re (supposed to be) asleep and my bunk became near impossible to sleep in. My bunk, along with the three others, is at the bow of the boat and is subject to the most amount of banging and slapping and rolling. With my head firmly wedged in the far corner of the bunk I lay there listening to water sloshing about my head whilst my stomach went on a never ending roller coaster ride. On top of this were the auditory hallucinations to contend with, experienced by not only myself but by Michelle and Jason too. Michelle heard the cat talking to her, Jason heard chickens and I heard music. Later on in the trip we heard children playing in a playground and men talking. All very odd.

With the worst of the storm over but still very rough we eventually hit the outskirts of the shipping channel at night. I’ve talked about sailing at night before and what a surreal experience it is. The shipping channel was no exception to this as huge lit-up floating palaces drift silently past. In the daytime this passing freighters on the horizon can look like huge skyscrapers with all their masts and chimneys silhouetted against the rising sun. At one point I spotted a Jawa vehicle, a huge lumbering slab of steel with no defined shape except a wedge for a bow and a helicopter on deck. During the night all one can see are the lights from ships and oilrigs. With their flashing lights oil rigs look like huge landing space ships, whilst the freighters are indistinguishable other than a couple of lights and their appearance on the radar. At one point it seemed as though eight of us were all aiming for the same waypoint and evasive action had to be undertaken by both large tankers and us. Another time whilst Tim and I were on watch at night we were followed by what we thought was a sailing vessel. As it approached it switched on huge searchlights that flood lit our deck and caused us to panic slightly. This was an unorthodox move so grabbing the VHF I radioed on channel 16 (the channel all boats are tuned into for emergencies and updates) and asked what they were doing. After two attempts they didn’t answer but strangely the vessel took a sharp turn to port and shot off at great speed. Very odd.

One Comment on “Crossing The North Sea In A Force 8!”

Crossing The North Sea In A Force 8! | followtheboat
7ads6x98y
We make weekly videos!