2008 has been a tough year for the Turkish tourism industry. We’re constantly asked by baffled locals why this is so as holiday homes stand empty and numerous day-tripper boats tied to the town quays are not being chartered. We’ve been vaguely keeping abreast of the economy in the UK, following this ‘credit crunch’ thing (a dumbed-down way of saying ‘recession’ if you ask us) so perhaps it’s this that has caused the Turks’ woe. Maybe Turkey got too greedy, invested money in holiday villages that now stand empty, filled their town jetties with hundreds of day-tripper gullets that can’t find business, and increased the price of a bottle of Efes from 2 lira to 5 over a 12 month period. That’s a possible explanation, because the basic benchmark I use, a bottle of beer, has increased by 150% over three years in many locations (it’s still less than 2 lira in the supermarket). Perhaps tourism in Turkey has reached saturation point and is now levelling off, or it’s simply that tourists are returning to the old favourites like Spain and France. 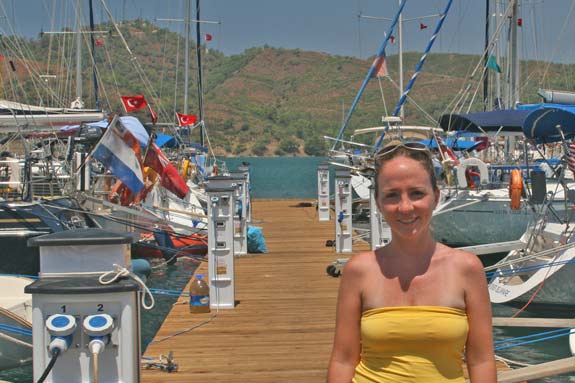 None of the above applies to Banu, a 28 year old Turkish woman who has seen her business go from strength to strength in Fethiye. Liz and I had heard about Yacht Plaza Hotel from a number of yotties, with Caroline from ‘Mianda’ describing the proprietor as a ‘tiny girl with a big heart’. Intrigued by the success of her family-run hotel and sailing business, I managed to collar the petite Banu and, over a coffee, find out how a hotel on the outskirts of the town could be so popular and why Yacht Plaza Hotel is always on the lips of yotties when visiting Fethiye. 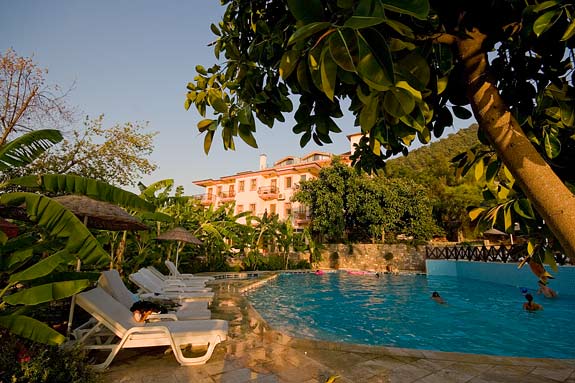 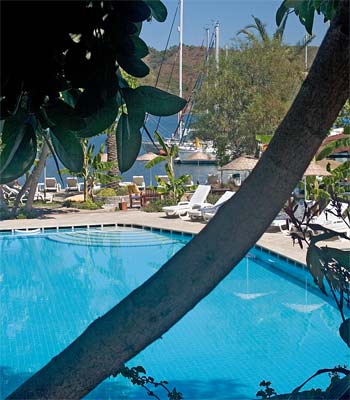 Finally, a place for yotties to swim in that isn't 99% sodium!

Banu was actually born in what is now the restaurant. The old two-story house sat on a couple of acres of land by the water-front and when Banu’s father decided to build a hotel on the grounds, he chopped off a story from the house to give his new hotel guests a view of Fethiye bay. The family home now houses a kitchen and restaurant, with Banu’s birthplace now a fireplace, with a four-story hotel behind, a swimming pool to the side and now a new jetty with 30 berths. How did that happen?

Originally called Han Hotel, named after the owner’s two children, Banuhan and Batuhan, the name was changed to the Yacht Plaza Hotel when the business was passed down to the siblings. Batu takes charge of the hotel, which remains busy all year round, whilst Banu looks after the restaurant, bar and marina. Back when it was Han Hotel there was just an anchorage at the foot of the grounds, yet it was clear yotties were coming in to use the facilities so Banu built a Y-shaped jetty to accommodate the cruisers. As business thrived so Banu was able to redesign the facilities which culminated this year in a new jetty, complete with water and electricity. Wi-fi will be added later this year. 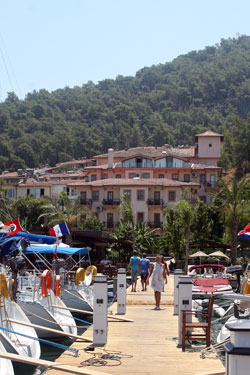 What makes Yacht Plaza Hotel so special, however, is the fact that Banu has not lost sight of the importance of intimacy. With no plans to expand the jetty, 30 boats is manageable to cater for, and with Sunsail now using it as a base the restaurant is never short of a punter. Not surprising since the food is great here. Neither should one forget that Banu is a keen sailor herself. “I try to get out sailing as much as I can”, though fitting this into her busy schedule can be quite difficult.

Banu and Batu’s progress has not been without its problems, however. Despite running their family business now for over 20 years they have had some run-ins with the local marina next door, who have only been here for five years. When Banu told me of the bribes Ece Marina have been offering her in order to close her down, I was disgusted. She then went on to explain that in retaliation to her not taking the bribe they built a jetty so close to hers that it makes it very difficult to get boats in. “They did it on purpose. The manager of the marina is always poking his nose over the fence to check how many people I have in the restaurant.” A cursory glance around Yacht Plaza Marina in the evening normally sees a near-full restaurant in stark contrast to the empty Ece Marina restaurant next door. I was unsure whether to report what Banu was telling me but a) this is quite typical of business in Turkey and b) yotties need to know about this ridiculous situation in order to make their own mind up about where they stay in Fethiye. For us this just makes us want to stay at Yacht Plaza even more! Here follows a break down of the services on offer to yotties at Yacht Plaza Hotel: 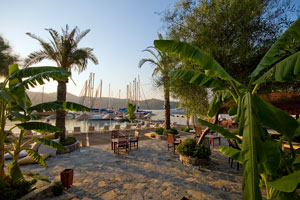 For us it’s a winning combination and with the offer of 300 lira per month for off-peak mooring it’s an attractive place to hang out. It helps that the business is run by a lively, intelligent brother-and-sister act who understand business and customer needs. Take as an example a recent incident in which we found ourselves, requiring an emergency berth and car hire at short notice. This was dealt with swiftly and professionally by both Banu and Batu. We were impressed with their efficiency but when you meet Banu you have a sense that she understands her customers.

A minor issue is that there are still some inconsistencies in the pricing structure of various services, but then a winter in Marmaris Yacht Marina will get the cruiser used to the “we’ll just make it up as we go along” pricing regime! This should not, however, detract from the fact Yacht Plaza Hotel is a reasonably priced location to berth your boat. 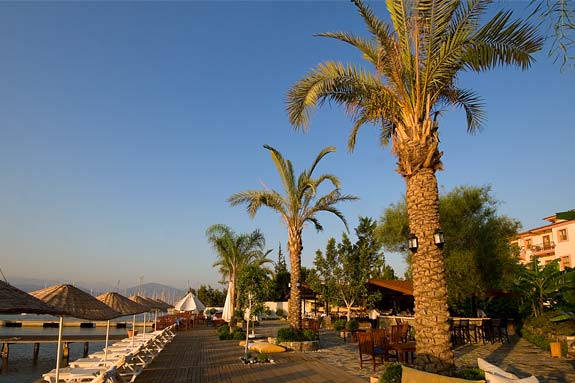 Looking east towards the restaurant and bar

Perhaps Banu should consider offering happy hour beer prices to compete with Ece Saray Marina’s happy hour next door. This makes good business sense: a beer sold at 3 lira is more profitable than no beer sold at all, and with word-of-mouth being the best form of advertising, especially amongst sailors, this could take business away from the marina and place it squarely on Banu’s doorstep. I have yet to suggest this to her.

“I want to maintain the family atmosphere here. Over time we get to know our guests to the point that they become family. Sometimes it’s hard to tell who works here and who is a guest – that’s how close we all become.”