The day started off with torrential rain, thunder and wind. The kind of weather that dictates a trip to the pub, which we duly undertook. Maybe this wasn’t such a good idea considering what followed… 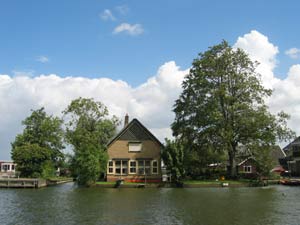 After leaving our yachthaven in Aalsmeer, not forgetting to give the middle finger to the hairy, cigar-chomping Dutch twat who told the skipper off for borrowing a hose (that wasn’t even his), we headed towards Amsterdam. Of course this involved negotiating a number of bridges which meant either approaching very slowly and hovering backwards and forwards until the bridge opened, or, more sensibly, tying up to the posts provided on the side of the canal.

As we approached the bridge the wind picked up. All of a sudden the boat swung round, putting it beam on to the entrance of the bridge. Immediately both the bow and the stern kissed each side of the entrance. The strongest of the older crew members (let’s call him Mark) and I scrabbled to push the bow out of the way and fortunately the boat swung round. We weren’t out of trouble, however, as a selfish twat in a motor launch was pointing straight at us (he didn’t have to wait for the bridge to open as he was low). Instead of waiting for us – we were obviously under manoeuvre – he continued at us like a torpedo. To avoid him the boat was manoeuvred backwards and the backstay started disappearing under the bridge. On top of this the wind picked up some more and the boat continued to be pushed under the bridge. The only option was to slam the boat forward and sod the launch, which by this time was passing us anyway. 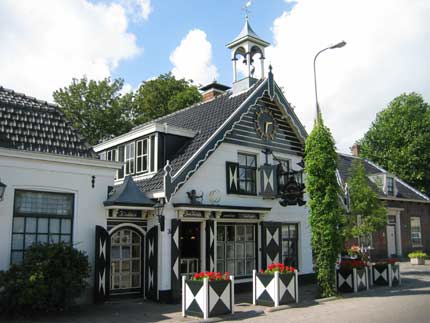 Somewhere on the way to Amsterdam

That wasn’t the end of it however. Realising the bridge wasn’t going to open just yet, we decided to moor up using the mooring posts provided. Sounded simple but after lassoing the bow the wind decided to pick up again and we pivoted around. Because dick-head here (me) had decided to bowline the line I couldn’t slip it, so instead I had to pull it all back in. Only problem was the line had caught round the post so now the boat was lying across the canal, attached to a long line that stretched across the entire width of the canal, with the wind blowing us round backwards. To make matters worse a 50 ton yellow barge with dredging diggers and sh!t on it (making it look even more scary) was coming at us at speed and obviously couldn’t avoid us because we were occupying the entire width of the canal. The only thing to do was to lose the line over the side, but because I’d bowlined it to the cleat I couldn’t break the knot. If all this is rather confusing to follow, imagine how it felt for us at the time! Meanwhile the yellow monster was coming at us, with the driver screaming and shouting at the top of his voice. At this point the bridge was beginning to open so things started to get frantic. A little forward throttle gave some slack on the line and I was able to untie the knot, but the line was still stuck on the mooring post so we had no option but to drop it over the side. In a canal that sees many prop-driven vehicles passing every day this was utterly irresponsible and dangerous. But what’s more dangerous is a 50ton yellow dredger ploughing its way into the side of a fibreglass yacht, so in this instance it was the only option.

The whole thing was observed by a parked-up launch who went ballistic at what he’d seen, whilst yellow-dredger driver was dancing and waving his arms about, screaming blue murder at us at the top of his voice. We made a quick exit but had to contend with the dredger following us down the canal for the next kilometre.

If you thought that was all that could happen in a day then you are mistaken! After passing another small bridge on the outskirts of Amsterdam we slowly made our way up to Schiphol motorway bridge which only opens a few times a day. This meant mooring up again. After choosing a place right by the bridge next to a local sailor and his family we were shouted at by an angry Dutch man who evidently worked on the bridge, so we opted for some more mooring posts. We lassoed both the bow and the stern but the wind picked up again! The boat swung round and pushed us into the side of the canal under a large canopy of aspen. Shrouds twanged, the mast shuddered and we shat ourselves as the rigging felled away half a tree. We were showered with leaves, twigs and then branches as the skipper bravely motored us out of trouble, leaving the deck looking like a lumberjack’s nightmare.

We moored up by another big bridge and waited with fourteen other boats for it to open at 11.45pm. Then, in a big flotilla, we worked our way through lots of bridges right into the heart of Amsterdam. If you’ve never done this before then you must. Cruising through the Amsterdam canals at night is a most magical experience, despite not seeing any goblins in windows.

We rafted up in a very busy yachthaven at gone two in the morning, waking up a Viking woman as we jumped across her metal bows.