The Marmaris Bay Cruisers Net is a daily broadcast on VHF channel 69, allowing all yotties the chance to exchange advice and information. It’s a bit like the Archers or Dynasty, without the theme music. One day in November a depressed-sounding bloke came on asking for help with his computer. I responded but never heard anything back. Perhaps he’d found a pack of razor blades or something.

A few nights later I met a long-haired chap with a Devonshire burr propping up the bar, looking like he was carrying the weight of the world on his shoulders. We got into a deep conversation about life, the universe and computers. It turned out that Sam, of s/y ‘Cindik’ (pronounced ‘gin-dook’), was the man looking for IT assistance and he invited me on his boat for coffee the next morning.

I found Cindik, with her brightly painted yellow steel-hull, propped up in the far recesses of the boat yard. Stepping upon the cork-covered deck Sam explained how everything on his boat was made from recycled materials, and that he and his wife had built everything but the hull. The mast, the decking, the rigging, blocks, self-steering….you name it, he made it. I lowered myself down the companion-way and eased myself into what could only be described as a log cabin. Every bit of the boat was covered in reclaimed wood and other materials. The shelves came from his home in Devon and the stove had been chucked out as trash. The centre-piece, however, was the compression post (the post that follows the mast down into the boat). It was a piece of English oak that was to be used for a wooden boat reconstruction project that had fallen on hard times. Sam rescued this great big lump of wood, floated it ten miles down the River Tamar, whereupon it was hand-carved by one of his friends and installed on Cindik. 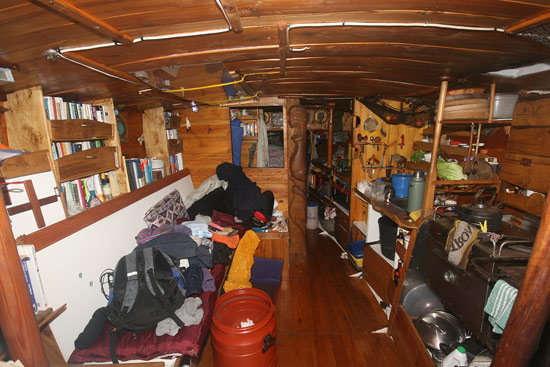 Inside Cindik, with hand-carved compression post centre of picture

We got chatting whilst I fiddled with his computer and I learned that Sam’s father, Pete, was the original skipper of the Rainbow Warrior. The CEO of Do-Gooders plc. I could see that the laptop was trashed but I didn’t say anything as I wanted to learn more about Sam and his boat. He explained that he was on a long voyage, from the UK to the Indian Ocean, on a peaceful protest against the way in which the Chagossians have been treated by the UK government.

Excuse me? The Chag-who? What on earth was he talking about?