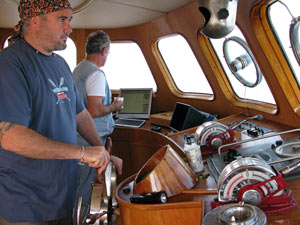 Me at the helm (pic by Liz)

Tired. Very tired. Patience wearing a bit thin. We were invited on this trip as a little jolly, with the odd watch being required and Liz to heat up the occasional meal. Turns out a few of us are incapable of making a cup of tea or turning the oven on without either being shown or asked three times. The deckhand appears to have no concept of ‘do the job when told’ or ‘keep the helmsman and skipper happy with cups of tea’ or ‘don’t answer back with an excuse when asked to do something’ etc etc. The owner owns the boat so that’s cool, she’s free to sit and read or be sea-sick. The agent appears to have discovered the gin bottle. The rest of us continue to work our balls off either in the galley, the engine room or behind the wheel. 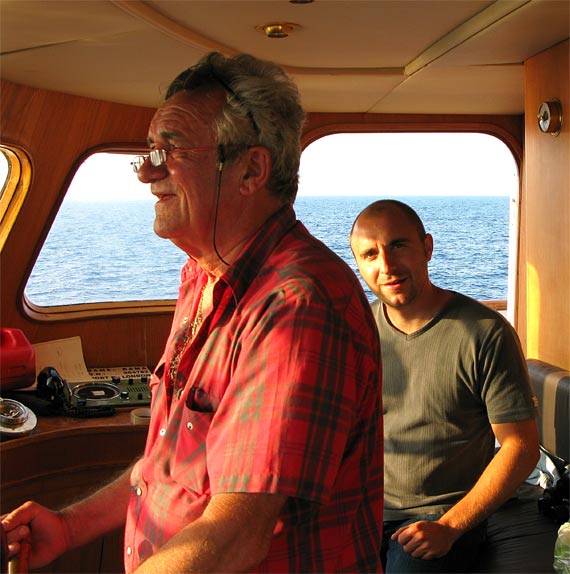 "Er, skipper, isn't it your turn to clean the heads?", questions the deckhand.

The tables turned a little, however, when the back-end of the front we were avoiding stirred up the waters and caused a little chop. Stanley’s classic ‘wow, big waves’ comment won’t be forgotten in a hurry. He was commenting on 1m swells, bless him. It was fun for a while. We stood at the bow of the boat and rode Rama like a fairground ride, and lounged around either watching Only Fools and Horses or dozing. The sea-state, however, was being a little more restless as the wind picked up and it shifted until we ended up with a good Force 6, on the nose. 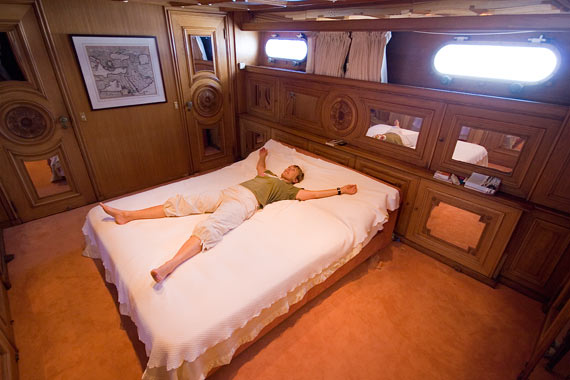 Liz relaxing in our cabin. Photograph not possible in a F6 with no stabilisers

Now, let me explain. An F6 on the nose isn’t so bad on a sailing boat. It’s not ideal but hopefully you’ve stowed and have reefed and all is good. What happens, however, when the coffee machine, that sits on top of the fridge, that sits on top of the dishwasher, doesn’t get stowed? Gravity and general corkscrewing effects tend to want to move unsecured items from their original location to a new one, normally a few feet away. At great speed. Noisily. And who on earth thought the 42inch LCD tv would stay put? Funnily enough it was being watched at the time when it decided it had had enough of its vertical position. Doors banged. Glasses smashed. Food and drink were herded across the pantry. People got sick. And so on.