Next time you turn on the tap for a glass of water or you have a shower, remember how easy it was to perform that simple, everyday act. In our latest episode we explain why it can take us over two hours to do the same…

Having delayed our check-in to Thailand for far too long, it was time to get to Ao Chalong, the main commercial bay of Phuket Island.

It’s normal for us to wake at dawn, but Millie is usually the first on deck, often because she’s been keeping watch throughout the night. Today the horizon was filled with another spectacular sunrise–a bit like dolphins, you never get tired of them. 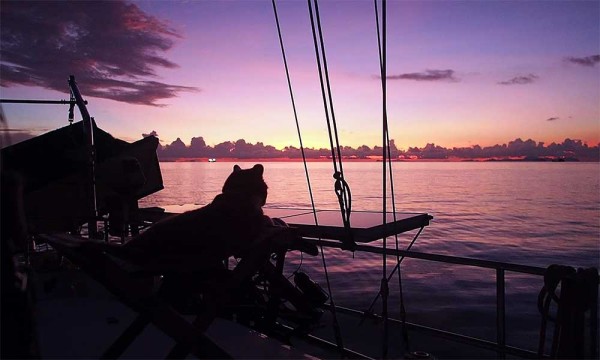 After breakfast we took a last look at the view, weighed anchor and motored off in clear skies with little wind. As we picked up speed a few startled tiddlers jumped out of the water and landed on the swim platform, so Liz put them in a bucket for Millie to hone her fishing skills.

We were soon entering Ao Chalong, a huge, protected anchorage on the southeast corner of Phuket island. As it was packed with every kind of boat, we played it safe and stayed away from the crowded mooring buoys. This meant a long dinghy ride to shore, and timing our landings carefully to avoid the very low tides.

Checking in is easy in Ao Chalong, with harbour master, customs and immigration in three rooms next to each other. The whole efficient process took 15 minutes (this was after registering on their computer system first). No-one seemed to mind that it had taken us over two weeks to get from Malaysia to Thailand–a journey that should only take a couple of days–so all the doom-laden warnings we had been given by the bar-fly sailing fraternity evaporated in the friendly offices.

Like many sailors before us, we discovered the Phuket Cruising Yacht Club, a warm, rustic spot run by Captain Brent McInnes. It soon became a regular stopover whenever we went ashore.

Catch all this and more in the video clip at the top of the page (if you don’t see the clip you can catch it here on youtube).