India’s most romantic city? If you enjoy having the hackneyed Hollywood idea of romance shoved down your throat by every guide book, then yeah, I s’pose it’s romantic.

We arrived there for our three day, two night stay on 14th February.

At night, with the soft orange lights from the surrounding buildings bouncing off the water, it is like something out of A Thousand and One Arabian nights.

It’s certainly pretty: a wide stretch of shallow water (the lake) is surrounded by limestone and marble hotels and a Monte Carlo-esque palace. Decorative islands float in the middle. At night, with the soft orange lights from the surrounding buildings bouncing off the water, it is like something out of A Thousand and One Arabian nights.

If comparisons with Italy must be made then it’s more like Lake Garda than the Lido. Of course, it’s impossible to get away from the James Bond island hysteria that surrounds the Taj Lake Palace Hotel (Jag Niwas island) on every page of every guide to Udaipur (it is where they filmed some of the scenes in Octopussy). It’s also where the nouveaux stay. And at £430 a night for the cheapest room (breakfast not included) or £6,200 for the Presidential suite, they’d better be riche as well. We decided not to stay there.

My choice of accommodation for Udaipur turned out to be a winner which I can happily recommend. We enjoyed an enviable 360° view across the city from the rooftop of the sixteenth century Anjani Hotel.

View from hotel roof looking west across the lake 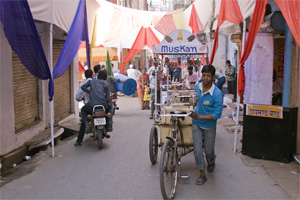 On the first day we were a little disheartened by the streets and lanes packed with touts and shops around the lake and palace. We felt like aliens in this wholly touristy area. Nevertheless, we shelved our reservations and joined the throng. Shunning the ‘antiques’, carpets, and tailoring being thrust at us, we enjoyed a leisurely walk around the main area and across a scenic bridge over Lake Pichola.

Crouching on the bridge

Tourist shot on the bridge

Ending up at the end of a track by the water, right opposite the City Palace, we watched the sun go down over Udaipur from the best viewpoint in town, in the company of professional photographers and the homeless.

Below is a slideshow of some of those pictures taken, plus a few others, given some hand-held HDR treatment. Click on it to begin (you may view in full-screen mode too). 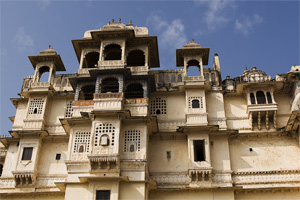 The next day we joined the queues at the fairytale City Palace. With its balconies, cupolas, ornate towers, palaces within palaces, opulent state rooms and extravagant private rooms (check out one of my favourites, the nursery), it is a fabulous museum of wealth and privilege. The corridors went on forever, and I wasn’t surprised to discover that it is Rajasthan’s largest palace. Built by Maharana Udai Singh II in 1559, it was extended over the next few hundred years. Although from different eras, the palace has retained an overall elegance and is a nice way to spend half a day.

The following slideshow gives a little taster of this magnificent palace. Click on it to start an automated slide-show.

We wanted to get out on the water, but there are very few ways of doing this. If you stay on Jag Niwas island, of course, your price includes the hotel’s own taxi service; for the rest of us transport options are limited. We bit the bullet and queued up for the Lake Boat Ride. At 300Rs (£4.20) each it is expensive by Indian standards. Excitedly we waited to be dropped off at Jag Niwas, but the boat circled the island and then carried on. Damn. It seems that you can’t visit the island because it is wholly owned by the hotel, and you can only go there if you are a guest (we know because we tried every way we could think of to blag an entry). Still, we headed over to the older Jagmandir island (right and below).

The palace here came to prominence when Maharana Karan Singh built a safe haven for the future Emperor Shah Jahan and his wife Mumtaz (of Taj Mahal fame). Although Karan’s ancestor had fled from Akbar, and his own father had been defeated in the endless battles between Mughals and Mewars, some believe Karan helped Shah Jahan (known as Khurram before he became emperor) because the Mughal’s wife was Hindu. Whatever the reason, it was a shrewd move: by keeping Khurram under Mewar protection during 1623–1624 he backed the right horse. When Khurran became ‘Emperor Shah Jahan’, he gave back six districts to the Mewar kingdom, and a nice fat ruby to Karan’s son, Jagat Singh. We didn’t get quite such a good deal. We were allowed to see about one third of the palace buildings, and a cup of tea cost 130Rs (£1.85). To put it into perspective, a cuppa in the station cost 2Rs.

Feeling disappointed with our boat trip, despite the prettiness of the palace, we decided to get off the beaten track, so out came the walking boots. This proved to be a wise decision. We found life-as-it-is-in-India going on in the shops, houses and workshops outside the expensive tourist area. What a breath of fresh air to find women doing all the work, as men sat around drinking tea in the back alleys and children pumped water from standpipes.

We walked northwards, towards the distant music we had heard all morning, which became louder until it nearly split our ear-drums. Distorted noise poured out of strategically placed giant speakers along narrow alleys: just as the pain began to subside you would be hit by a fresh onslaught of decibels at every turn. We had stumbled upon a Muslim festival, it was the Prophet Muhammad (peace be upon him)’s birthday celebrations. Great vats and plates of food were being prepared for the afternoon’s revelry by men (yes, men for a change!) while the women stayed in the background looking after excitable children. Jamie and I were offered a kind of semolina to eat. It had raisins in it and was rather sweet, but very good. Presented on a small paper plate, the trick was to eat it with your (right) hand and then throw the empty plate on the ground. I found the throwing of the paper plate on the ground more uncomfortable than eating semolina with my hand.

I was treated with respect and kindness by everyone.

As usual, I was glad that I had kept a scarf with me and was reasonably covered up with a long top and trousers: I was treated with respect and kindness by everyone.

Before we left Udaipur we were lucky enough to come across one of the best places we have eaten in India. The city has loads of hotels and restaurants, and many are recommended in the guide books and online (not always accurately). We struck out on our own and ended up at the Nayee Haveli. What a serendipitous discovery. The rooms — there are only six of them — are comfortable and full of character; and the three roof terraces have million dollar views. It’s the sort of place you can spend the day just relaxing and hanging out.  Our lunch, served in the Moonlight Tandoori Restaurant on the roof, was exceptional. Cooked by Raju, who had been working in the hotel for three years, we ate the best vegetable jalfrezi of our lives. Admittedly it took a little while, but the whole meal, including chutneys, was made freshly for us.

If you want a really sour, hot and tasty chutney just mash together all of these: mint, garlic, ginger, coriander, lemon, fresh green mangoes, salt, pepper, cinnamon, all spice and an oil of your coice. Make sure all the ingredients are fresh and don’t overdo the cinnamon.

Below is the complete Udaipur photo set as a slideshow. Click on it to begin.

And so ends our trip to Rajasthan.