[one_half last=”no”] [accordian] [toggle title=”Columnist and contributor: Wanderlust Magazine” open=”yes”]In 2011 I began contributing articles to Wanderlust Magazine’s website. More recently I have become a guest columnist in the printed magazine. Filled with information about all the destinations you could ever want to discover, Wanderlust’s website has an excellent readers’ page for aspiring writers to showcase their work. If you share travel writing ambitions, have a look at my 10 tips on how to get published in Wanderlust (or any travel magazine, newspaper or website).[/toggle] [toggle title=”Contributor: Sailing Today”]In 2010, after completing the Vasco da Gama rally from Turkey to India, I pitched an article to Sailing Today about our six month passage. The editor, Jake Frith, was interested in my idea, but could I guarantee good quality images along with engaging text? I knew Jamie’s photos would pass muster, but since this was my first professional writing assignment wondered if my writing would be good enough. In the end we sold a series of six articles to the magazine. [/toggle] [toggle title=”Editor: Itinerant Writers Club”]After a visit with Jamie’s aunt to her creative fiction writing class in the UK, I searched for a web-based writing group for writers with no fixed abode, like me. All I unearthed were expensive writing courses and wild promises of making money through travel writing (we all know that’s a lie!). So I started my own travel workshop, and the Itinerant Writers Club was launched in 2011. The club continues to grow in size, producing some award-winning writing along the way. Six members feature in the Writers Abroad anthology, Foreign Encounters. [/toggle] [toggle title=”Writing Competitions”]When I started writing I had no yardstick by which to measure the quality of my work, so I entered travel writing competitions. After a couple of unsuccessful attempts with the Daily Telegraph, I de-constructed the winning pieces, tried again and was rewarded with a win in 2010. I have gone on to win in 2011 and 2012. The annual Bradt/Independent travel writing competition is always heavily subscribed and produces engaging tales; in 2010 I entered a piece called ‘Searching for Mermaids‘. To my astonishment I reached the final. I didn’t win, but one of the judges told me that my piece was the best, which was almost like winning. I have been lucky enough to win or be short-listed in several competitions apart from those above: the Mail, Walkopedia, Mountain Council of Scotland, Sheldrake Publishing and more.

Testing your writing mettle is a fun way to improve writing skills. If you win, you know you are on the right track; if you lose, look at the winning pieces and learn from them. But make sure you only enter legitimate contests, usually those which don’t require an entry fee.[/toggle] [/accordian] [/one_half] [one_half last=”yes”] [person name=”Liz Cleere” picture=”http://followtheboat.com/wp-content/uploads/2013/06/liz-helm-langkawi.jpg” title=”Travel Writer” facebook=”https://www.facebook.com/lizcleerewriter” twitter=”https://twitter.com/lizcleere” linkedin=”uk.linkedin.com/pub/liz-cleere/21/b80/a69/”] [/person] [/one_half] [separator top=”30″ style=”none”]

Liz has been writing and blogging about travel since she and Jamie slipped the lines of s/y Esper in Turkey and sailed to India. Her work has been published on-line and in print.

[one_half last=”no”]After winning my first writing competition for the Daily Telegraph, I was lucky enough to win several other prestigious travel writing prizes. In 2010, I became a contributor to the UK magazine, Sailing Today. I also write for Oystermarine’s glossy journal, Oyster News.

I became a contributor to Wanderlust Magazine’s website in 2012, and in 2013 began a guest column in the printed magazine. In 2011, I founded the Itinerant Writers Club, a web-based writing group for travellers around the world to hone their travel writing.

My greatest travel influences are my parents: Dad instilled a love of antiquities and Mum a passion for nature. But it is the people I have encountered along the way who have formed my most cherished travel memories.[/one_half] [one_half last=”yes”] 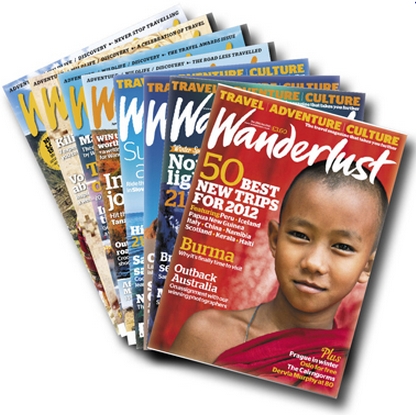 What are you up to at sundown We're sipping a cool