This quick story is less of an exciting yarn about sailing and more about the relationship between yotties.

Whilst sailing to Goçek in light winds which subsided to a whisper, we went to turn the engine on to find nothing happening. With the very light winds edging us towards land and not enough wind to gain any steerage it was time to panic. Panic because I really didn’t know what I was doing in the engine room. The engine won’t start. Right, where do I begin? Haven’t a clue. Get a book out on diesel engines. Can’t find any of the problems identified in the troubleshooting section. Must be the carburettor. No wait, it doesn’t have acarburetor . And so on. Fortunately we knew we were surrounded by fellow liveaboards and so we called Gina of ‘Impulse’ who just so happened to be finishing a shopping trip in Goçek and was able to come over to help. On top of that she had on board three mechanics!

John of ‘Odin’ and Johnny of ‘Chagazee’ were present, as was Mick, Johnny’s son. John and Mick hopped on board Esper and within the space of ten minutes were able to get the engine going again and get us back to the safety of Boynuz Buku. It wasn’t until we got back there that Terry from ‘Reality’ was able to identify the problem as a duff starter relay switch and, under his instruction, I was able to repair said switch. 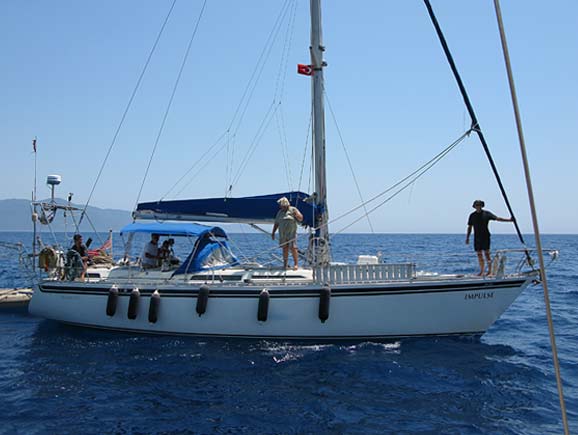 Gina, centre, with John of 'Odin' at the bow and Johnny of 'Chagazee' at the helm.

We’ve gone on about it before and I’ll repeat it again: I’m always amazed at the camaraderie amongst sailors and their willingness to help out in a moment of crisis. It warms me ‘eart, so it does!

We should also thank all the people involved in the Missing Millie crisis. Again Gina offered her support, as did Terry and Fiona of ‘Roam II’. It didn’t stop there though. After telling Karen of ‘Antigua Lady’ about our missing cat she had an army of yotties all over the peninsular on stand-by, ready with boats, cars, scooters to assist! Colin and Trish of ‘Moody Time’ were anchored 90 miles away from Bodrum but were prepared to sail there in order to pick Millie up. Of course Antonella and Vincent should be name-checked for helping out, as should Arzu of ‘Dofi’ who found Millie in the first place. Let’s not forget the extended family who live and work on Tersane Island too, and Incila from E.G.G. Yachting (who also once had a cat go missing. She went overboard in a storm and was found a week later wandering the shore!). We had texts, calls and emails from loads of people wanting to keep abreast of Millie’s welfare. Some of these people we may never see again, some we’ll bump into tomorrow. How nice that people care.