The Dharavi slums. Wow. What an emotional whirlwind that trip was. So enamoured  was I, I went twice!

First let’s get a few things straight. For starters it’s a bit of an insult calling Dharavi a ‘slum’. Yes, the streets are squalid and dirty but the people who live there do so in clean homes, have electricity and water and many make their living there. Believe it or not some have blue-collar jobs and commute in to town, earning enough money to leave their poor upbringing. Yet they return to what is now becoming ‘prime real estate’. Perhaps because of the close proximity of the homes the social network there was really tight. Everyone seemed to know everyone else. There was definitely a sense of security there.

Almost every building accommodated some kind of industry, from ladies crushing chilis with clattering, mechanical machinery to doctors surgeries ironically operating from the floor above the chicken slaughter house. The photographs show Dharavi to be an industrious and friendly place with a sense of order and pride, so any reference to ‘slumdog‘ or ‘slumkutta‘ has been avoided.

So what about thrusting a camera into the faces of the poor locals? Some argue it’s rather voyeuristic, nay, rude to be prying into the lives of those less fortunate. Indeed one tour operator who run trips to Dharavi prevents tourists from taking pictures. This is ridiculous.  Almost every person we saw loved having their photograph taken, except the old lady who shouted at me for taking a snap of her poppadoms drying in the sun. Don’t worry, I still got the shot! Generally the locals welcomed us into their homes, guided us through the tight back streets and hung out with us as we sauntered around their neighbourhood. We were only ever treated as guests, never as foreigners. 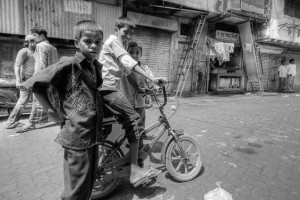 The most touching moment for me, and I will treasure this memory for as long as I shall live, was stumbling upon an open-air disco for the kids. Tucked into a tiny, dusty corner of a back yard, grooving to some rather excellent, banging Indian house music, was a group of bouncing kids who went absolutely mental when Astrid of ‘Stormdodger’, Trish of ‘Dragon Song’ and I joined them for a dance. Yep, the old robotics routine again! One father was so pleased at the entertainment he tapped me on the shoulder and offered me a well-received can of ice-cold Sprite (I was gasping, trying to keep up with these kids in the searing heat!). It doesn’t sound like much but I will never forget the warmth on that father’s face. We made their day, and they ours.

For me photography is often about engaging with people. Despite being instructed to do so by our taxi driver I point-blank refused to stick my camera out the window of the car as we slowly drove down one really poor street. That is voyeuristic. So on my second visit to the same street, this time on foot, we made the effort to talk to the people I was snapping and everyone we met appeared so happy. Except one family. You’ll spot in amongst all the photographs of smiling faces two brothers who look very sad. Why were they like this? It doesn’t bear thinking about but their eyes tell a different story and their portraits stick out like sore thumbs. It’s a stark reminder that behind all the laughter life is tough.

So let us take you on a guided tour of Dharavi. Click on the first thumbnail below and use the << and >> links to scroll through the images. Click on any image to exit the slide-show. Each image is around 100kb so allow a few seconds to load each one if on a slow connection. We’d like to know which your favourite shot is so please let us know in the comments, below.

The Dharavi Slums of Mumbai: A Guided Tour

The Best of the Rest

10 Comments on “The Dharavi ‘Slums’ Of Mumbai In Photographs”

The Dharavi Slums of Mumbai In Photographs | followtheboat
7ads6x98y
We make weekly videos!