Knowing we didn’t have to leave until the afternoon we spent the first part of the day climbing hills and taking in vistas. Ethan once again attempted to catch fish, bless him. He’d picked up a couple of tips off a local whilst in Datca and was trying out his new-found technique. It didn’t work but I’m not going to take the piss because I haven’t succeeded myself yet.

Whilst at the top of one of the hills, looking out north towards Bodrum, we could see the sea state was looking a little messy. I knew we were going to be in for a bit of a rough ride, sailing close-hauled back to the marina, but I had to get these boys back in time for their flight. 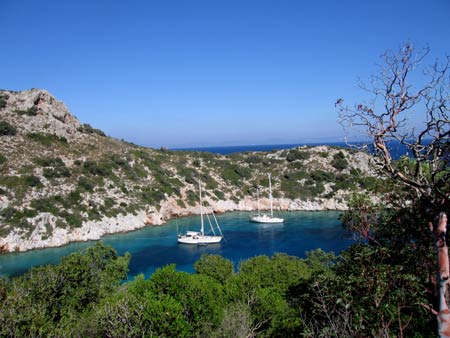 Perhaps the best anchorage this year

See what I mean?

We upped anchor, motored out the calm little bay and turned the corner into some pretty impressive seas! The wind, which was easily gusting mid 20s had whipped up the sea into a confused mess. Around the mountains the sea wasn’t really going in any particular direction and I did wonder whether trying to sail back to Bodrum across the open gulf was such a good idea. I insisted on lifejackets and we put a couple of reefs in both the main and jib. Even so the log was suggesting a boat speed of 7 knots, whilst the GPS claimed it was far higher (and with little tide I’d say the GPS was probably closer to the true boat speed). Once we had got away from the mountain range the sea became more predictable but higher! Also the wind speed picked up too and we recorded gusts of high thirty knots apparent, all of which contributed to the most fantastic sail of the summer! We were flying, getting soaked by the odd rogue wave or getting sprayed as we dropped down off the top of a high wave but Esper was loving it, and so were we! Occasionally the log suggested 8 knots, which isn’t bad for a 15 year old boat sailing close hauled. Ethan spent most of the journey standing on the aft deck to windward as if surfing the sea on a huge surfboard, whilst Chris and I took it in turns to steer.

What I love about sailing is being able to do what we’ve been doing… and just keep doing it! That was the magic of today’s sail: we set sail in perfect conditions and just kept going. The result was the biggest smile that lasted for hours. That’s why we sail! 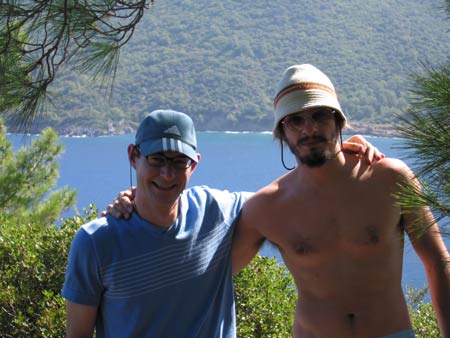 Chris and Ethan, delivered safely back to America!