Having gone in on a car share with Taz for a few days, we spent the Monday driving the east and south coast of the island. First stop was Vittoriosa, a splendid Venitian-looking city, much of it built in the early 16th century.

We then aimed for the south east coast and headed towards Marsaxlokk, a picture-postcard harbour town populated by the familiar looking painted fishing boats. I think if we’d had more time I’d have returned to this town as it is extremely photogenic. I did get some odd photos though – old broads chatting over a broom stick, a leathery-faced local and some dude hiding behind a blind.

The first treat of the day, however, was visiting the oldest free-standing structures in the world: Hagar Qim and Mnajdra. Although the artefacts from these sites now sit in the Museum of Archaeology in Valletta, one can’t help but marvel at the fact that their age puts Stonehenge in the Legoland period.

The second treat of the day was the ancient walled town of funky cold Mdina. This little gem dates back to around 1000 BC. It’s also known as the Silent City and the guidebooks suggest checking the place out in the evening once the tourists have gone, but we didn’t have that luxury. One luxury we did have, however, was to dine in the courtyard of Il Gattopardo before checking out the other luxury of St Paul’s Cathedral. Despite my blatant atheism I do love a good cathedral and this does not fail to impress. Whilst one spends many a moment wandering around, mouth open agog at the many splendors that adorn the walls and ceilings, for me the highlight were the marble tombs in the floor.

Above: Marble tombs of Medina 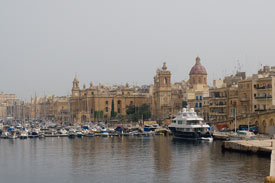 The old and the new, Vittoriosa

3 Comments on “Taking in Malta & A Lot Of Photographs”

Taking in Malta & A Lot Of Photographs | followtheboat
7ads6x98y
We make weekly videos!