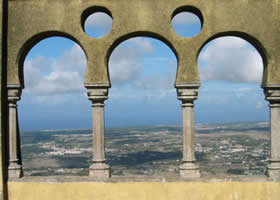 Autumn time: my favourite season. And as my tan fades with every shower so the dry heat of the south is replaced by a slight bite in the air as I make my way back up through southern Portugal to Sintra. If Evora is Chitty Chitty Bang Bang then Sintra must surely be all the Hans Christian Andersen tales in one place. With biscuit tin views and candy buildings the comparison with Disney World is unavoidable, but it is perhaps one of the most beautiful places I have been to in Europe. Sintra climbs the highest mountain just outside Lisbon and each building is unique. Although Sintra is placed firmly on the tourist map it still retains its magic, simply by being opulent and outrageous. Like the hotel from The Shinning the youth hostel sits on top of the mountain guarded by some mean looking dogs, which is fine if you want to visit the Pena Palace, but a bit of a hike for anything else since all the attractions are at the bottom of the steep descent. Still, I needed the exercise. Pena Palace is a confectionary castle made of ginger bread and sugar icing and is one of the most ballsy buildings I’ve ever laid eyes on.

It blends gothic, renaissance, rococo and stucco designs in such a way that you’re compelled to take pictures at every step.

Whilst standing on a balcony in the palace, gazing across the view towards the Atlantic, I heard footsteps running towards me. Thinking I was about to be mugged by a dog I whipped round to find Shintaro standing there with a huge grin on his face, chanting “ah-so” repeatedly. We wandered the gardens whose flora utilises the near-tropical environment this area offers and then took on the Moorish castle beneath the palace, which offered some fantastic views of the surrounding region.

My stay in Sintra, however, was topped by a visit to the enchanting Quinta de Regaleira. Although the house was interesting it was the garden that could not fail to impress. Set in large tiers this steep tangle of orchids and large trees was littered with castle turrets and water features, but it was the Initiation Well that really blew me away. The well was over 60 feet deep and wide enough to walk down. Truly this was something out of Tomb Raider as I descended down the well via a stone staircase bordered by large archways. The tiled floor at the bottom was decorated with a Moorish star (I later learned that the Regaleira is full of Christian symbolism and mystery) and offered only one way out…….a cave entrance that led into a pitch black chasm.

Because I had no guide I wasn’t sure if I was supposed to enter, but I did. The only way for me to see where I was going was to take a few steps and then stick my camera out in front of me and take a picture! By checking the image on the preview screen I could then determine whether I had to turn left or right. It was only by looking at the pictures I had taken that I could see the walls were almost organic, pulsating and breathing in the dank foreboding tunnel that led me further and further from the entrance until I was completely submerged in total darkness.

As I continued in this fashion so I turned a corner and in the distance I could see an exit. Walking towards the light I could make out what looked like a secret garden and to my surprise the tunnel had taken me to another part of the garden I had missed: a rock pool with a waterfall and stepping stones across the middle to allow me my exit! As I continued around the garden so I discovered more and more tunnels all twisting and turning under the grounds. If you visit one place in Portugal, come here! Magical! The rest of my time was occupied by more palace and garden visits, as well as bumping into Shintaro yet again, who had bought me a Japanese fan as a present. If you’re reading this Shintaro, thanks for the gift and thanks for making my last few days in Portugal very interesting and entertaining!