I suspect that the tale I am about to unfold before your eyes will be told elsewhere on this website by my Dad [previous page], with an entirely different slant to it. I should just like to say that this is what really happened: 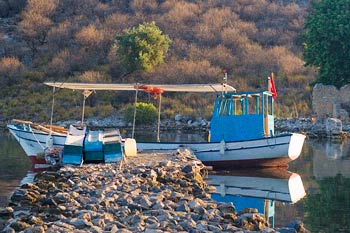 Maybe I should have hidden on this boat instead?

We were tied up to the jetty at Tersane Island with Marcus and Rachel on board for their penultimate day and last night. We were all having a great time, with that lot endlessly swimming in the clear water and mucking about on board. As usual I had a nap that lasted almost the whole day… ah, but that’s not strictly true. Earlier in the day I awoke from my normal day-long nap at around lunch time to find that we were out in the middle of Fethiye Körfezi with Esper sailing at 8 knots, heeling over at an alarming angle, accompanied by shouts of glee from Mum, Dad and Marcus (Rachel, like me, was a little less impressed with the angle). I went up on board to try and bring some sense to proceedings by sitting purposefully under the folded sprayhood, glaring at them. They just laughed and smiled.

Anyway, after surviving the madness and having spent several hours quietly tied on at Tersane I decided to check out our neighbouring boats. That night I went back to the motorboat I’d seen earlier; it was very quiet and very comfortable. So, I decided to teach my family a lesson by staying out all night and ignoring them. The following day found me still asleep on “Dofi” as she started her engine. I wondered if I should go, but the thought merely flitted across my semi conscious mind, so I stayed… I couldn’t be bothered to move…

After sleeping for a few more hours, despite the noise and the bumps, I decided it was time to get off and go home. Can you imagine my dismay when I looked up on deck to see the sea whizzing by at a million miles an hour and no sign of my lovely Esper? I began to get a little scared. I missed my Mum and Dad; still, this would teach them, wouldn’t it?

Mum and Dad were getting distraught at my absence and started taking it out on each other.

....and then they started taking it out on their guests.

....and then the guests started on each other! 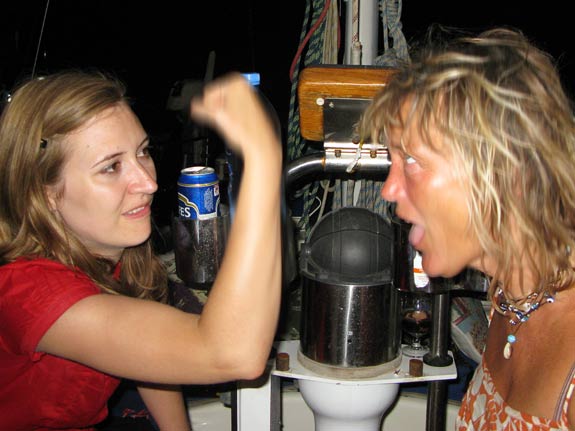 And it just went round in circles all night! They were clearly very upset at my absence. Hmmmm. Ooops.

Eventually we stopped somewhere and I heard strangers banging around and talking. I made myself very small indeed and tried to hide. I didn’t know what to do. Inevitably someone found me, a very smiley, kind lady with red hair. But I didn’t know her; I wanted my Mum. I told her in no uncertain terms to take me back to Esper and that she should not have cat-napped me. She smiled and tried to tickle me, but all I wanted was to see my Dad’s beard, not her hand. I watched her make a phone call and I thought I heard my Dad’s voice. I screamed and screamed at him to come and get me, but I didn’t think he had heard me, so I ran away and hid again. The lady gave me some food, but I didn’t eat it. I was worried about how my Mum and Dad would be coping without me. 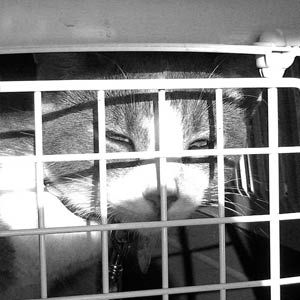 What? Did I do something wrong?

The next day I left “Dofi”, but I made it hard for them by hiding again. It took them half an hour to find me – hah! I was given to a madman on a moped who put me in a CARDBOARD BOX! How undignified. He’d put tape over the top with a few holes punched in it. All I can say is that I’m glad that we didn’t bump into anyone I knew, it would have been so humiliating. Try riding pillion in a cardboard box on a madman’s moped and see if you’d like it. After what seemed like an eternity he brought me to his house. It was then that I recognized him. It was Vincent and there waiting was his lovely lady friend, Antonella. What a relief. I told them all about what had happened to me and asked them to get my Mum and Dad to pick me up asap.

It took till the following day, but eventually they turned up. I didn’t immediately thank them for coming to get me because I had, after all, been teaching them a lesson (although I’d forgotten what it was). By the time we had driven back to Fethiye, though, I was deeply in love with them again. It was a relief to get back on Esper, my home. My lovely, lovely Esper. Now, here I am. Back on board for the past five days. We’re all very happy together again. Whatever the lesson was I think they must have learnt it. I can’t wait to go proper sailing again, it’s much better than bombing along in a noisy motorboat.

Just a quick word on the subject of motorboats. Variously known as Stink-Pots, Gas Guzzlers, Irons or the Birmingham Navy these craft tend to whiz around from A to B, generally making a noise, causing havoc and making life unpleasant for us bona fide yotties. I have discovered, through my own bitter experience, that whilst they can be spacious, comfortable, and air-conditioned they are also loud, rattly and scary. And they don’t have sails – that can’t be right, can it? I mean, why are they called motor “yachts”? They’re boats. Esper’s a yacht, Mirabella V’s a yacht, Maltese Falcon’s a yacht, Roam II’s a yacht and even Antigua Lady’s a yacht (I’m told she has been known to sail) but these white things that look like cars, have no sails and go a hundred miles an hour are not “yachts” in my sense of the word.

Should I Stay Or Should I Go? | followtheboat
7ads6x98y
We make weekly videos!