Life was good. But, as potential illegal immigrants, we needed to get out of Dodge before the law caught up with us…

After all the snags we had overcome since leaving the boatyard, it was tempting to stay in the Butangs. The water is clear, the people laid-back, the fish tasty and there are plenty of uninhabited areas and islands to play around in. But, since we’d left Malaysia almost a week ago, it was imperative that we get to Phuket to check in to Thailand.

With this bar-fly advice buzzing in our heads, we decided to enjoy the scenery and get some sailing in. If we were about to be fined we may as well have some fun first.

Sunrise over Adang on the Butang Islands

We had a few ideas about the route, and would let the wind dictate our final direction. As we upped anchor, another spectacular sunrise unravelled across the islands. We managed some sailing, but resorted to motoring when the wind inevitably died. This was the transitional period–neither NE or SW monsoon–so conditions would continue to be erratic with unpredictable winds and storms, or calm and sunny days.

In the end, we headed for the Ko Rok group, two tiny islands with a channel running between them. The archipelago of Ko Rok Nai and Ko Rok Nok is the mother of all those deserted-white-sand-palm-fringed beaches you see in travel brochures and on postcards. The place is a cliché, except that it isn’t. It’s real and golden and joyous and quiet and infused with peace. It quickly became one of our all time favourite anchorages.

But before we got to know the place we had to find a space for Esper. Distrustful of mooring buoys, and with much more confidence in our own ground tackle, we looked for somewhere suitable. The charts and our eyes showed a number of bommies and some seriously shallow depths on the east side of the channel, so we stayed central. But even that was risky as the rocky bottom is covered with coral. This meant we’d have to look for a sandy spot. After a couple of near misses, we anchored. 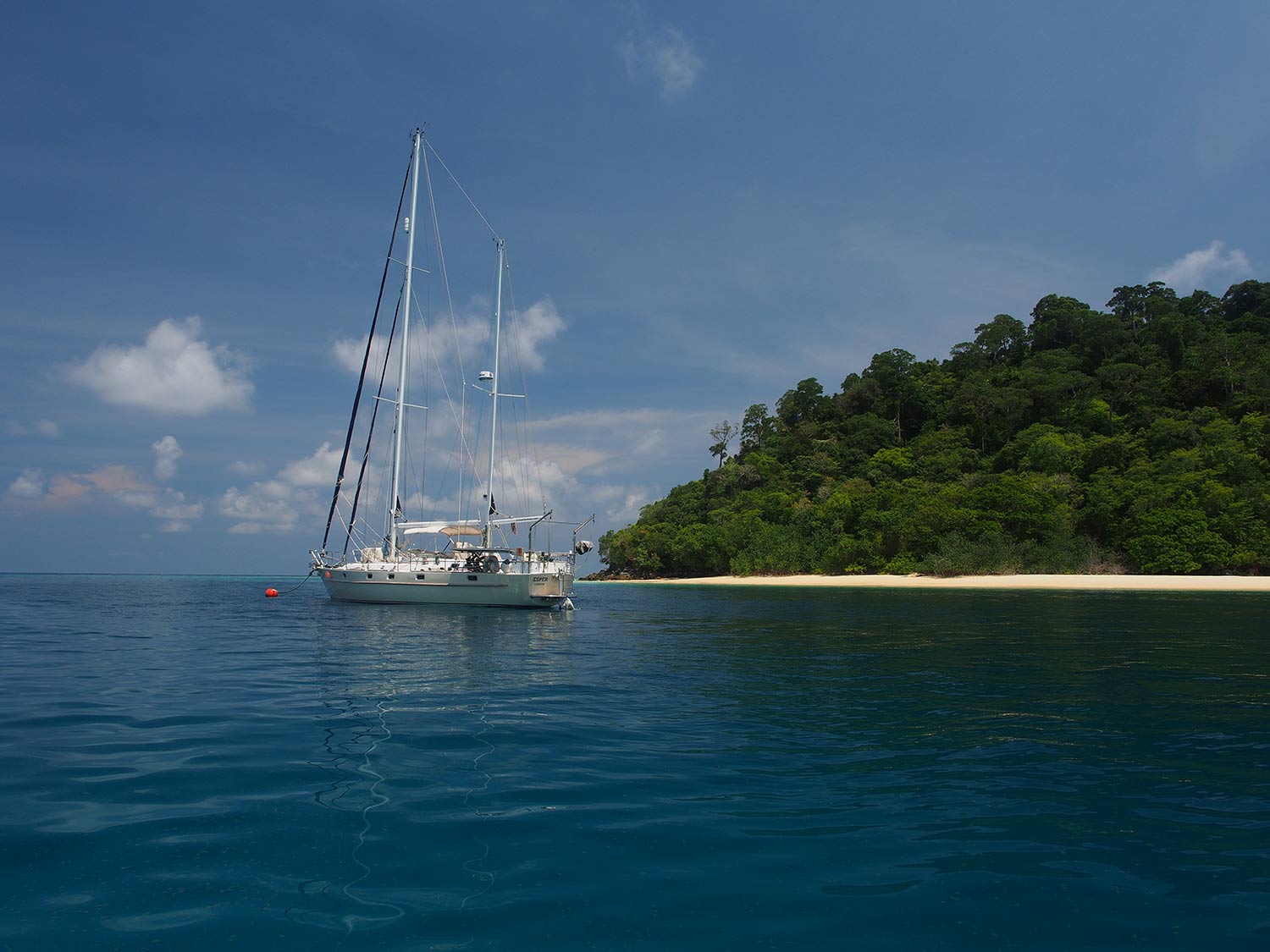 Esper on a mooring, Ko Rok

Jamie wasn’t convinced the holding was good, so dived down to check. Sure enough, his skipper’s instinct was right; we were only loosely secured on a rocky bed that would not hold Esper if any weather blew through. We agonised about taking one of the mooring buoys provided by the Thai National Marine Park authority (it was the end of the season, had they been maintained? Only last week, friends had dragged on similar buoys in the Butangs). As we were the only boat there and the lines looked in good order, we decided to chance it.

Across the channel from us, close to where we nearly hit the bottom, a sunken catamaran is marked on the charts. We headed over there in our dinghy to get a look. There’s something unsettling about viewing a wreck from the surface, it is a sickening sight for anyone who lives or works on a boat. In silence, we observed the white skeleton lying on its side through the distorted water. We left it undisturbed with the lapping waves guarding its secret story.

The other shadow which still hangs over this area is the tsunami of 2004. Most islands and towns have marked safety zones in the event of a repeat occurance, and regularly test alarms and announcements to remind locals and tourists to be alert. Like everyone, we seldom keep our eyes off the water or beach for long in this part of the world. 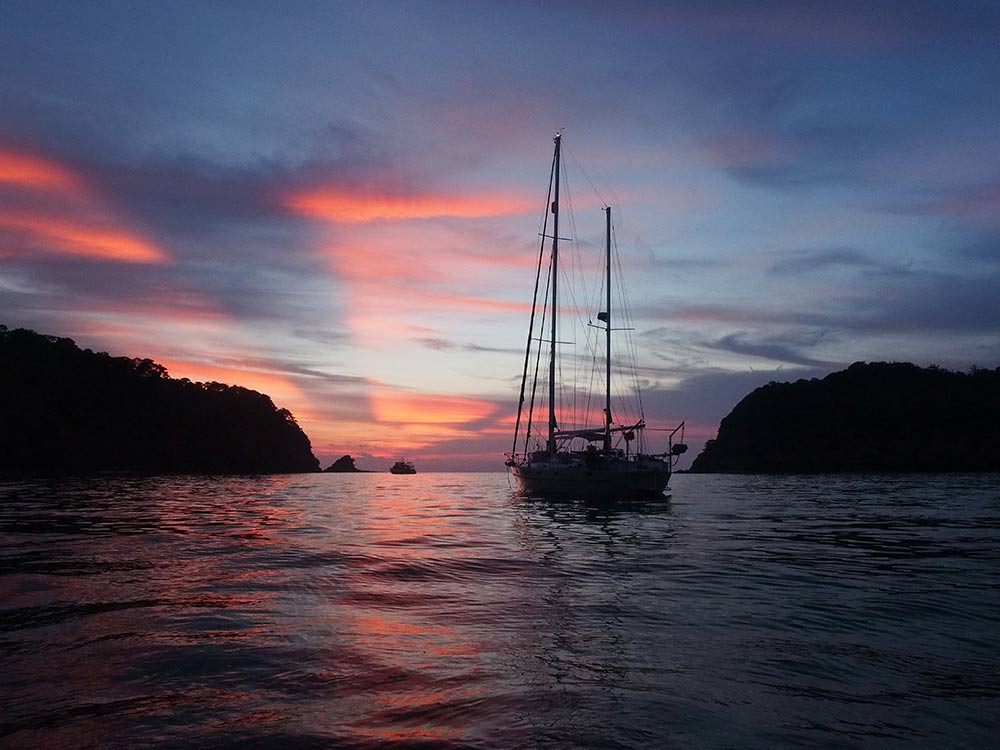 In the early mornings, and at dusk, fat bream fell on Liz’s simple bread bait which she used to good effect for catching Millie’s supper. There were always plenty to go on the barbecue too. Although fishing is prohibited in Thailand’s national parks in the off season, the rangers didn’t mind a bit of line fishing; they’re less tolerant of spear fishing, and don’t allow local fishing boats in the vicinity at all.

On the last morning we awoke to a black sky. The weather had been coming in from the west all night, flinging lightning against the horizon in every direction. But as the sun made a feeble attempt to penetrate the clouds, another storm met the one which was still coming our way, and together they hovered over the anchorage. We watched fishing boats speeding in from the horizon to raft up close to the islands. Anchors were thrown out and generators turned on. As the rain smashed the water, the little “boat islands” were obscured, apart from a few dim lights which they’d switched on, even though it was the middle of the morning.

With the rain too fierce and inescapable, we went below and waited. At least the decks were having a good wash.

Much as we liked the idea of strong winds blowing us onwards, the lightning and visibility kept us from leaving. So we sat it out, deciding to wait until the skies cleared before moving north towards our next destination, the infamous island of Phi Phi Don.

You can watch the embedded video above or catch it on youtube here.

Sailing from the Butangs to Ko Rok | followtheboat
7ads6x98y
We make weekly videos!