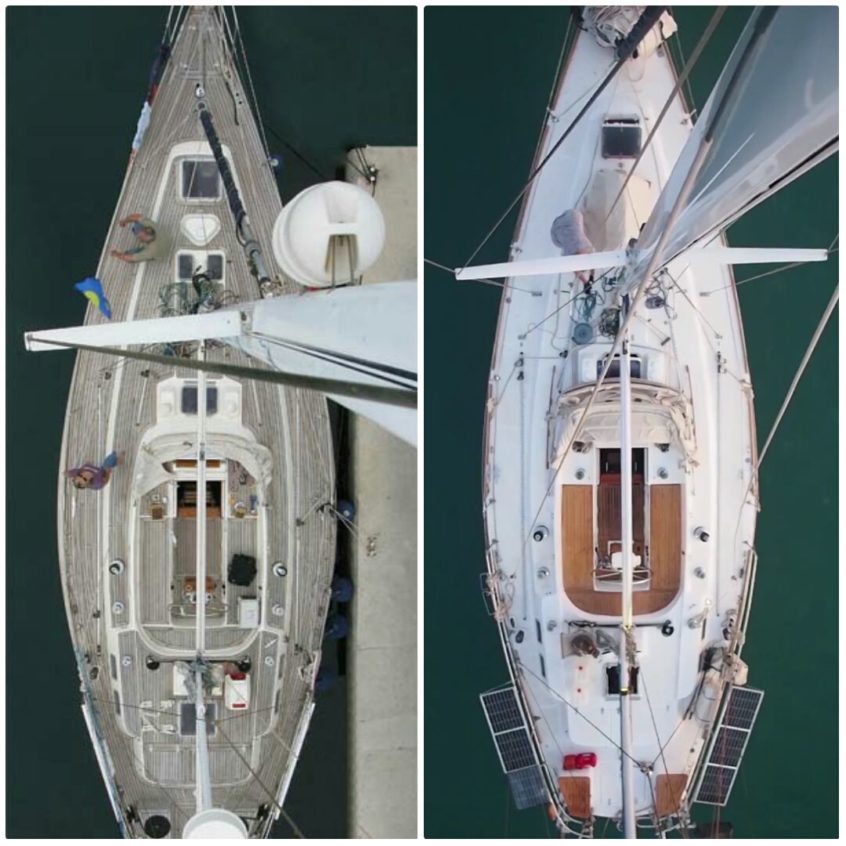 WOULD YOU REMOVE A TEAK DECK?

This is the second in our series of articles about SY Esper’s complete refit in Thailand for Sailing Today magazine.

After 25 years, even 15mm teak starts to show signs of wear. They didn’t skimp on teak back in those days, and every horizontal surface of the boat was covered in it. Beautiful. But the many leaks that had been patched over the nine years since we took possession of SY Esper needed serious attention.

Nav lights ripped off in gale

The chain-plates had been problematic from the start, most of the deck hatches, and a number of the other through-deck fittings, were not responding to being plugged any more. And all of this had been exacerbated by storms in the Maldives and a wet ride east to Malaysia in the southwest monsoon.

Thailand is the perfect place to have a teak deck fitted. The wood is easily available and at a fraction of the cost elsewhere. Skilled Thai carpenters have plenty of experience in wooden boatbuilding. Since there was still plenty of good wood on the boat –in some places it appeared almost untouched and in others it was worn thin – we wondered if re-caulking and sanding would be enough. After all, the new depth of teak would be about the same as most new builds. But the number of leaks, and a smashed section of toe rail, meant we really needed to get it all off. Removal would give us an opportunity to observe and rectify any problems that were going on underneath all that wood. So if we agreed that it must be removed, did we necessarily have to replace it?

For many yacht owners who arrive in this part of the world, swapping old teak decks for new paint is an obvious choice. There are advantages, they say. For one thing, you can walk on your deck without wearing shoes. Since temperatures seldom dip below 30°C in the tropics, wooden decks become blisteringly hot. And it’s not just on deck that the temperature soars. All that wooden cladding is great for keeping warm and snug in northern Europe, but further south it means overheated cabins, saloon and heads. 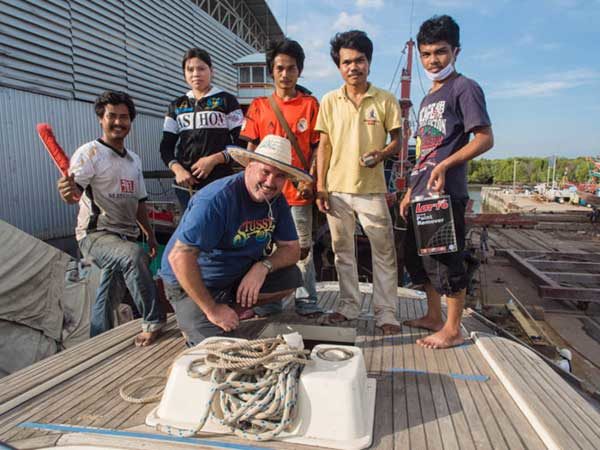 While waiting two months for a place in the boatyard, we began to question whether we were making the right decision to replace the wooden deck. No-one we met regretted getting rid of their teak, and the marinas were full of gleaming teak-less yachts. We watched owners make short work of scrubbing their decks without worrying about damaging the grain. Liz held out for replacing the teak, but was finally persuaded to make the leap when we saw yet another shining high quality 85-footer with no teak.

We toyed with the idea of synthetic teak, and found some really nice weathered and grained versions. It’s installed using adhesives (no screw holes in the deck) and looks close to the real thing. There was no-one in Thailand who could sell and install the product at the time, and as it was too expensive to risk cocking up ourselves, the only alternative was to fly the product + a specialist over from Australia to do it for us, but that would have been more expensive than a new teak deck! It would have to be paint. 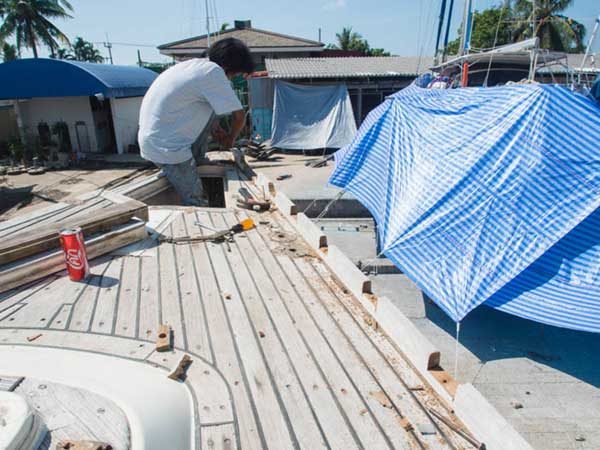 It took three weeks to remove the deck fittings, but finally Ton and Tui got to work smashing up our lovely teak and pulling out the screws like false teeth. Once the wood had gone, we were able to take a look at what lay beneath.

The old GRP was stripped, with particular attention paid to areas of obvious delamination where much of what remained peeled off quite easily. The reason for leaks down below became apparent, in particular the odd screw that had rusted or gone all the way through. Screw holes – of which there were thousands – were filled with epoxy. Further layers of pure epoxy were applied over the deck, followed by two thick sheets of biaxial fibreglass. Before any painting could be considered, the deck was built up even further with a mixture of epoxy paint and glassfibre bubbles (aka “micro balloons”) giving it the appearance of a badly iced wedding cake. Each application was sanded back by hand to a smooth surface.

With the deck stripped, we took the opportunity to make further changes.

There was some delamination which needed attention, in particular an odd gap between the rear raised area and the two lockers which adjoined it. They appeared to have been retro-fitted, and were probably what had been causing leaks around the overhead hatch in our cabin. The team dug out the crumbling fill, then applied epoxy and robust filler to ensure the drips would no longer keep us awake at night. 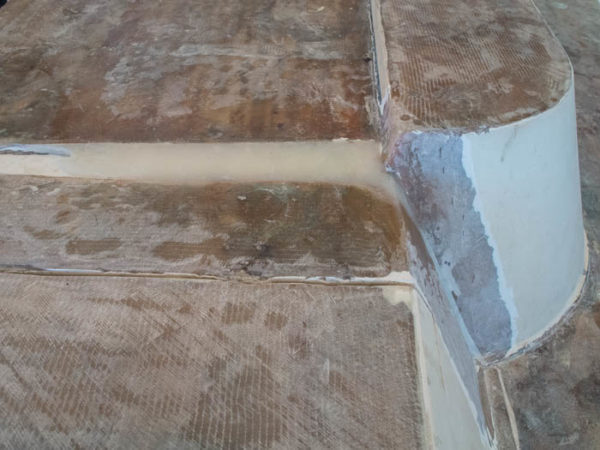 We removed the forward dorade box. Enough ventilation is provided by a large hatch to the front, and two small hatches to the rear. And, as a cutter-rigged ketch, removing the box freed up a lot of precious deck space. 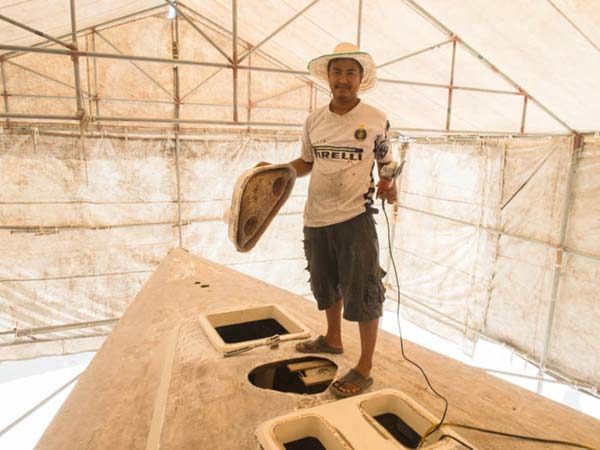 A starboard portlight, which sits above the chart-table where all the vulnerable cables for the boat meet at the switch panel, was removed. It means reducing the amount of daylight, but gives us extra space around the chart table for electronics. We re-built and re-modelled the rear seat-boxes using strengthened glassfibre. The old, damaged toe rail was replaced by a sleeker design, which includes breaks along its length. The old cockpit ply box was chucked out and re-designed with a new curved glassfibre version. 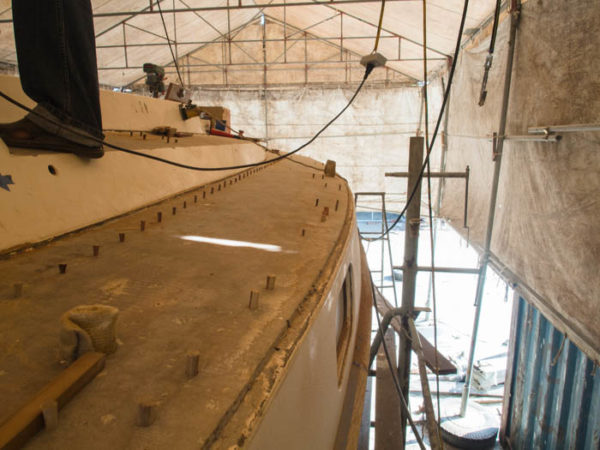 The carpenters filled all the through-deck holes with wooden plugs they made by hand; this ensured we replaced every fitting in exactly the same place once the deck was finished.

In between rebuilding the deck, our paint team worked on the masts, booms, spreaders, other deck hardware, new cockpit boxes, rear box seats and the topsides. The carpenters constructed a new toe rail and repaired the rubbing strake. They also built and fitted new teak in the cockpit, using grey caulking instead of black, more in keeping with Esper’s new modern look. 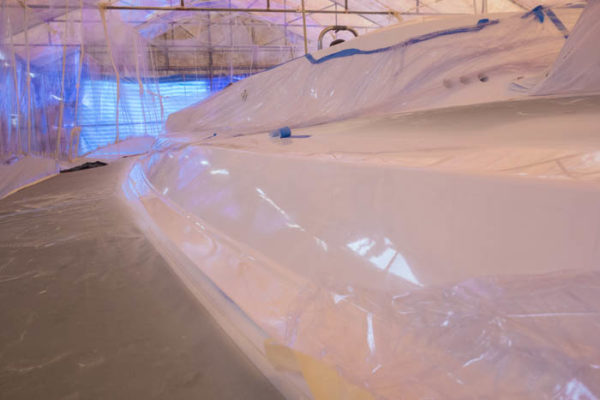 We had fun playing with colours, from considering wild changes like red or yellow to sticking with the original Oyster white. In the end, we chose ‘Snow White’ for everything, apart from the topsides which we changed to ‘Moondust’. We used Awlgrip for the non-slip surface and Awlcraft 2000 for practical purposes. Although Awlgrip polyester urethane forms a more abrasion resistant finish, Awlcraft loses significantly less thickness when buffed, and is easier to repair. 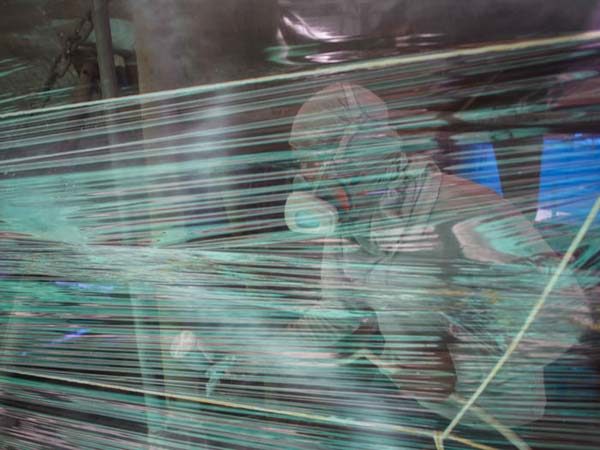 Before layers of undercoat and topcoat were applied, the painters built a clingfilm tent to protect the prepared surface from dust particles. On the days of painting, they poured water on the ground and sprayed the clingfilm and their overalls with any old paint which happened to be knocking around the boartyard. The water and wet paint acted like a magnet for any remaining particles lurking in the air, ensuring a blemish-free finish.

The entire process of re-building the deck and topsides was spread over a few months, including the kind of delays we learned to expect in Thailand: local and national holidays, high humidity, monsoon storms, late paint delivery, martial law, curfews and the head painter going AWOL. But we think the end result was worth it. Do you agree? 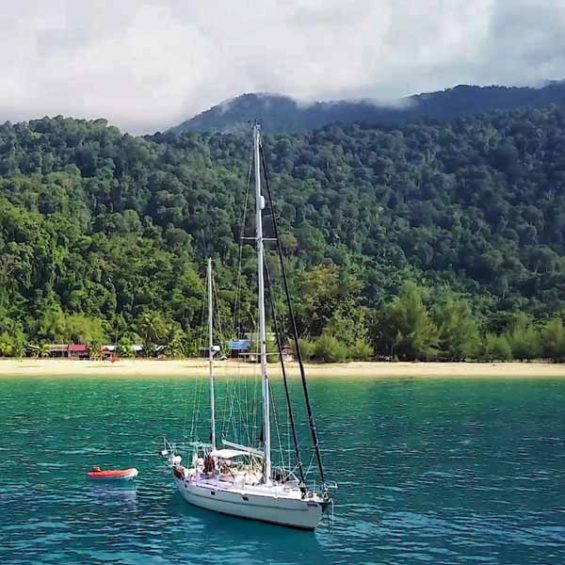 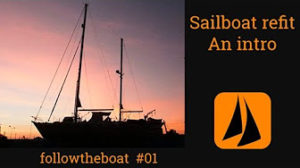