This series of articles on Esper’s complete refit in Thailand was written for Sailing Today magazine.

Remaining on a pontoon in India for two years, despite basic servicing and upkeep, had led to some general deterioration of our boat. But for SY Esper to stand a chance of completing a passage to South Africa, she needed to be in the best possible shape. So we spent a full season planning, servicing and preparing.

Just before we departed, we reinstated the watermaker and had professional port divers scrape the hull. The engine, electrics and electronics, after a great deal of time and money spent on servicing them, were all in working order. The radar had been taken out one night by lightning, but with AIS and continual manned watches, we figured we would do without it.

The Maldives—our first stop—seemed like a pretty sweet place for a shake down. And sure enough, on the second day of our three day passage to the northernmost port of Uligan things started to go wrong. The engine blower over-heated, setting off the heat-sensitive fire extinguisher, and covering the engine compartment in a dirty goo. Then the starter motor began to play up and the batteries started to lose their charge. Jamie made some short-term repairs on passage in the knowledge that we would need to do something more permanent once we dropped the hook. Past problems had often stemmed from degrading or inefficient cabling, much of which we had replaced, and not for the first time, we wondered about the provenance of the cables we had inherited.

Liz at work in the Maldives

Taking the age-old axiom ‘cruising is fixing your boat in exotic places’ to the extreme, we spent the next two months in the clear coral waters of one of the world’s most prestigious beach paradises, up to our elbows in muck, fitting parts, ordering spares and testing and servicing every on-board system. When we hauled out on ‘Rubbish Island’ near Male and discovered osmosis all over the hull, we decided we’d tackle that gut-wrenching problem in Richards Bay. [link to earlier features on our Maldives trip for ST on this?]

Getting through the gale

What we hadn’t counted on when we began our exit towards the equator was an almighty kicking from the gathering southwest monsoon, and confused seas from an earlier typhoon south of the equator. We got hammered. Our already tired veneer and sole boards were damaged beyond repair when the saloon deck hatch broke and let in gallons of rain and sea. The B&G H1000 system instruments, which came with the boat when we bought her in 2005, began to falter. Sections of the guard rail bent in the storm, and some of our deck equipment, including jerry cans, were lost overboard.

Heading to South Africa—at the best of times not the easiest of passages—would be foolhardy. As our visas were running out, and a passage to India would be difficult in the monsoon, the only option left was to make a fast monsoon-assisted ride east.

We arrived in Langkawi as our instruments flickered and died. We had lost our Windpilot three days out of Male one night when the rudder was sheared by a fishing cable, the furler sytem for the foresail had broken, and we had made most of the passage hand-steering with the yankee rolled up in the forepeak. A re-fit couldn’t come soon enough.

There are a number of yards in Malaysia and Thailand, but the general consensus among the world-girdling yachtsmen we met in Langkawi is that Malaysia does not yet have the expertise of Thailand. It’s a great place to do your own work, and as it is tax-free is useful for receiving items shipped from around the world. But it has fewer facilities and less manpower for repairs than Thailand. So we spent a week driving between Phuket, Krabi and Satun, giving them each a list of the repairs we hoped to accomplish. We also quizzed our yachting friends about yards they had used.

Although all of the yards could do the work, the price difference was significant between Phithak Shipyard and Services (PSS) and the rest of them. On paper PSS—just north of the border with Malaysia—could not be beaten on price for haul-out, hard-standing, accommodation and even labour. The yard is also known for its excellent stainless steel work, and as we had damaged guard rails as well as fittings, and were considering having davits made, this was an important consideration. We were budgeting for a long-term stay, so this difference in cost would be significant. After an encouraging two day visit, and confirmation from old friends that they had used the yard with great success, we settled on a date. 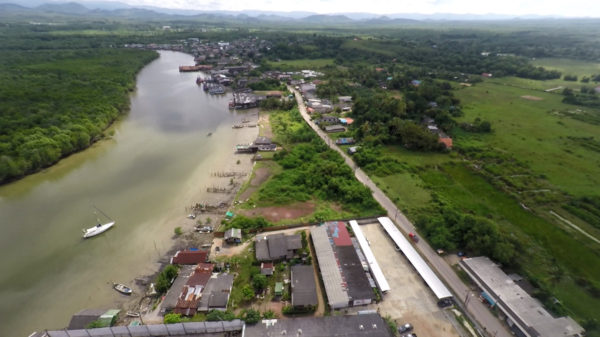 View of PSS Shipyard from above

PSS was built to service vessels from Thailand’s enormous fishing fleet. In recent years it has opened its doors to yachts, and when we visited had already undertaken work on a couple of impressively large vessels. Jia Kittapong, the yard manager, is a visionary who wants to encourage the yachting community. Unlike its smart competition up the road, PSS is a commercial yard: it is dirty, noisy, with no pool or luxury apartments, no bar, no restaurant, a limited chandlery, basic washing and toilet facilities, and it is in the middle of nowhere. It’s probably not the place for the navy-blue-gin-and-tonic brigade.

In February 2014, at slack water, we steered SY Esper into the narrow slipway. No fancy travel lifts here, just a few Burmese workers who manhandle your boat onto a cradle which has already been prepared (you must provide an underwater profile with measurements before arrival). Once she’s secured between pressure pads a cable drags the cradle holding your boat up the slipway into the yard. There she is manoeuvred forwards, backwards and sideways along tram tracks.

The ladder arrived and work began immediately. The workers stripped the deck fittings, while we distributed our belongings between a container in the yard and a tiny one bedroomed bungalow in Satun, 20 kilometres away. Once we had emptied SY Esper, the workers removed the lockers and headlinings to allow access for re-cabling. Finally, the masts and booms were hoisted by crane and taken to a safe place against the wall of the yard.

Removing the masts with crane

Within a few weeks SY Esper had been moved to the edge of the yard and a tent had been erected around her. We were up and running on a project we were informed would take three months, but which we had rapidly re-evaluated to be closer to six. It didn’t take long before we were hoping to be out in a year.

For detailed coverage of all the work, check out Followtheboat’s sailboat refit playlist (45 episodes) videos on YouTube

*Rates PER DAY for labour: