When you’ve spent over three weeks at sea Antigua really is a piece of heaven on earth. We don’t need to tell you what it was like because it’s all that you imagine it to be: warm, idyllic, welcoming and simply stunning. With free-flowing rum and the fact it was approaching Christmas the vibe was fully switched on to ‘party’ mode. Tim, Dobby, Michel and myself rented a shack for a month on top of a hill overlooking Falmouth Harbour and quickly sussed the perfect recipie for rum-punch. Yachts came and went, providing the south of the island with crowds of party people who crammed the local joints like the Mad Mongoose. It wasn’t just sailors who came to visit, though. There were many holiday makers too. One such resort, Pineapple Lodge, a wooden-stilted, open apartment complex tucked up in the hills, played host to a group of Londoners over in Antigua for their Christmas holidays. Liz, Steve and Will were joined by Tinks, Del and their baby. On Christmas day their paths crossed with ours. Just.

We had been out till the early hours on Christmas eve. In fact it was around 7am when we got to bed, so when we woke up at 1pm on Christmas day feeling sick as dogs we almost knocked the day’s celebrations in English Harbour on the head. Fortunately we had the will to get ourselves down there. Christmas day in English Harbour has to be experienced. Of course the weather is fantastic but more importantly there are inflatable dinghies full of ice and cheap champagne, available to all for a few dollars. The live band pumps out tunes to get everyone dancing and any space within the vicinity is used to move to the sounds. Unfortunately we were so ill we were swigging from bottles of Lucozade for the first hour. Pathetic! It was whilst I had my head in my hands that I got chatting to Steve, who happened to be sitting on the same bench. After a few minutes we were joined by an extremely ‘animated’ (read inebriated) Liz, who had just been swimming in the sea in her dress! And that was it. For the rest of her stay in Antigua we hung out, drank cocktails, danced at the Lion’s Den, went deep sea fishing (check Dell’s catch of the day, below) and swam in the warm waters of Pigeon Bay.

Wahoo for lunch. And dinner. And lunch again.

Liz returned to London with all the others shortly after New Year. Tim also moved on, heading up to the BVIs to find work. Michel returned to Israel, leaving Dobby and myself to snorkel and swim on our own. After Dobby found work aboard Cambria I caught a ride down to St Lucia aboard Blue Monkey with skipper Damien Ward and ‘Father Ted’ Edward.

St Lucia is a different kettle of fish to Antigua. It is far more ‘Caribbean’ than the south of Antigua, in terms of scenery, attitude and culture. Rodney Bay, however, isn’t even worth a mention (this is where the ARC ends up so consequently it’s full of McDonalds and Pizza Huts).

To make matters worse I received the news that my grandfather had passed away so I immediately booked a return flight home and made the most of my stay in St Lucia. Edward and I had a laugh making our way down the west coast over a period of a few days. We sailed for a day aboard the cat Bagpuss, hung out with some locals, bathed under waterfalls, met Lord Glenconner, blagged our way into the Hilton, in between the Pitons, and got a lift round the coast on a dinghy at sunset. 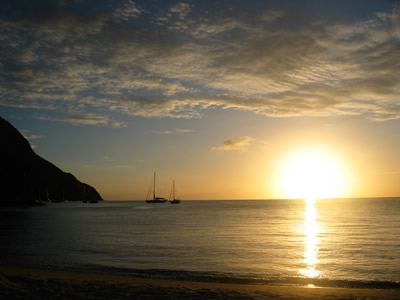 Sunset between the Pitons, St Lucia

When I arrived at Heathrow I was picked up by Liz and as one adventure ended, so another began.

The next stage in our adventure is when Liz and I got together and decide to buy a boat. As such I continued sailing, undertaking boat deliveries to get more experience. Before we begin with that stage in our travels, the next couple of pages will take a quick look at St Lucia and two of the boats sailed in that area.