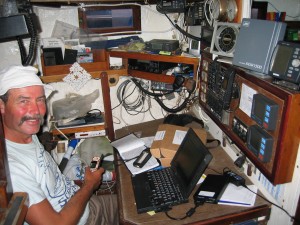 Sorry, did I wake you?

Woke up to Rule Britania at 5.30am this morning. Very loud. What the **** is going on? Is this Sam’s idea of a bloody joke? It was only after Rule Britannia had finished that I realised he was tuning into the shipping forecast on Radio 4. Obviously essential to our safe passage but please don’t let this happen every day – I can’t handle it! Just to make things more difficult I have decided to give up smoking.

Slept in a little longer than the others and found ourselves moored up somewhere else. Ooops. Filled the tanks up with water and made our way down the Solent, heading west to make our way for the crossing over to Cherbourg in Normandy. Saw Kingfisher, which was Ellen MacArthur’s yacht that got her round the Vendée Globe. Dunno what all the fuss is about really. I mean OK she completed the world’s toughest race single-handed at the age of 24, but you should see her yacht! Must have been a breeze 😉

Cruising down the Solent reminded me why I had come on this trip. The sun out, a gentle breeze with plenty of gibing, this was the life. Took the helm and navigated our way around the Needles on the Isle of Wight, at which point we steered due south for Cherbourg. It was a good crossing but it took all day and into the night.

Around 9pm, with the sun setting behind us, we arranged to take 2 hour shifts so I stayed up for both Conny’s and mine, allowing me to take in the carpet of stars above us, the odd shooting star and the tranquillity that the night brings. 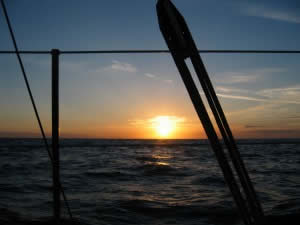 Went to sleep at one but got woken up shortly after as we approached Cherbourg. After mooring up and waking up some moody Belgian next to us we were allowed to go back to bed. 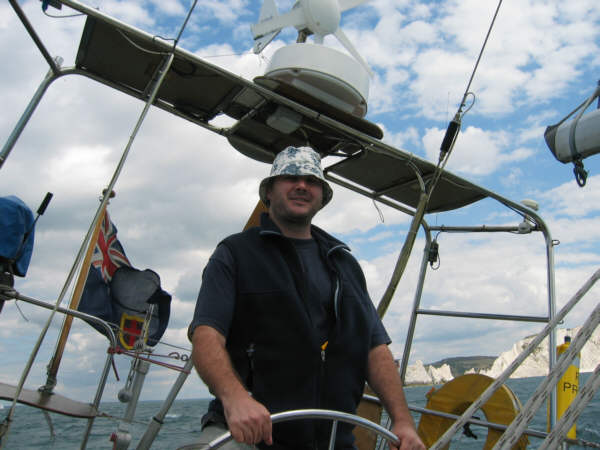