It’s amazing how quickly the rot sets in. I’m not one for hanging out doing nothing at the best of times but having spent two months in the Goçek area I was getting antsy. It’s always great to have our friends and family come out and visit but it was time to move on, get to check out some new areas of the Turkish coast and all that.

Our next desitnation was Kas (pronounced ‘cash’. The ‘s’ should have a sedilla underneath but I can’t remember the html code for it!), a trip that requires a very early morning start and more probably a motor of at least nine hours. Nine hours? In this heat? Sod that, let’s just get ourselves down to the next anchorage! This happened to be Gemiler, a place we’d heard much about from other yotties who suggested asking the restauranter’s son “does your grandfather still play the fiddle?” in order to get a discount on our evening meal. Er, what’s the Turkish for ‘fiddle’? 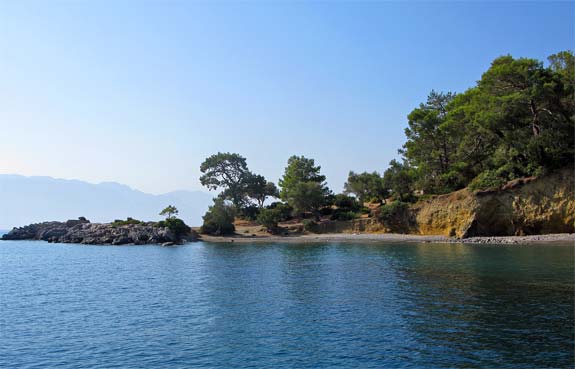 Sadly the spot that our friends were referring to was dominated by restaurant moorings. Our late arrival meant there was nowhere to anchor and as we milled around deciding what to do a fishing boat came out from the restaurant to give us a line. “Are all these moorings for the restaurant?” we enquired. “Yes” came the reply. “Does that meant then that if we take a line we are obliged to eat at the restaurant?”. We knew what the answer was going to be so when we received the affirmative we buggered off up the coast to a quiet little spot and tied our line to the shore with the help of some local kids in a boat selling stale pastries.

Nice spot, this one (see pic, above). At last we were out of the Fethiye bay and could once again go for a dip in the water without swallowing clumps of grass, mud or poo. The water was crystal and we even put the basket out for Millie, who seems to think that we magically turn stale bread into fish just by placing the basket in the water. Sometimes it really is that easy.

The anchorage was a bit rolly, however, so I deployed my Guatamalan string hammock that’s almost as long as our boat and spent the night in that. I don’t mind the backwards-forwards see-saw motion of a boat at sea but that sideways rolly motion one gets at anchor in a swell does my head in. The cat wasn’t too pleased with it either so I scooped her up and plonked her between my feet in the hammock. She seemed to like it. For about five minutes. 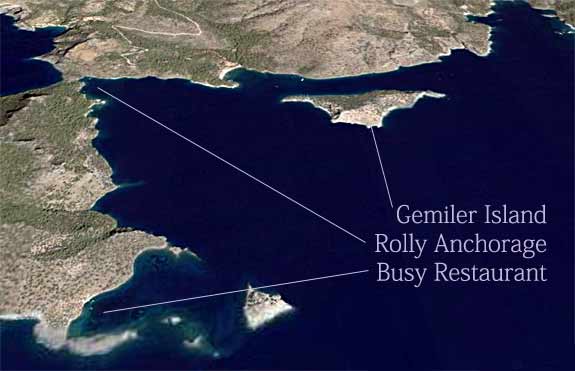