Some people say that if you will something hard enough, it will manifest itself.  Whether this is spiritual clap trap or good advice for a positive mind, as soon as I learned that turtles can be seen from Fethiye bay, I wanted very badly to see one.

Today I bought a postcard for Annie, which had a turtle on it and as I downloaded my e-mail, I got my usual National Geographic report, which funnily enough was all about the leatherback turtle migration.

But, this morning, turtles are far from my mind because we set to leaving Fethiye for Gocek.  Having never sailed before, I was very excited by the prospect of ploughing through the Aegean sea with nothing but the wind blowing us along.  However, as Esper had been anchored and tethered to the pontoon for four months, just leaving wasn’t the breeze I expected.  Scrubbing the barnacles off the anchor chain as it struggled to winch, watering down the debris from the deck, Jamie cursing while we try to free the anchor culminated in my excitement melting slowly away.

I kept my spirits up reminding myself that I wasn’t sitting in my stuffy, tedious office staring at the Oyster calendar on my wall.  April – “Trevor Silver’s Oyster 655, Roulette, is striking sight on the Regatta race course” – could that be me in a few weeks?
Plus, I was doing “Man’s Work!”  OK, so admittedly, it was Liz doing most of the scrubbing, but it was this phrase that pumped me full of testosterone.

It helped, and the hour it took to release ourselves from the thick muddy ocean floor seemed to fade along with the terracotta roof tops of Fethiye Bay.  However, our departure was slowed by a troubled prop – more on this later, but it meant that as soon as we could sail, the better.

Now I learn.  Listening intently to Jamie’s explanations of lines, winches, wind direction and sails,  I try to absorb the necessary information needed to become a useful crew member.  I am also shown the charting software, GPS and the ship’s log.

After pulling some of the lines I had been shown, opening and closing some clutches and winching until my arms ached, the result was not what I expected.  More cursing from Jamie and the realisation that one of the sails was not unfurling correctly.  Backwards and forwards, backwards and forwards we winched, again and again and again.  Will this boat ever sail, or will we have to accept a ramble through the seas and hope that we reach Gocek before sun down?

At last, a positive tone from Jamie’s voice announces the sail is free, more pulling, more winching, more shouting and the “flap” as the wind catches our sails.  The engine is cut.  We are sailing!

The mood lifts, spirits are up, Jamie is happy, so we are happy – that seems to be the way it goes on Esper.  But, not even the sight of Esper, full sail, powering a passage to Gocek could prepare me for the next moment and I am ordered by the skipper to record said moment into the ship’s log “14:55 – 36°38.66N 029°05.918E – SIGHTED TURTLE SURFACING”  Suddenly life seemed to make sense and I experienced similar emotions to witnessing the birth of my daughter – like a rubber band, I felt that by holding myself back from sailing with Jamie for so long, this moment was a bigger release than if I was doing it every day.

Some people believe that life’s emotions are a trade off between those that are good and those that are bad.  Certain personal circumstances have brought me much closer to my daughter, my panic attack on the evening before the flight here and now my sighting of a turtle surfacing while sailing the Aegean sea is followed by a nasty bought of sea sickness.  For the next hour I sit in complete silence, staring at the horizon and willing my stomach to hold out

It does, thank Neptune, and when we reach Gocek, we anchor up some 50 yards from the pontoon and board “Tinker”, a dinghy that has seen better days.  Why is it though, that when men get into a dinghy or a canoe, they feel as though they have to paddle like the clappers to reach their destination? Everything on water is a race, I call it the “Columbus Effect”.  As if I wasn’t already feeling shaky, I fall out onto the pontoon, stagger to the nearest restaurant, named rather appropriately “Kebab Hospital”, and sedate my wobbly legs and queasy stomach with some pide and an Adana kebab. 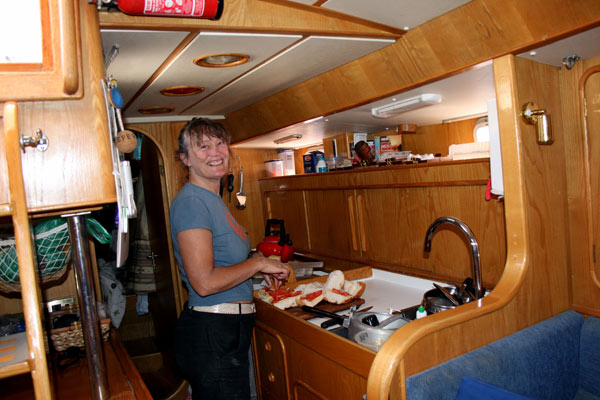 Happy in the galley too

Note to anybody suffering sea-sickness: Stay on deck – don’t go down below to take pointless photos, keep busy, breathe deeply, mentally figure out the fastest route to the safest part of the boat for blowing chunks,  and drink Sprite – (there’s a new marketing campaign for ya Phil).

One Comment on “My First Sailing Experience & The Columbus Effect”