Liz has left me. She has gone and now it is just me, the cat and Esper. To pull myself out of my misery I attempted some single handed sailing, proving to myself and the world that I can stand alone, man against the elements, a conqueror, a hero.

Impressive was the fact that I have never sailed solo before; even more impressive was that I managed to log two continents. Well, this all sounds good on paper, but the reality was that my first week was a complete screaming disaster. Dragging anchors, smashed solar panels, dysfunctional engines and rolling harbours all contributed to me desperately wanting my Queenie back on board. All this is set against a background of consistent 25-30knot winds that have been plaguing the Greek Islands all month. The usual self-deprecation is illustrated with loads of pics (some of my best so far?) and a couple of video clips too.

Sunrise over Orhanye from Kadir restaurant

OK, so I’m being  melodramatic: Liz has left me to return to England to sort out some paperwork. She returns soon, of course, but it is true she left me… with a big list of  jobs to complete before her return. The rest of my introduction, however, is no exaggeration, and here’s how it all happened:

My first week alone was spent doing some of those above-mentioned installation jobs, including five hours up the mast erecting a new VHF aerial (it was worth the effort as I swear I can now pick up space stations). The other jobs just meant drilling holes where I really shouldn’t be, every cavity bored with the anticipation of hitting water.

After ten days tied to a restaurant jetty I’d had enough. It was time to prove to the world that I’m a perfectly capable sailor and so I left Orhanye in Hisarönü Körfezi to make the 45 mile passage to the Greek Island of Tilos. It involved motoring for the first half of the trip but when the winds picked up to a healthy F5 it was time to whack out all the sails and spoon it along for the remainder of the trip. I’ve no idea how fast I was going as the boat speed paddle was blocked. This also meant the autopilot didn’t work so I had to manually helm all the way. Not a problem, this was excellent fun!

The pilot book describes Tilos as an island rarely visited by tourists or yotties. Not so that day as another six boats came in after me. Anyway it was time to deploy the anchor for the first time on my own, which involved running up and down the boat letting out chain and then putting the wheel to starboard to counter the usual cacophony of prop-walk and annoying gusts. Normally when the boat ‘twangs’ forwards it means the anchor has bitten and job’s a good ‘un. John of ‘Odin’, with whom I’d arranged to meet at Tilos, came on the radio checking I was sure the anchor was stuck fast as it was  in this bay that he had dragged the previous year. When I rowed to the harbour to share a sundowner with John I confidently told him that anchoring was one area of sailing I’d studied in my short career as liveaboard and that I felt entirely happy with my technique. To prove my point I recounted my observation of another boat, complete with a new Spade anchor, attempting to anchor six times before giving up.

We met up with Bill and Jo of ‘Arctic Blue’ (affectionately known as Arctic Monkey) and hit a taverna offering the best mousaka any of us had ever indulged in (look out for To Oneipo or Dream Grillhouse), supped a few more beers then headed back to our respective boats. I rowed back out to the anchorage to Esper, who was in exactly the same spot as I’d left her, despite the gusting winds all evening.

And so I went to bed. After a cracking sail I was knackered and, exhausted, I slept like a baby. That was until I awoke to the sound of the most goddamn awful crunching and scraping noise directly above my head. You know they say in moments of crisis everything slows down and your body goes into slo-mo? Didn’t happen. The only reason for my slowness was the fact I was still half asleep, yet even as I hopped around the cabin slipping on my pants I knew somewhere in the back of my mind that Esper had dragged. I got on deck to find the bow of someone’s boat gorged into one of my solar panels with three people running around on their deck grabbing fenders. I was still catatonic, senses dulled by mousaka, beer and a very deep sleep. Lamely I said “I’m just trying to work out who dragged”. What a dumb thing to say! I knew it was me who had dragged yet I just couldn’t believe it. I swear that anchor was in fast. 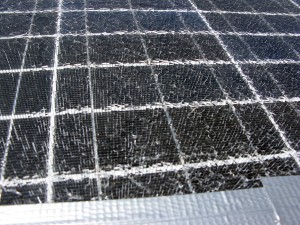 A bandaged solar panel. Many shards of glass!

It was 0330, pitch black and still gusting 20 knots. Fortunately the Greek charter boat I’d backed on to was skippered by someone with very good English. When asked whether I was going to try and anchor again or leave the bay, I mumbled something daft about it being my first time on my own and please could someone help me try and anchor again. My Greek hero boarded Esper and together we weighed anchor and dropped it again, roughly where I’d dropped it before, this time putting out 80m (we were in 10m of water). I thanked him, he left and I spent the rest of the night poking my head out the cabin hatch every 10 minutes. It didn’t make for a good night’s sleep.

Fortunately it was only one of three

When it got light I surveyed the scene. I had dragged over 200m. The stomach churning moment of realisation, however, was this: if I had not hit that boat and inadvertently used my solar panel as a bumper, I would have eventually dragged onto the beach.

Obviously I was shaken by the whole episode and I had that horrible ‘I want my Liz back’ feeling. Of course a few lessons were learned because of this incident, which I shan’t bore you with, and I could so easily have returned to Turkey, tied to a jetty and waited a month for a new solar panel. I didn’t as I knew that would only be a step backwards, but my lessons did not end here…