Kas. Oooh, I think I’ve just died and gone to boaty heaven! You know Kas (pronounced ‘cash’) had always been one of the places I’d wanted to get to ever since my Turkish friend, Taç, waxed lyrical about this place when I first met her three years ago. Indeed as soon as we arrived I sent her a text message to which she replied “finally, after three years you’ve made it”. Bearing in mind that the anchorage we first stumbled upon wasn’t even near the town of Kas (it’s about a mile south), but Liz and I just had a feeling about this place as soon as we passed the Greek Island of Castellorizon and turned starboard into the south bay.

Some lovely shops, but I forgot the Kas (geddit?)

The approach from the west. Not as bendy as the stitched picture suggests. Source: Liz Cleere

The next week was spent divided between the anchorages in the south east of the town, which meant a boat-taxi ride into town (expensive at 5ytl per head, one-way), and in the anchorage to the north of the town, which meant we could take the dinghy ashore to do some shopping. Both are great little spots and come recommended by us. Use the northern anchorage for market day, Friday, because the market is only 100m away. This is also where the paragliders land and hours can be spent watching their graceful sails catch the thermals. They land on the ‘marina’ strip, which is worth a mention. In our pilot guide the author says “At the time of writing work is proceeding slowly on the construction of the marina”, the text of which is accompanied by a photo of the unfinished marina. He states that he was given a completion date of 2001. Well, it’s 2008 and the ‘marina’ looks exactly like your photograph from 10 years ago! Who knows why this marina is taking over 15 years to complete but for the time being the spot makes a great anchorage.

This is the anchorage to the north of the town. Esper in shot, of course.

Same anchorage as above. To the right is 'Pipolder', our Swiss yottie friends from Yacht Marina.

Oh, we did have to do a visa-run to the Greek island of Castellorizon, but we hope to visit there next week so we should have a report on that sometime soon. [Yep, since writing this page we did indeed visit Castellorizon. See next page.] 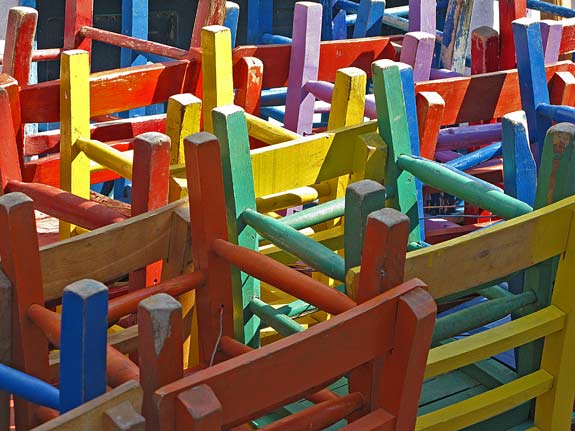 Chairs. Lots of them. Different colours 'n all. 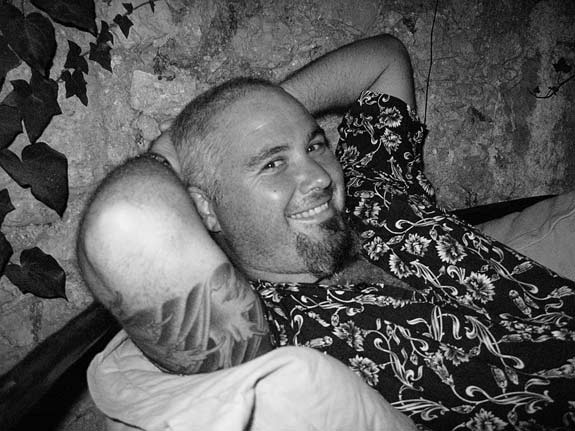 Me chilling in a secluded bar that's so secret we can't even remember the name of it. The Secret Hideaway or something. Source: Liz Cleere

Since writing this log we went back to visit the other little anchorage in the south bay and stumbled upon the family-run Nuri’s Beach Restaurant. We’ve been spending the last couple of weeks agonising over where to get water and noticed that Nuri’s supply water and electricity (their sign actually reads ‘Electric City’), plus a free boat service into Kas town (Liz is on her way there as I type). The jetty and mooring are simple (we’re hanging off a huge fisherman’s anchor) but the spot is delightful, set amongst the rock tombs in the hillside and a smart little beach resort. We went out for a meal at the restaurant last night and it is reasonably priced, offering excellent fare served by extremly friendly and non-pushy staff (for staff read ‘family’). The one annoyance is the boat-taxis who drop off local holiday makers every 20 minutes throughout the day. As I was typing that previous sentence one of the skippers managed to clang his bowsprit on Esper’s stanchion whilst reversing his boat. An apology is a rarity amongst these guys – the “it wasn’t my fault” mentality rules in Turkey.

Nuri's Beach Bar in the sunset. Fat kid wallowing in the water Photoshopped from image 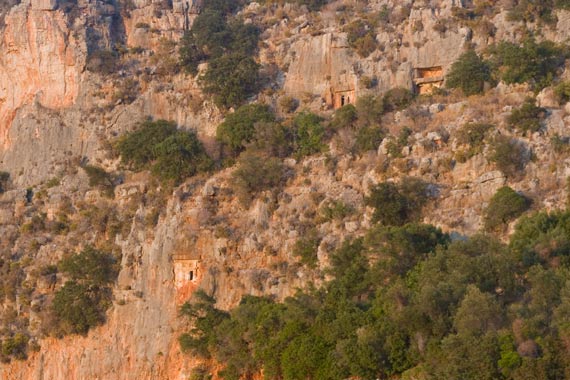 Rock tombs, as seen from Nuri's. 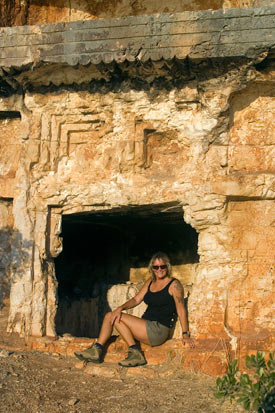 Liz looking down onto Nuri's Beach