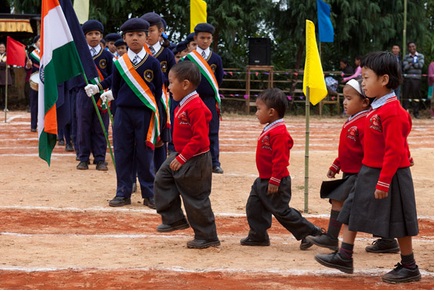 At three years old, the little group in front of us consists of the tiniest children in the arena. They look at each other, then at the crowd, eyes wide and mouths turned down. A referee makes each of them stand up straight with their backs against a measuring stick, and from our position it is not clear if they are supposed to be above or below his mark. Within a three meter diameter circle of dust, the children are pushed and prodded back and forth, until the official decides they will do. There are eight of them; three girls and five boys. Some hold hands while others bounce up and down in anticipation of what is to come, but they all remain silent as the grown-ups fuss around them.

‘NEXT WILL BE THE COCK FIGHT!’ A voice screeches through the distorted PA system. There is not a murmur from the audience. Jamie and I raise our eyebrows at each other.

I like my steak rare, but I don’t think I can idly watch animals fighting for sport, no matter how usual it may be in this part of the world. Jamie, a vegetarian, blanches. As there is no sign of a revved-up chicken or crazed slavering dog yet, we do what we always do, sit and wait to see what will happen. 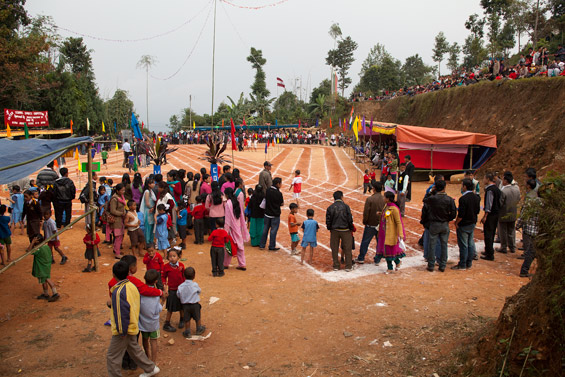 It is November, and although unseasonably warm for the Himalayan foothills of Kalimpong, the children wear several layers of clothing. The students are all from the youngest class of one of the schools, and they look smart in red and grey. They cast bewildered glances at each other as the adults come at them again, this time lifting up the back of their jumpers to fix a length of string—to which a balloon is tied at the other end—onto each waistband. It’s a fiddly process, but the children raise no objection and remain silent as they undergo this indignity.

When the last balloon is fixed to the back of the smallest boy the adults exit the circle, leaving a knee-high knot of children in the middle. A whistle blows. Suddenly the biggest boy grabs the balloon of the smallest and prettiest girl, and squeezes it until it pops! She races from the circle towards her mummy, seemingly relieved to be out of the ordeal. There is a collective intake of breath from the crowd, then a wave of laughter and recognition ripples round the sports ground. So this is the game, the last one with an inflated balloon wins! Now the other kids have got the idea and they try to grab each other’s balloons.

Round and round they turn in the circus ring, and the next few minutes are taken up with dodging, jumping, hopping, grabbing, pulling, stamping and a great deal of falling over. It is the funniest event we have seen all day. In fact everyone is laughing, except the children. For them it is a deadly serious event and they are each intent on winning. 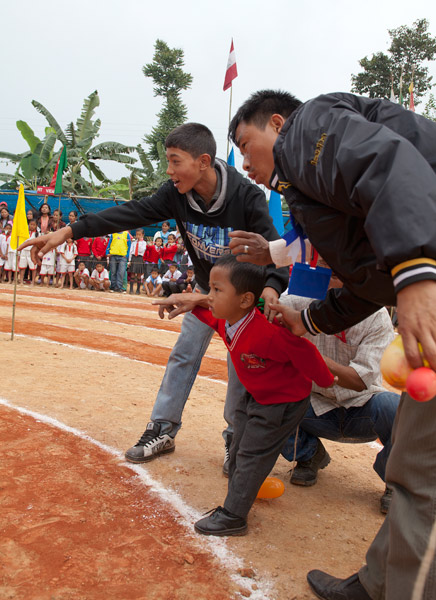 The last girl, who has been good at running away from the boys, finally has her balloon brutally stamped on by the biggest boy and rushes out of the ring in tears. The toughest looking boy wins, but only because the other contender fell over and burst his own balloon. It ends happily with all the children taking a bow amid laughter and applause from the audience. 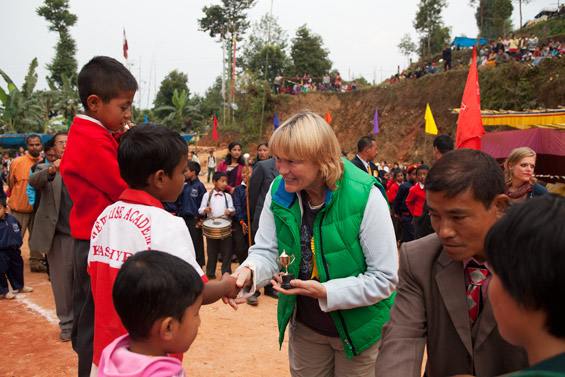 Jamie and I are guests of honour at the Schools Inter Sports Competition 2011, sponsored by the Mondo Challenge Foundation. It is being held at the Alpha Nursery, one of six schools in Kalimpong district, West Bengal. Earlier in the day we watched the schools line up and march, accompanied by their own bands and flag bearers. Ranging in ages from four to eleven, they marched with severe expressions on their faces. Sitting next to us were two elderly Gorkha ex soldiers wearing medals on their lapels. They held pens and paper and made notes as each school marched past.

‘Is this part of the competition?’ I asked Jiwan, the Foundation’s local representative and manager.

‘Oh yes, they were both Subidars in the Indian army. They know a lot about marching.’

The sports field lies on the edge of a high ridge above Barranumber village, next to Alpha Nursery School. Fields and jungle drop down into the river valley a kilometre below. In front of us are Sikkim and Nepal, but the fiercely fought borders drawn on maps by diplomats, kings, and politicians mean nothing to the people of this region, they are Gorkhas and they move seamlessly between countries. The many tribes (Lepcha, Limboo, Rai, Tamang, Tenzing, Bhutia and more) that constitute these mountain people each have their own language, but when they meet together everyone speaks Nepali.

There are no signs of evil chickens or pugilistic puppies for the cock/dog fight, so Jamie and I put the earlier announcement down to a misunderstanding on our part.

Instead, we watch several hard-fought relays round the outer track. Batons are dropped, runners fall over and there are tears of frustration, but in the end all is forgiven and the teams’ places are entered into a big book on the judge’s table. Each race brings enormous cries of encouragement from the participating schools, and we can’t help noticing that two of them are much larger and better represented than the others. Nobody seems to mind.

Jiwan and his brother Santa come to sit with us as the day starts to wind down. The speeches, awards ceremony and celebrations will go on for another hour and Jamie and I will take it in turns to shake hands with the proud winners. Afterwards we’ll have a whisky in the village with the shiny faced bigwigs, all of whom will be thrilled with the success of the day. It has brought more people from the villages together in one place than anyone can remember. Back at the sports ground the remaining stragglers will knock back as many bottles of HIT (local beer) as they can before the day is finished. Then we’ll drive back to Kalimpong with Jiwan, where we will stay in his family town house. More rough wine and local whisky will be passed round as everyone helps prepare the home-cooked dinner, and we’ll end another visit to this beautiful country.

But before all that the PA system bursts into life, ‘AND NOW THE COCK FIGHT!’

This time we know we have heard correctly. Could these dear friends of ours really be intending to have a cock fight on a children’s school sports day? We look round the ground, but there is just a group of six barefoot little boys, no more than four feet high and thin as sticks, standing in the gravel circle. Or rather hopping. They each hold one foot high up behind them. Relief washes over us as the boys start jumping around the circle, mimicking the movement of cockerels. As the crowd eggs them on they try to knock each other down by bashing in to each other.

The Health and Safety prefects back home might regard it undesirable for eight year olds to bash each other into oblivion, but out here, in the harsh mountains, it seems natural. We join in as everyone cheers their favourite player.

Village Discovery Tours
Apart from managing the Himalayan arm of the Mondo Challenge Foundation in West Bengal, Jiwan Rai’s family also manages the Village Discovery Tours.  This not-for-profit business offers visitors to India the chance to experience how local people live in the eastern Himalayas. You can stay in a traditional village home, eat home-cooked food, walk in the fields and forests, and fish in the river. The total cost of the trip is ploughed directly back into the participating villages. The business has been on hold, but they are in the process of re-launching the website. If you would like more details please contact us.

Mondo Challenge Foundation
“We believe in community based programmes, providing education and business support projects to those who are most in need. Our local managers guide and monitor donations. This enables us to act quickly, with the support and help of local people, on grassroots projects that make a huge difference to people’s lives. Our efforts are focused towards providing support for education at all levels, as well as working towards the relief of sickness and financial hardship…”

95 Comments on “The Himalayan Olympics: Wanderlust Magazine blog of the week”

Searching for safe anchorage in 25+kts with a fast