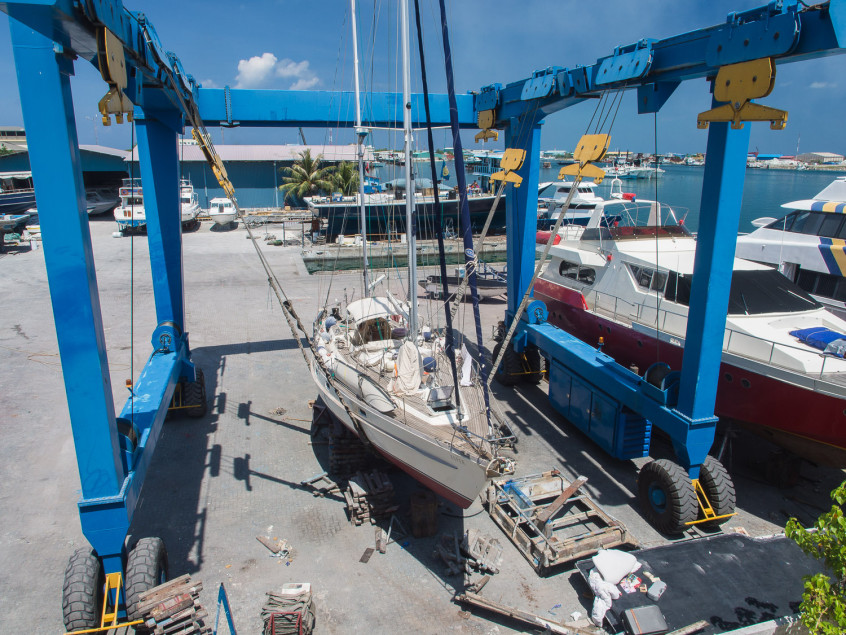 The Maldivian island of Thilafushi was infamously documented in the BBC series Indian Ocean with Simon Reeve. Venturing onto this elongated horseshoe-shaped island, just a few kilometres west of the capital Male, Reeve was pictured gagging as he made his way around the huge burning rubbish tip where refuse is constantly smouldering. This is Rubbish Island where, in an effort to battle the ever-increasing rubbish disposal issue, the Maldives dumps its waste. Reeve spent most of his time swallowing flies on his visit here. Would our visit be any different?

Sitting opposite the smoking garbage on the northern strip of the island is Gulf Craft, which offers some apocalyptic views of this phenomenon, especially at night. Our week at this location was made insufferable by both pesky flying insects, and the fact we chose the hottest week with no wind to haul out.

Fortunately we were in good hands: the people of Gulf Craft really looked after us and made our necessity slightly more bearable with their expertise and willingness to help out at any occasion. Prevailing winds also kept the worst of the smoke from the pyres away from the north side of the island.

Even satellite and aerial photographs show the dominance of the burning rubbish. Source: unknown

Here now continues a breakdown of our time there, which is really a document for our own records. Liz has written a more personal account of our time here, which we’ll publish soon. It makes for rather amusing reading.

Entry
Entry into Gulf Craft could not have been easier. Approach from the north through the dredged channel, where the shallowest recorded depth we saw was 2m beneath the keel (we’re just over 2m draft). Sitting in the lee of the lagoon there is no wind or tide, something that had made entry into our previous choice of boat yard impossible. We waited around for an hour as the boat in front was lifted but we pottered around in this protected bay without issue. The slip is around 7m deep. 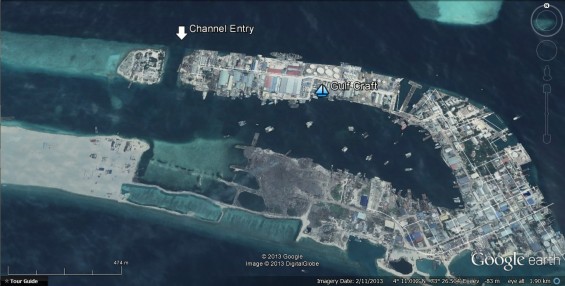 Haul Out
It took us an hour to work out where the lift operator was stationed. Normally they sit somewhere on one of the verticals of the 150ton crane, but we couldn’t see anyone on the lift itself. Eventually we realised he was standing in the shade, operating the machine by remote control! Never seen anything like that before. Normally we have to remove the back stay to fit into the crane but this one was big enough to make removal unnecessary.

Unusually we stayed on the crane when we were hauled out (see previous post). A little silent video clip if you’re interested (at the time of publishing this post the video clip is still being processed by youtube): 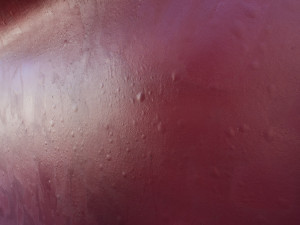 As a result of not being hauled out for four years Esper has developed some osmosis, which was apparent all over the hull. The rudder in particular was bad but weeping blisters had appeared anywhere from the waterline to the keel.

Aheed, the manager, came over to inspect our hull and said that it was something he sees a lot of in the Maldives. He was quick to check the problem and offer some solutions, none of which we could take him up on since we only had five days on the hard.

One of the Sri Lankan workers gets to work on Esper’s rudder. We said we’d do the work ourselves but they insisted!

When we made public our osmosis issue, we received a number of supportive messages from yachtie friends. Osmosis is a subject I researched some years ago when we first bought the boat, so I always knew what it was and how to deal with it, but since the hygroscopic properties of osmosis can take many years to dry out, a quick week in a tropical boatyard was not going to have the hull ready for treatment. Grinding out the hundreds of blisters and filling them in the few days we had available was never going to be possible, so we had to make some decisions.

Fortunately, the nice people at Gulf Craft offered to treat our rudder for us. It was never going to sort the osmosis problem out but they were keen to see us right and so we allowed them to grind out the most offensive blisters and fill them, saving us some time to crack on with other things. There were many more blisters on the hull but since we had just a few days to complete all the jobs on our list we made the decision to leave them until we reach South Africa, where we can attend to the osmosis properly.

Jet Wash
We used over two tons of water for our jet wash! Environmentalists can rest easy since Gulf Craft has its own reverse osmosis plant. It was the most thorough wash I’ve seen and made cleaning the hull a whole lot easier for us. Well worth the little extra we paid for the water, which worked out around a tenner per ton.

Facilities
We made use of the office workers’ shower-cum-toilet. The shower was excellent, perfect for cleansing our filthy bodies of the usual dirt ones body accumulates whilst working in a boat yard.

Next door to Gulf Craft is a great restaurant serving south Indian food all day. Many of the workers here are from India, Sri Lanka and Bangladesh, so it was home-from-home for us. On Friday, their day off, men in skirts (lunghis) can be spotted washing and drying their overalls around the yard.

Stores
Within Gulf Craft is a store room. You set up an account and just nip in there whenever you need something. Bearing in mind Gulf Craft builds fibreglass boats from scratch, this store is probably better stocked than most commercial chandleries. This is a nice touch and saves a trip on the ferry to Male for hard-to-find wood screws, hose or sandpaper.

Anti-Foul
Having purchased some International 155 in India at a good price, and bearing in mind that we are planning to haul again in a year, we put just one coat of anti-foul on over the primer. According to the guidelines this should last 18 months, so we’ll see how we get on with that.

We asked Gulf Craft to put us back in the slings first thing on our last day so we could remove the chocks and paint the gaps. We were woken on our last day by the crane operator positioning the crane around Esper as requested and, once the chocks were moved, Gulf Craft employees started sanding the gaps and then painted them without us even asking. Brilliant.

Conclusion
It was a frustrating time for us, discovering extensive osmosis but only having a week on the hard. The heat and flies sometimes made our time out the water a misery and every evening we’d gaze up to the stars, willing the moment of being dropped back in the water to hurry up. Boat yards can be fun places, but in the tropics under a time constraint this wasn’t one of those occasions.

That said, Gulf Craft was a great place to haul with professional expertise at hand if ever we needed it. I have to say I couldn’t fault their service. 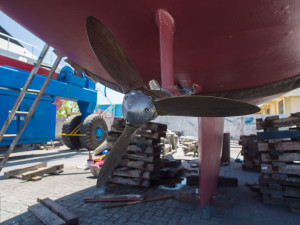 Our Maxprop. Had I put the blades on the wrong way round?

When we left Gulf Craft I noticed that Esper had no torque. She was slow to pick up speed, made a very strange whining sound and was producing an odd wash. It took us rather a long time to pass the closest reef and into open waters, where I popped on my mask and dived down to inspect the prop. There was a bit of current so I wasn’t able to dive under properly but the prop appeared to be ok. Liz was convinced it was the tide that had us doing just 3.5 knots speed over ground, which was a fair assumption since we had been doing quite a bit of motoring in the Maldives against a current. Still, with all the anchored tankers pointing in the opposite direction this didn’t make sense.

We motored back to the Hulumale anchorage, all the while knowing there was something wrong. Since I had taken the blades off the Maxprop whilst on the hard I was bothered by the possibility I may have put them back on incorrectly, which would warrant another haul out to correct my stupidity. Anchoring in Hulumale Esper just wasn’t behaving correctly and again I had little steerage whilst trying to manoeuvre ourselves. With the anchor set I went down to take another look. This time I spotted the dirty great piece of plastic that had wrapped itself between the rope cutter and the P-bracket, which took me five minutes to cut free.

We can only assume that we’d picked it up when we were dropped in the slip which, being on Rubbish Island, was full of rubbish! 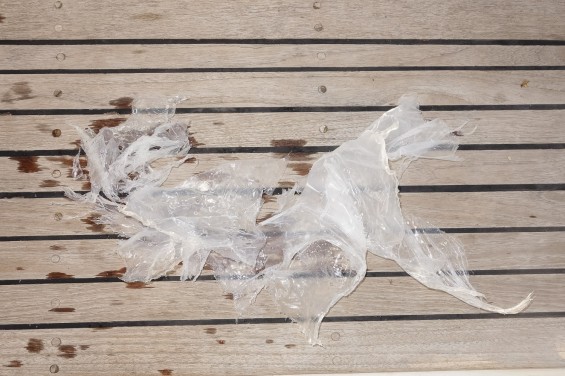 Contact Info
Gulf Craft is a ship building company based in Dubai, with a boat yard on Thilafushi, Maldives.

4 Comments on “Hauling Out In Gulf Craft”

The eyes of a skipper who's just sailed through a

Prettiest boat in the marina? Trawler with sails.

Fifteen hours of lightning and squalls. After the

Liz explaining why she can't be arsed to tack. Mor