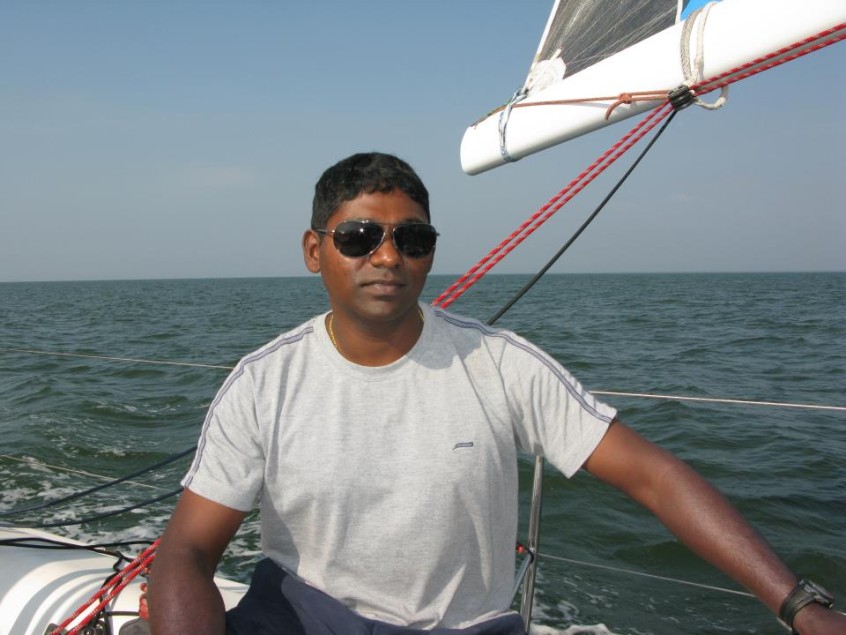 Boat ownership is a mix of ups and downs. Elation when you fix a problem, frustration when something goes wrong. Yesterday was a winner for us as we solved a number of issues, moving us closer to our intended departure. Today, however, was a shitty day as we discovered a leak in our diesel tank and realised the engine starter circuit problem I thought I’d got to the bottom of is nowhere near resolved. We can’t do anything about this as the whole of India is on ‘strike’ for the next two days (most locals are calling it a holiday) and we were supposed to be leaving within the next week. It’s doubtful that’s going to happen now and I’m feeling a little depressed about it. But for every person who’s having a crap day there’s someone else achieving small victories. Take our Indian friend Gladwin, for example. Gladwin has been assisting our friend Bryan over the last few years, working on the boat Bryan built from scratch here in Cochin, s/y ‘Suryani’. He’s been Bryan’s apprentice, learning all the tricks and skills involved in boat ownership. In order to get a commercial boat license, however, Gladwin has to take a swimming survival course. Nothing wrong with that, except one minor issue: Gladwin couldn’t swim.

At the tail end of last year I started taking Gladwin swimming in the hotel pool. When I say he couldn’t swim, I mean he was too afraid to jump in the water. He didn’t know the first thing about keeping afloat and spent the first lesson drinking most of the chlorinated water. We spent a number of lessons teaching him the basics, taking me back to my childhood when I learnt to swim, a skill that now comes second nature to me: treading water, breathing techniques, sinking to the bottom of the pool and eventually co-ordinating arms and legs just to stay afloat.

As I got more involved in boat preparations our neighbour Brian of s/y ‘Chinook’ took over the swimming lessons. He carried on where I left off and really put Gladwin through his paces. Gladwin, meanwhile, never once crapped out. His sheer determination was admirable, all the while being encouraged by Brian to keep up the hard work. And hard work it was too. I don’t remember what it was like not being able to swim, but I can imaging as an adult it must be terrifying, but with Brian at his side Gladwin kept up the lessons.

It has paid off. Now Gladwin, just a few days away from his swimming survival test, is doing entire lengths of the hotel pool! In the short space of three months he has gone from complete non-swimmer to a competent Olympic athlete, today completing three lengths! When I left him in December he was just about completing a width, which just goes to show how much his tenacity has paid off.

Next time I get angry with my engine I’ll think twice about throwing a spanner at Liz in frustration. I’ll take a look at this clip to remind myself that dedication and patience pays off in the end.

Clip from Brian and Debbie of ‘Chinook‘.

One Comment on “Good Days, Bad Days – It’s All Relative”