You’ve got one day to visit Cairo and see the sites, what do you do? The Egypt guide book devotes 62 of its 403 pages to the capital city, so it is a tough choice. Neither of us had visited Cairo before so we chose the two obvious places: the Pyramids of Giza and the Egyptian Museum.

Mohammed picked us up from the marina at 06:00 and, as you can imagine, we were full of the oh-be-joyfuls and dewy-eyed delight at the dawning day, or is my memory a little hazy here? He was right to suggest such an early start; we arrived in Giza just before the gates opened at 08:00. Note to anyone who’s considering visiting the Pyramids: get there early, entrance to the Great Pyramid of Khufu is limited and tickets are dispensed on a first come first served basis, they had all gone by 09:00.

Don’t let anyone tell you otherwise: the Pyramids Do Not Disappoint. Far from it. Even through jaded eyes and lifelong over-worked symbolism they are magnificent, other-worldly, splendidly breath-taking. Jamie photographed them from every angle, while I tried to imagine what the area would have looked like during its prime, with the white limestone glistening exteriors of the Pyramids intact and shining. The three at Giza were built by a father, son and grandson around 2570 BC and I think we should be impressed by this; how many of today’s building’s will still be standing after 4,500 years? The Gherkin? The Pompidou Centre? The Sydney Opera House? Streatham Ice Rink? Of course, Battersea Power Station will still be there and they’ll still be trying to work out what to do with it.

Inside the Great Pyramid is anarchy. It is a dark, claustrophobic and frankly quite nerve racking place to be, especially when you are caught front and back by a nervous line of tourists (you know people are scared because it suddenly goes quiet, with nothing but the sound of footsteps and shallow breathing). It is not for the faint-hearted as you get swept along in single file, being forced to choose which bit of your body you want to rub against the stranger coming back down, through the same narrow 1 metre width, 1.3 metre high passage. It's also hot in there. It took me back to the Northern line at 5pm on a warm, wet, winter Friday. At the top we reached the King's tomb, containing a granite sarcophagus and lined with large granite slabs so perfectly honed and fitted that it's easy to see why some people believe the ancients had other-worldly help. It was quicker going down.

Back outside in the shocking light of an Egyptian morning we wandered around the area. This hassle-free event might have been a surprise for us had we not taken precautions. Firstly, we were accompanied by our unusually-for-an-Egyptian laid back and quiet driver. Secondly, I wore a long kaftan over long trousers with my fair hair hidden by an all-encompassing scarf and Jamie wore long trousers and a long-sleeved shirt. Sure we still looked like foreigners, but unlike many of our inappropriately clad cohorts (teeny-weeny strappy tops with micro mini skirts or bum-hugging sprayed-on shorts, and that was just the blokes) we didn’t invite trouble. It was these clots, dressed for the beach or a night out in Ibiza who had all the attention of the sellers and ne’er-do-wells while Jamie and I sailed straight through the throng without being grabbed.

We gave camel-riding a miss, figuring we’d probably find somewhere a little less touristy at some point later on in our travels. We found a couple of tombs which were especially opened for us by funny, smiling guards who were grateful for a little baksheesh. It was nice to be able to stand quite still in these tombs without the noise and mess of other tourists around us. One of the carvings was of a man’s head with sticky out ears and a remarkable similarity to Obama, an observation eagerly pointed out by our giggling guard.

They are still excavating most of the sites in Egypt and as late as 1954 what is probably the oldest boat in existence was unearthed in a trench near to the Great Pyramid. It is now on display in its own boat-shaped purpose built museum. Did we take a look? Of course we did, we're yotties!The Sphinx was as inscrutable as all the photos but sadly quite dilapidated. I read that there have been many attempts to restore it and that it is an on-going concern. The stone is being eaten away from the inside by a kind of 'stone cancer'. There was evidence of the monument being completely re-built from the bottom up. Jamie and I discussed the merits of restoration and decided that if the only way to preserve it is a complete re-build then that would be better than losing it altogether. I wonder what my archaeological conservator brother thinks?

Inside one of the tombs

Did you know that the Great Pyramid of Khufu was the tallest artificial structure in the world until the building of the Eiffel Tower in 1889? I expect you already knew the Pyramids are one of the Seven Ancient Wonders and the only one still standing. Can you name the other six? We’ve ‘seen’ two others: the Mausoleum of Halicarnassus and the Colossus of Rhodes. What did those ancients know anyway? Just because they hadn’t seen Stonehenge or the Great Wall of China doesn’t mean to say that they weren’t pretty wonderful too… and they are still standing. 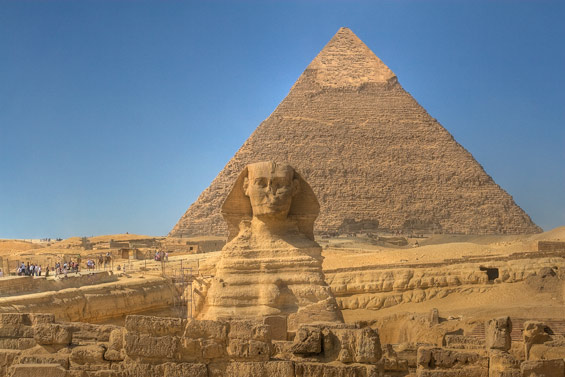 Better out there or in here? Living on a #sailboat