Millie took her inspiration for tai chi directly from nature

So we left the anchorage at six in the morning as planned. (I know you’re not supposed to start a sentence with the word ‘so’ but I find myself wanting to do it frequently. So…) We’d been advised to do this by both friends and the pilot book, all of whom warn of Yedi Burunlar, the Seven Capes, that can cause havoc due to the prevailing winds and the shallow seas close in. Well fortunatly there were no prevailing winds so our proposed route taking us three miles off-shore was binned and we tucked ourselves closer in a mile offshore. This didn’t avoid that rolly motion caused by the sloppy sea, however, and with no wind to sail this was a very frustrating motor. A James Bond audio book calmed our nerves. On Her Majesty’s Secret Service. Great book. It inspired us to watch the film that night too. Why does George Lazenby get so much stick? He was pretty close to the ‘real’ Bond. Damn, wasn’t Diana Rigg fit too?

Our plan had been to anchor off Kalkan, rather than do a straight run to Kas. We’d heard good things about Kalkan so we anchored in a spot recommended by two friends. The dip in the water was a real treat as somewhere close by there was a cold-water spring in the sea-bed, causing random little spots of cool water in the otherwise bath-temperature seas. Alas a quick dive down to inspect the anchor showed that we were on top of rock. In fact the anchor hadn’t dug in at all, it was the chain wrapped around the rock that was holding us in place. One 180° turn in the night could have been disastrous so we upped anchor and decided to head to Kas instead. 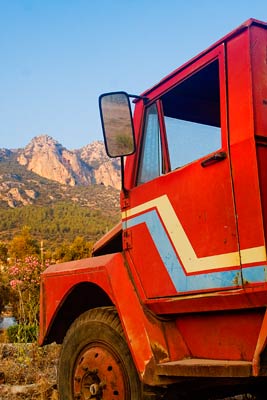 A truck and a mountain 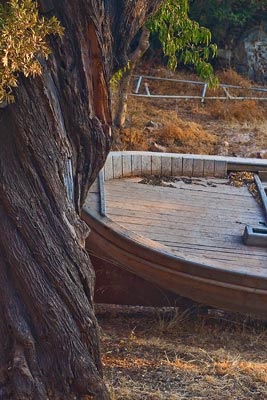 A tree and a boat. You'd never have guessed.