Trash Hero is an exciting, progressive and positive movement that has won the support of locals, tourists, business and government. We’re going to find out a bit more about Trash Hero, but not before the Malaysian Coast Guard intercepts Esper’s departure.

Just as we’re getting into the swing of being back on the water our adventure is curtailed by an approaching rib, and the Malaysian coast guard flags us down.

The young coastguard officers are polite, friendly and accommodating of Millie, who invited herself aboard their rib. But this boarding was unusual, we’d never experienced anything like this before in Malaysia.

Just a few days later in the news were reports of thousands of Burmese Rohingya immigrants landing in and around Langkawi. Security was on high alert and explained why there had been such a strong coastguard presence.

With Millie safely back on board Esper, and coastguard friends satisfied with our paperwork, we continue up the coast, making the most of the break in the weather from the earlier storm.

We find our way along the west coast of Langkawi and towards the anchorage of Telaga. At around seven in the evening the sun starts to dip towards the horizon and casts a pink glow from behind the mountains and across the waters. The sunsets here are often spectacular, and this evening was no exception.

In the last couple of months we’ve dropped the hook at this anchorage three or four times. But we were sure this was going to be our last visit for a while, so we make the most of the ambiance, including Millie, comfortably ensconced atop her throne. 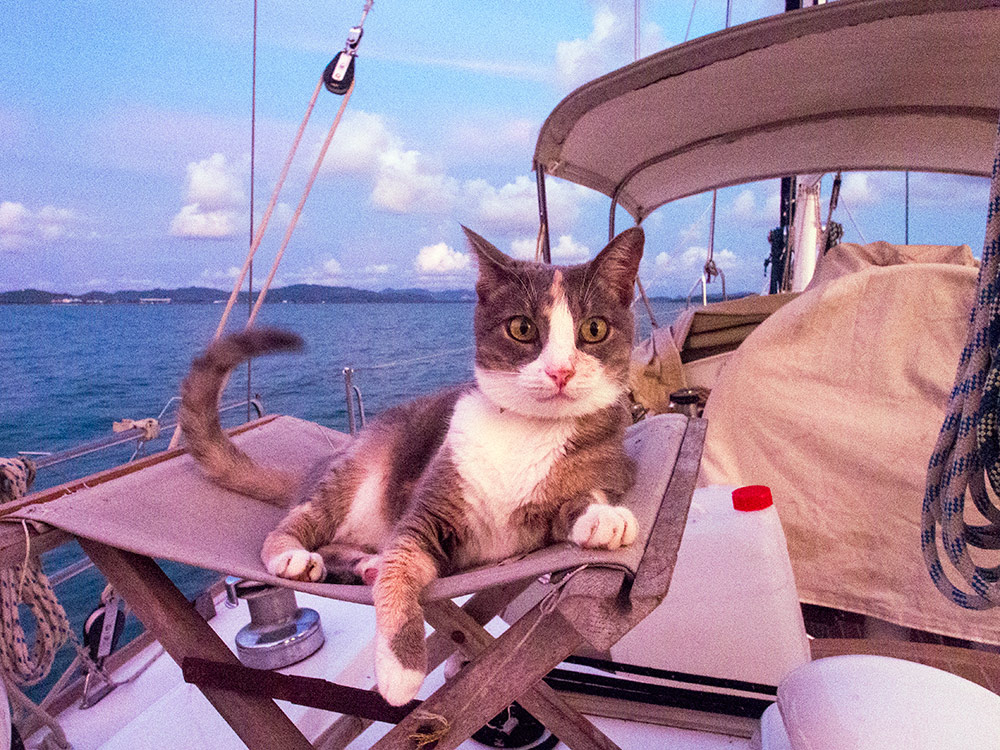 It’s an early start next morning and as we motorsail away from Malaysia across the Thai border, we catch up with our resident fishing expert (oh, that’ll be me then) who explains about the one that got away.

Unfortunately we didn’t catch any more fish whilst trolling, but as we approached the anchorage at Ko Lipe I was feeling positive. That’s nothing to how Millie was feeling when I make our first catch at anchor with friends Neil and Margie.

Arriving and then fishing in Ko Lipe 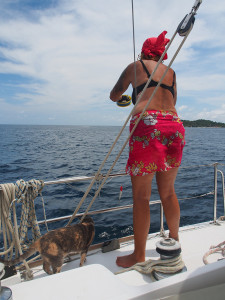 With clear waters north of Ko LIpe fishing off the side of the boat is quite easy. You’d need to catch a few of these tiddlers to make a meal, but two or three are enough to keep someone aboard Esper sated.

Liz spends a lot of time fishing at anchor. It’s calming and therapeutic but really its an excuse to bond with Millie-the-cat, who loves watching. As soon as the rods make an appearance, she is by her side, using her feline powers and x-ray vision to help spot a good catch. It’s not uncommon for us to be fishing at sun up, as well as past sundown.

The next day we go ashore. Having been to Ko Lipe twice before now we’ve covered off this island pretty well in our previous videos. But this trip turns out to be a little different.

Trash Hero is an initiative set up by some locals and tourists. The concept is simple – tidy the beaches on the surrounding islands and recycle the trash.

We catch up with Peet at the OMG bar and find out some more about Trash Hero. Peet explains how they got in touch with the government authorities, including the Tarutao National Park and the Thai navy. They now have the complete backing of the Lipe Tourist Information organisation, and they’ve been granted permission to set up camp on the beaches.

See the video for the complete interview.

For Trash Hero, please take a look at: