You’ll excuse me if I don’t often mention the time of day during this log but I made a conscious decision to leave my watch back home, something I recommend to anybody on holiday.  I don’t know what time the muezzin wailed into my dreams but even though Jamie had warned me of the Islamic call to prayer, it is still a shocking sound to wake up to – give me Church Bells any day.  Luckily I was still drugged up to the eyeballs and soothingly found my way back to my dreams of disciplining children on a beach.  I allow my dreams to linger as my mind realises that for the next 8 days, I can and I will ponder, romanticise and dream some more.

The weather smiles at me and I wake up to a breakfast I wish I could have every morning.  Sitting up on deck, sunlight working my pupils, I am passed fresh bread, soft butter, pine honey, raspberry jam, natural yoghurt, boiled eggs, ripe tomatoes and, best of all, strong, aromatic, freshly ground coffee.

A very relaxing start to our holiday involved a stroll around the back streets of Fethiye, off the beaten track, so to speak.

Off the beaten track

This started with a climb over the top of the 2nd Century, Roman, Telmessos theatre which was uncovered as recently as 1993.

The Turks, though very proud of their history, seem to have a very carefree attitude to their ancient ruins – go anywhere older than 300 years in the UK and you will be stopped, charged, handed a guide and hassled for membership.  Here, you are free to walk in, ponder, touch and possibly even damage at your leisure.

During this walk, I discovered just how friendly the locals can be.  As we walk past the white limestone buildings, orange trees and rusty gates of people’s homes, we are stopped by a friendly family, sitting out on their veranda having lunch.  They want to know all about us, where we are from and what we are doing.  It surprises them to learn that Jamie and Liz can temporarily regard themselves as local and in turn I am surprised to learn that the wife, originally from Hawaii, spent sometime in Australia and ended up marrying this Turkish guy – thus they spoke very good English.  Their sweet daughter steps into her daddy’s boots, stomps out into the street and throws a frisbee at me. I find this all very friendly and I think of my own family life back home.

Further on we become a little confused as to which back alley to take up to the top road.  Short of trudging through somebody’s garden, we decide to descend, only to be stopped by two traditionally dressed women who insist on giving us directions.  It turns out that a set of steps which were guarded by a charming black Labrador were in fact the correct route and we soon find ourselves onwards and upwards.  Even the dogs here are friendly. 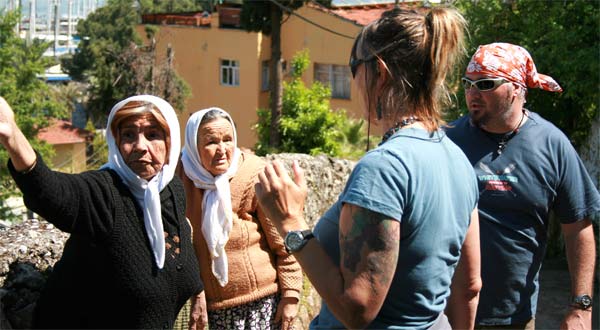 Getting directions from the locals 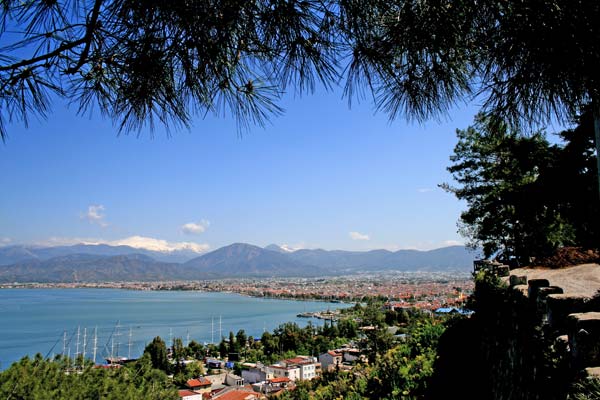 View across Fethiye bay from our walk

We pass some of the familiar Lycian tombs which have been carved into the rock, some of which held the bodies of ancient kings. 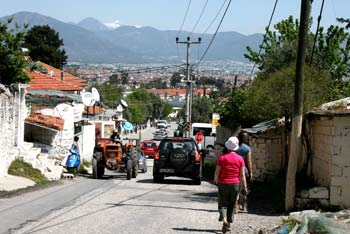 Descending back into town...

You will excuse me if I refrain from giving you all the historic detail on Fethiye, but in the last 5,000 years it has been claimed and conquered numerous times, been given different names and had many occupants.  All this is quite incomprehensible to me, possibly due to my lack of a doctorate in archaeology; I might not understand, but I am certainly interested.  (Note to self: study up on the Byzantine Empire.)

On our descent back into town, something is going on.  The main street is cordoned off, school children are scattering the footpaths and bands are playing.  It is only when we get to a huge billboard, lighting rigs and television crews that we realise we have walked into the 45th Presidential Cycling Tour of Turkey.  A sharp exit down a side street and we walk to the edge of the bazaar and have some lunch. 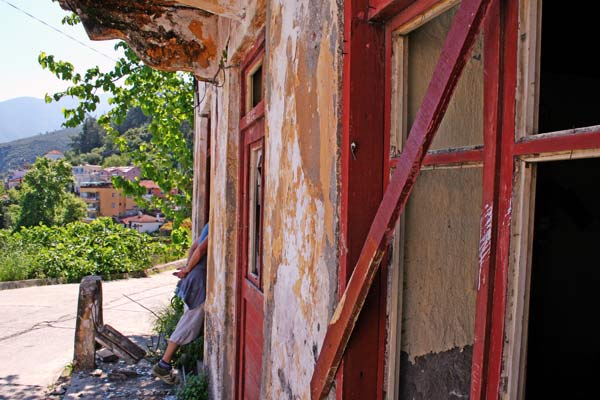 The bazaar in Fethiye is quite good, a mixture of European shop fronts with Arabic selling techniques.  “Hello Sir, come, you sit, have some tea – some Turkish delight?”  Don’t mind if I do actually and I sit myself down with one of the market traders and tell him my life story.  It is only when I go to leave, he seems rather displeased with me – you mean, after all this friendliness, he actually expected me to spend money?  How naïve of me.

This evening’s meal was actually located on the edge of this bazaar.  The usual, grab-customers-from-the-street technique was adopted, which I would normally have objected to, but something was quite appealing about those Adana Kebabs staring at me from the refrigerated display cabinet.