“Hang on, hang on…did I miss something? Straight to Number Na-na-na-na-na-na-nineteen? What about Episodes #17 and #18?”

Ah, yes, sorry about that, we have released two more video episodes on YouTube since the last one we posted here on the blog. But today the very latest instalment–Log #19–has gone live, and normal service has resumed.

Guess we need to explain the long silence…

Many of our fantastic, loyal followers will already know that we have had a bit of a tough time recently. If you follow us on Facebook, you will be aware that Liz had to return to the UK in mid December because her mum was gravely ill. Dorothy has been suffering from Parkinsons for years, and as she heads towards ninety has been doing pretty well at home with the assistance of a full time carer. But sometimes she takes a bad turn for the worse.

With Liz away, Jamie has been struggling on in Thailand, and with her encouragement has been sailing off on his own to all sorts of new places (check out Facebook and Instagram to find out what he’s been up to in real time). 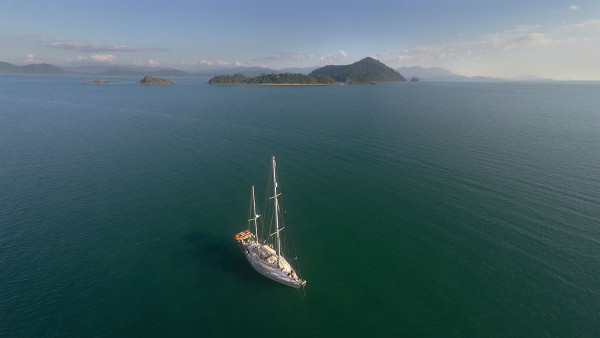 Jamie all alone on the border with Burma

So Jamie has been concentrating on servicing and maintaining SY Esper, and Liz has been tending to her mum.

The good news today is that Liz is heading back to Thailand at the end of February because once again Dorothy is comfortably ensconced at home. Hoorah!

Dorothy with flowers and a smile

This means we are now trying to play catch-up with the website, Patreon and other commitments. Look out for more posts soon…

If you don’t subscribe to our YouTube channel, you may have missed the previous two episodes. They cover the time we spent in PSS Shipyard repairing the damage to SY Esper caused by a steel barge ramming us at Ko Phi Phi Don.

So let’s get right up to date with the story…

We had two weeks in which to get everything completed before the next spring tide. Half way through, Liz had to return to the UK for the first time in 2015…

With Jamie now on his own, the work was completed on schedule. But wouldn’t you know it? Just as he was preparing SY Esper for departure, he discovered a fuel leak in the diesel filler pipe. The pipe continued to leak throughout the afternoon while Jamie searched for a replacement.

He could find nothing that would fit, so there wasn’t much Jamie could do at this late stage other than mop it up. Everything else was OK, so he decided to launch with a patched leak. He’d worry about fixing it at anchor. Later.


With Liz gone, Jamie called on Jia (the boatyard manager), Julie, Dan and Mae to join him as crew. Although they spend plenty of time at sea on fishing trips, none of them had ever sailed on a yacht. They jumped at the opportunity to learn the basics on board SY Esper, and Jamie was thrilled to have a team of four eager new crew members.

It must have been a strange sensation for Jia to be sitting on SY Esper as she glided from the slipway. He normally watches these manoeuvres from the riverbank, waving to people and yachts he has come to know well as they disappear from view. Sometimes he never sees them again; sometimes they become regular visitors.


While they motored out of the river mouth towards the sea, Jamie was keen to show his new crew what it means to get the sails out and turn the engine off.

There was a lot to learn in a short space of time, but they were eager to soak up any information Jamie threw at them. Although she has in-mast furling, SY Esper is cutter-rigged, so has four sails to contend with. This means a lot of lines and quite a bit of winching. Fortunately they were all young, fit and keen to learn. Dan seemed the most willing to try anything physical, while Jia was interested in getting to grips with the electronics and navigation.

Since the gentle breeze was coming from the south west, they approached wild Ko Taratao (Thailand’s first marine park) into wind, finding a sheltered spot in the south east corner. Jamie remained on the helm, while Jia and Dan laid the anchor for the first time. It all went well, and while Jamie opened his second beer the boys got busy with their fishing rods in the afternoon sunshine. Dan was unstoppable, with Jia getting in on the action and even Julie landing a few catches. They lost count of the number of fish they caught. Millie was in seventh heaven.

Next morning the boys were up fishing at five. Jamie didn’t like the darkening skies, so he took a look at the forecast to discover some big weather coming in from the west. Fishing vessels, large and small, arrived from deeper water, dropping noisy anchor chain and crowding into the anchorage behind Ko Tarutao’s high hills. He told the others to prepare themselves for some potential big winds.

As predicted, the gale hit Esper’s anchorage, with the instruments showing speeds of 60+kts.

When the worst of it had passed, they made a dash for Ko Lipe, 20 or so miles west to anchor in the dark. And despite all the excitement of the day and, the boys were up again at dawn for more fishing.

Eventually Jia, Julie, Dan and Mae had to leave for Satun, and after despositing them safely ashore, it was just Jamie and Millie left on the boat.

The question now, was where to go next…

If you can’t play any of the embedded videos in this blog page, please go to the Video Diary playlist.

How to crew on a sailboat | followtheboat
7ads6x98y
We make weekly videos!