Anchor left of the marina at the bottom of the image. Avoid the coast guard. Alternatively anchor north east of the bay.

When Liz’s brother, Chris, visited Fethiye he left unimpressed. As an archaeological conservator there was little to admire in this relatively new town. Despite being developed in the early 1900s, with previous ruins in evidence here, Fethiye suffered the same earthquake that destroyed Marmaris and, like Marmaris, had to redevelop using modern architecture. I’m sorry, Chris, but you were wrong about Fethiye. The more time I spend here the more I like it. It is a gentle, laid-back place with little hassle from the shop-owners, cheaper prices than Goçek with a genuine sense of community. Chandlers are cheaper, more restaurants to choose from and an afternoon katabatic that cools the area nicely.

The spot to anchor in is west of the marina, but be careful not to impede the arrival and departure of the coast-guard! We were moved once. Forget actually going into the Ece Saray marina because it is exorbitant and they trample over local businesses without regard for their well-being (see the Through The Porthole interview with Banu to follow). Having said this one should still be able to tie one’s tender to one of the jetties, dump one’s rubbish in the marina bins, use the marina showers and ride the back of the marina’s wi-fi network, if one can get hold of the encryption number (why are so many wi-fi networks still encrypted? It’s so backwards). I’ve said it before and I’ll say it again, yotties do like the word ‘free’. 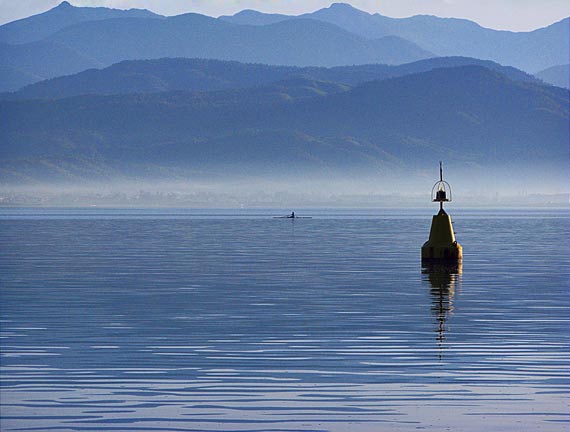 A beautiful shot of a lonesome rower in the bay of Fethiye, taken at 6am by Liz. I am insanely jealous of this picture! Source: Liz Cleere

Should you wish to put your boat in safer holding then the place to do it is Yacht Plaza Hotel. All is outlined in our article Through The Porthole, coming up.

The market on Tuesdays is outstanding. Even if you’re not interested in replacing your entire wardrobe with fake clothing and cotton towels, the food markets will blow you away. Try and catch the pembe domates (pink tomatoes) when they are in season around June time. Succulent.

When walking the market make sure you take a bottle of water with you. This can be filled up at various drinking spots around the market. Water is potable though it does take some people a few days for their tums to adjust. Ultimately you can't avoid drinking the local water so get used to it. 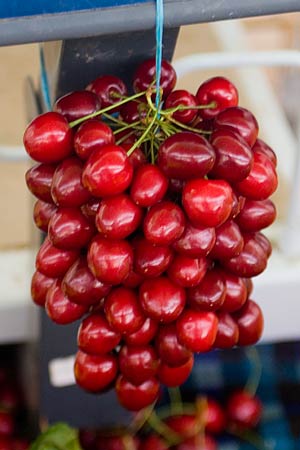 Although the bazaar is a bit of a tourist trap there are still some great shops and cafes there and the Duck Pond is reasonably priced. One of the things you may have read about Fethiye is the fish market, where a centrally placed building allows you to choose your own fish, either fresh or imported. Get them to gut it and then take it to one of the surrounding restaurants. It offers a novel and cheap way of eating fresh fish but I have to say I was disappointed in the way in which the fish is cooked. I went for red snapper and was hoping for a nice little spicy BBQ’d innovation. Alas, the choice is either grilled or grilled. Still, it’s one of those things that has to be done once to tick off the list and the unpretentious atmosphere makes it a fun evening out.

Holding: good/excellent
Marinas: the very expensive Ece Saray, plus one or two other boat yards (Yes marina is one)
Protection from wind: mainly good from meltemi but watch out for the unique westerly meltemi, it can really kick up!
Restaurant: loads. Go hunting down the side streets for some less-touristy ones
Market: Tuesdays. Huge!
Other info: Fethiye is actually a very big town with over 60,000 residents. It will take a while to properly check it out… something we’re still doing. But with every step we’re liking it more and more. Get chatting to the local shop owners, irrespective of whether you want to buy anything.

2 Comments on “Fethiye: A Modern Town That Grows On You”

How far would you drag your dinghy for a beer? •

Have you ever Med-moored? We used to do it all the

We've made it as influencers. Jamie sporting the l

Our first Spackerel in years and enough steaks to

Looks idyllic, doesn't it? These are the "Bajau L

Home for a week. The only sailboats sailing in Sab

Fethiye: A Modern Town That Grows On You | followtheboat
7ads6x98y
We make weekly videos!