Lots of fiddly jobs this week. That’s what the project is coming down to now, a collection of odd jobs, all interconnected in some way, and typically all held up by the late arrival of a vital material. This week we also play with butyl tape.

Bits and pieces, including Mey’s polished stanchion bases and a lesson in how to bed deck fittings with butyl tape.

Last week we showed you the butyl tape we plan to bed our deck fittings with. This week we have a go at installing our stay-sail track. It’s fiddly but pretty straightforward, once you’ve got your head around counter-sinking the bolt holes. Unfortunately I don’t have any photographs of the procedure so I’ll take some on the next job. In the meantime there’s a good piece on it in this week’s video clip.

The good news was Mey returned for five days. She’s become quite an expert polisher, with our cheap angle-grinder clamped to a block of wood, polishing disk attached. The stanchions and bases have come up a treat. 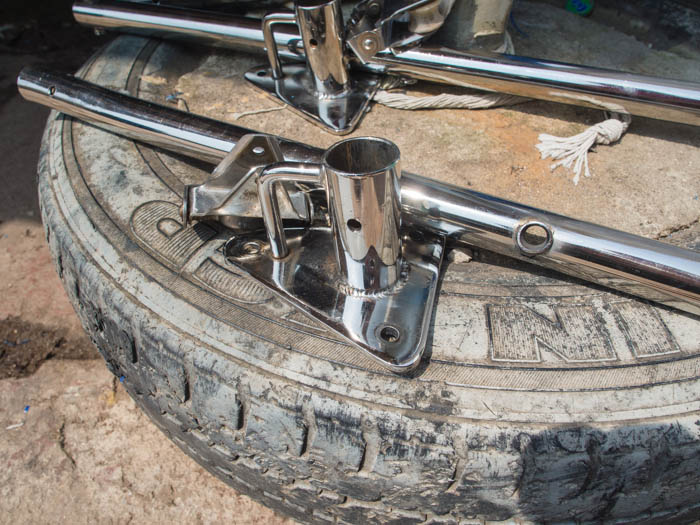 Mey is also cleaning up the portlights, removing them of old sealant and giving them a general clean. I’m surprised some of those windows remained waterproof, such was the degradation of the old sealant.

A couple of the windows needed resealing so we removed the old sealant, cleaned them down with acetone, and then used Sikaflex 295 to reseal.

We’ve also taped up around the portlights in anticipation for their sealant. As with all the fittings I’m fitting them all first to make sure we have the correct number of bolts and that all random holes in the deck have been filled with one fitting or another! Once we’ve done that, and once I receive my shipment of white butyl tape, we’ll start bedding them down.

One problem I’ve noticed with aluminium is corrosion in areas that are normally covered. I guess this is a form of crevice corrosion though I’m not familiar with the metallurgical reaction that’s occurring. If anyone can tell me if it’s the same as stainless being deprived of oxygen, please let me know. Anyway, I took it upon myself to fill said corrosion with epoxy mixed with microballoons. After it’d dried I sanded it back and it seems to have done the trick (though what little anodisation was left may have been removed in the process).

With the project coming to an end (although where the light at the end of the tunnel is, I’ve no idea), it’s time to lay off some workers. I was struggling to find work for the two remaining carpenters so this week we said goodbye to Tui. It was a little sad really since he’s been a part of the team right from the start. We’ve had some laughs and he’s been a great worker. On his last day he stayed behind for a quick drink and I chatted to him (using Julie as our interpreter) to understand a bit more about his caged birds he brings in every day.

There’s a little bit of this at the end of the video clip. I’m hoping to make it down to one of the competitions and understand a little bit more about this intriguing, albeit cruel, past-time (I dislike caged birds).

Saying goodbye to other yachties

Pictyured below is Phil of Big Bandicoot, and Kerry and Lynette of Fayaway. Here they are on a drizzly morning saying goodbye to Southern Wing.

Shortly after their departure Kerry and Lynette were dropped into the water. These guys have been in the yard for a few months and were our neighbours for a while too. Here’s Julie seeing them off at the slip.

Here’s a couple more from my Boatyard photography project. The irony in this first image would be better understood if you were familiar with Mr Gon’s ambitious work ethic:

And here’s two of the girls working in the supply shop. An on-going sub-project is to try and capture either of them not laughing.

More of the same with a reduced work-force.