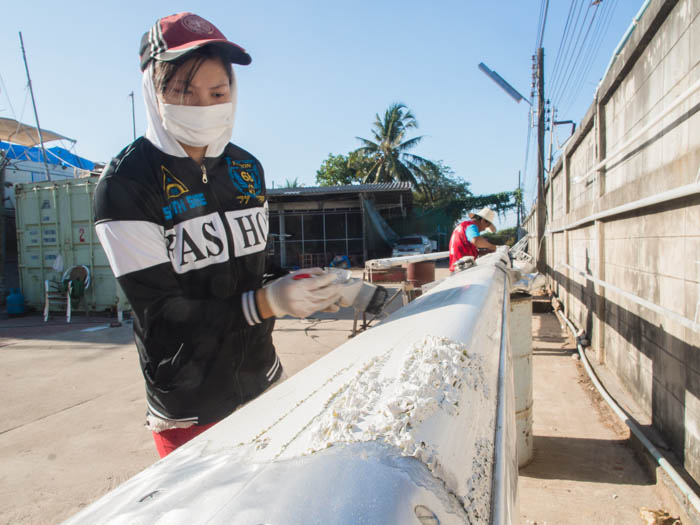 We’ve been building quite a team on Esper. The workers have been hard at it and work tirelessly both inside and outside the boat (watch six days of work condensed into a three minute video clip), but this week we had to let one of them go. It was an awkward situation compounded by a language barrier, but work’s been progressing so quickly it was our only option…

Six Days Work In A Boatyard In Three Minutes

It’s Sunday and you still haven’t woken up properly, so to ease you in to this week’s update we present an introductory video clip of the work done in the last six days reduced down to three minutes, complete with soothing background music to remind us of the lucky people sailing the oceans.

The biggest event that occurred this week in PSS Boatyard was the relocation of Esper. It involved moving four other boats along the track system the yard uses to move and park the boats. It’s fascinating to watch as six lads heave cables and jacks around the yard whilst the operator of the diesel-engine powered crank system move the boat from one location to another.

Esper in the cradles being moved along the tracks

The main reason for moving is to put Esper out the way since we plan to be here a few months. It also means we have our own corner where we can erect a tent around the boat in anticipation for the deck removal and painting. We’re making the most of the view before that happens. 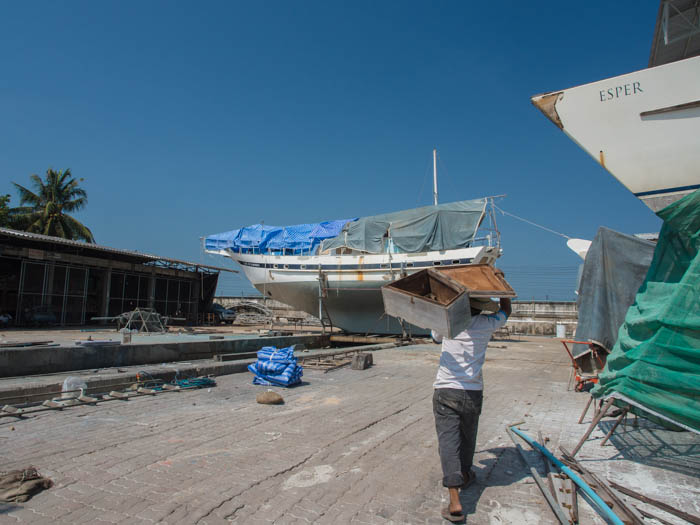 Esper (on the right, obviously), looking out onto her new home, where the other boat is located

Before the deck can be removed the last item to go was the toe-rail. Since this is through-bolted all the way down the side of the boat the easiest way for the carpenters to get to the bolts was to either chisel it or take a saw to it! 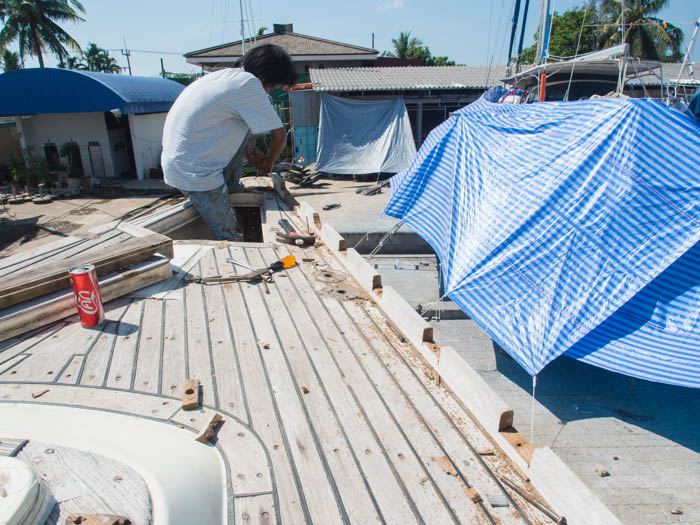 Esper minus her toe rail 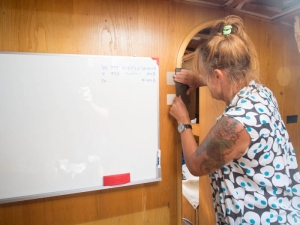 Liz pins up two veneer samples by our new white board

One of the difficulties in managing a project of this scale is removing oneself from the manual labour and spending some time on the computer doing research. The interior, however, is one of the main reasons for undertaking this refit so we spent some time researching interior ideas. It’s a minefield but fortunately we’re blessed with some kind of creative vision that allows us to see beyond the mess and picture what our new interior will look like. We felt it was important to let the other workers, the carpenters in particular, be aware of our vision too so Un, our project manager, has placed a whiteboard up in the saloon which will serve as a focus point for ongoing concerns with the project, including imagery and ‘moods’ of the look we are trying to achieve.

We spent quite a bit of time pouring over Formica and wood veneer brochures and narrowed the interior down to two veneers. Two significant changes we’ve been looking at is opting to turn the veneer on its side so the grain runs horizontally; and removing the dated trim around the doors. We’re also considering a brushed metal Formica in the galley to modernise it.

With the above in mind the two carpenters, Ton and Tui, began the messy job of removing the old ash veneer and chiseling away at the trim. Already the grey marine ply underneath gives us a hint of what the new interior will look like.

Esper’s interior at the moment

It turns out that amongst Un’s many talents are his skills in computer aided design manipulation. I thought perhaps this was just a little hobby but he’s a demon on AutoDesk and is able to work on our design ideas in 3D. The advantage of this is that not only are we able to visualise our ideas, but they can be easily interpreted by the carpenters too since everything is designed to scale.

Our electrician, Sombat, has started to tackle the snakes’ pit behind the old chart table panel.

Mey, our Burmese worker who started on the engine and continues on the mast

We added a new worker to the gang. Mey is a young Burmese girl with a penchant for fashion. She comes to work to strip paint off smelly diesel engines in tight-fitting leggings and hip shoes and is without doubt the best-dressed worker in the yard! Moreover she works without a break until she is forcibly removed from her seated position by the engine to take lunch. Her boyfriend, who works on the big motorboat, Thea, in the shed next door, pops over and guides her in his tea-break. She’s an asset to Esper’s team and after her engine-stripping job finished on Friday we made a point of finding other work for her just so we could hold on to her. 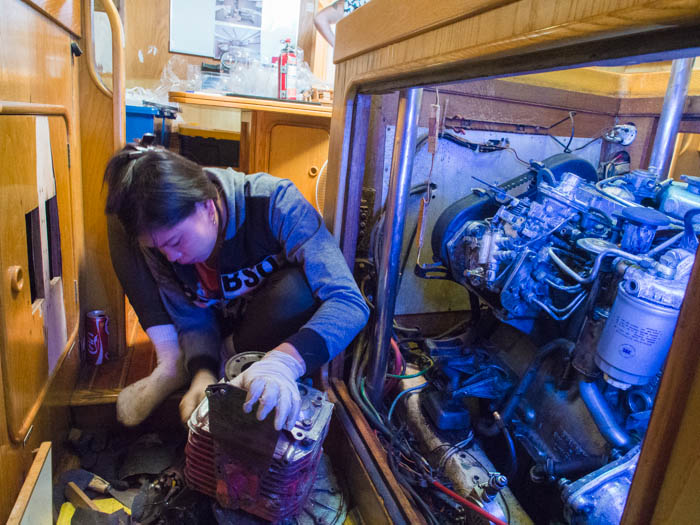 Mey cleaning the transmission and engine

Conversely we had to get rid of someone this week, which was not the most pleasant thing to do, especially since we had zero communication with this worker due to language differences. Unfortunately this person was tasked with the horrible job of stripping the lazarette (the small storage cupboard at the back of the boat) of its paint.

We began removing the mast fittings last week and we’re happy to report that, a week later, all fittings are gone from the main mast, the mizzen, the booms and the spinnaker pole. Big respect to Moo for persevering with this difficult task. We then ran lead-lines (mouse) through the masts and booms, which were labelled up.

Halyards are removed and replace with mouses. Picture shows the corroded parts of the main mast ground out with an angle-grinder

Since the chart table is being ‘relocated’ there’s an impact on the positioning of the electronics. New chart plotter, new ship’s computer and so on means some thought has to be given over to the logistics of wiring and fitting these items. We’re trying to save money by keeping our existing netbook for navigation purposes but we are planning to install a larger monitor for entertainment. Some thought has to be given to things like VGA change-over switches, as well as inverters to power hard drives.

Meanwhile we are going ahead with a B&G Triton navigation system. We’re quite excited about this but more on that another time.

We’ve now been in the yard for three weeks. Every single day, from 8am to 5pm, amongst the fibre-glass dust and searing heat, one man has been grinding away at the hull, tackling the osmosis. We’re happy to report that Lek has now completed two rounds on the hull and his job becomes a little easier as he now removes the delaminated parts of the hull in preparation for the hull rebuild. We’ve asked him to spray the hull thoroughly with clean, fresh water to clean out the acetic acid from the osmosis, and it seems to be working. Next week we plan to buy a jet-wash to assist in this process.

One man, one grinder, one osmotic hull and sub-tropical temperatures. On this rare occasion Lek is give a break to hose down the hull.

One of the biggest expenses in the refit project is the cost of materials. This can present problems what with daily cash withdrawal restrictions imposed by our bank, who this week compounded the issue by suffering a nation-wide (yes, Nationwide), Visa breakdown. Still, our materials begin delivery and we’re stock-piling them in preparation for the hull, top-sides and deck treatment.

We did consider running a tally of injuries sustained throughout our refit; so far we’ve twisted ankles, scraped shins, suffered metal splinters and sliced fingers. But Liz receives the fat cigar this week for walking into a metal cupboard door, open at right-angles around about forehead height. Now that’s gotta hurt! 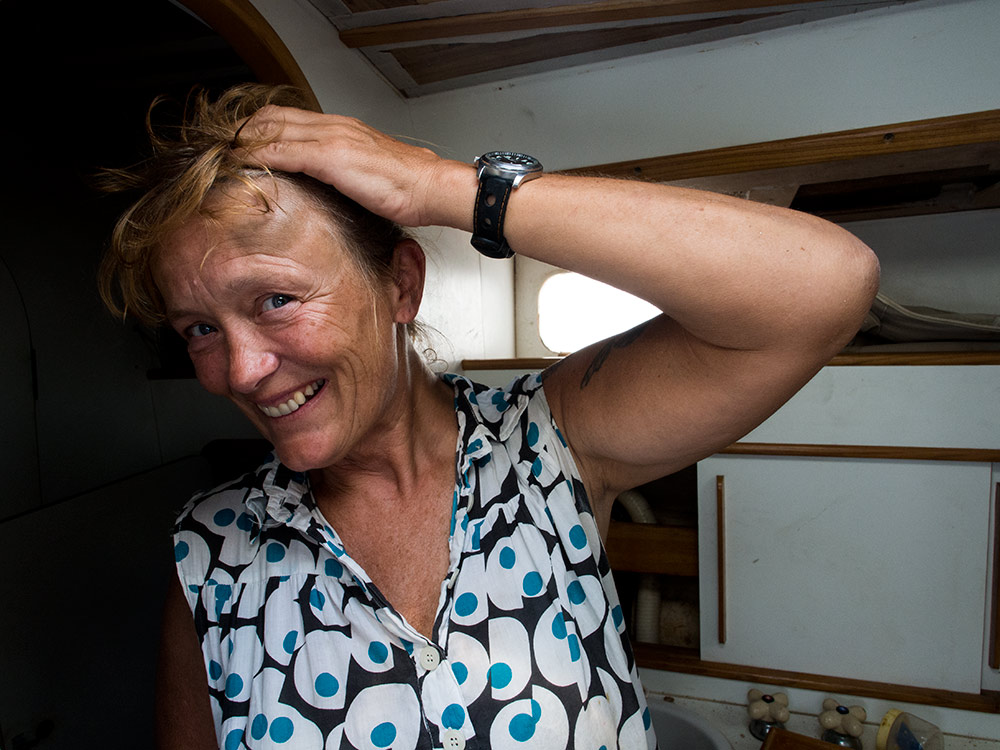 Yep, it’s Sunday and you skim-read all of the above, so here’s our weekly video summary of progress made this week.

The tent should have gone up already so we need to chase this on Monday as it’s holding up both the painters and the carpenters. The painters will start to sand back the top-sides (the bit on the side of the boat above the water-line). Meanwhile Liz and I will be going into Hat Yai with Un with a rather large shopping list.