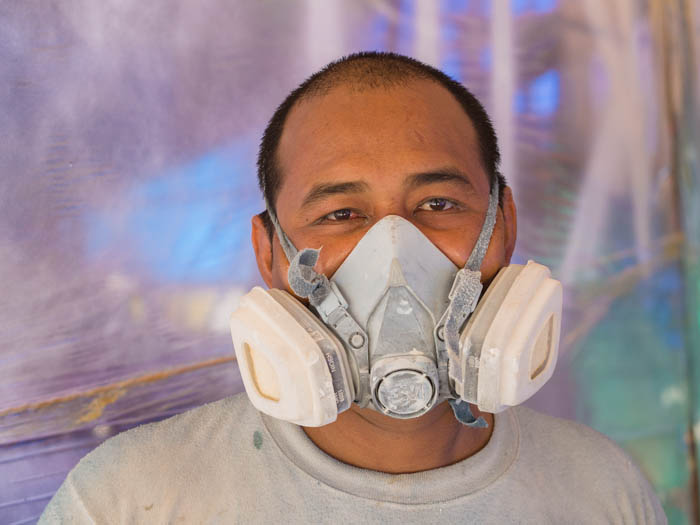 Week 19 was all about painting the topsides with the final coat of Awlcraft. The question is, what colour did we go for?

A longer clip this week that documents the spraying process of Esper’s topsides. Half way through Liz and I swap cameras as I return to the UK.

Wrapping The Boat In Clingfilm

The painting team spent two days assembling a network of string around the boat. Kim and Oot lining the deck with clingfilm

Once completed the team then covered the string with clingfilm, glued together with rubber glue, in order to make a tent around the boat. This, of course, is to prevent dust and dirt particles from landing on the topcoat once applied to the boat. Goy, the head painter, made it down from Phuket and started to clean and prepare his equipment.

The final part of the preparation is to cover the floor with water, in order to minimise dust, and then go round the inside of the clingfilm tent spraying it with white paint. The team also spray themselves in paint too. This is to attract the dust particles which settle and dry on the plastic and overalls instead of on the topsides. At least that’s the theory, time will only tell how well this works. At 12pm, when the conditions are right and the humidity has dropped, Goy begins painting the topsides. We were lucky with the weather. For the first time in weeks it hadn’t rained in five days. Today the conditions were perfect, with a gentle breeze coming from the south-west but an otherwise calm, sunny day.

It took Goy five hours to complete three coats. His team follow him round, holding the pipe for the spraycun, and continually watering the floor to minimise the dust. It’s hard work and Goy takes a 15 minute break between coats to get away from the cloying, poisonous spray dust to have a cigarette. Portrait of a Painter

I’ve taken many hundreds of photos. documenting our progress, and I’ve been taking a few portraits too. Here’s Goy in his mask, taken under the tent before he starts work. I’ll post up some more portraits in due course.

We deliberated for ages about our waterline. The main problem was finding a colour that matched the topsides. We were given a sky blue paint for the job but we felt that, unless it was a dark blue, we’d have to settle with sticking a transfer on instead. Fortunately Goy came down with a small bottle of Awlgrip Midnight Blue. I think it was left over from the Thea project, whose hull was sprayed Midnight Blue, so we gave him our sky blue in return for a sprayed waterline.

In the video clip we said we settled on a 20mm waterline. It’s not, it’s 10mm. Here’s Oot masking off the front… And, with another perfect day for spraypainting, Goy applied the Midnight Blue around the masked area. Under the coloured tent it’s very difficult to get an idea of what the final paint job looks like. We opted for Awlcraft Moon Dust, but it looks a lot lighter than we had originally anticipated. At least that’s what we thought. Up on deck you can get see where they masked off and you get a contrast of the Moon Dust against the white epoxied deck, and there is a stark difference. I think we’ll probably only really see it when we take the tent down and get Esper back in the water. Either way, Liz was very pleased with the results… Thank god we got the topsides painted when we did… No rain for a week, spray painting done… and then the heavens opened At this point I left for the UK, leaving Liz in charge of taking photos, recording video and, most importantly, spearheading the project. It’s great to be back in the UK with my family, especially as I’m here to celebrate my father’s 70th birthday, but it’s rather frustrating leaving the project at this juncture. Right now the navigation system is being delivered and I need to be there to oversee things, but at least I got to see that Moon Dust on the topsides. I left pretty happy.

Of course other work continued around the paint work, though the workers had to take days off at a time since they couldn’t get onto Esper. Pong is now working on the toe-rail and the varnishers have almost finished the floor. Moo, Lek and Yodchai are smoothing over the hull and will soon we applying a special micro-balloon filler. Ton and Tui continue with carpentry inside and the Dean the electrician is tackling the lights. Liz has been busy documenting all this so we’ll have more updates next week.