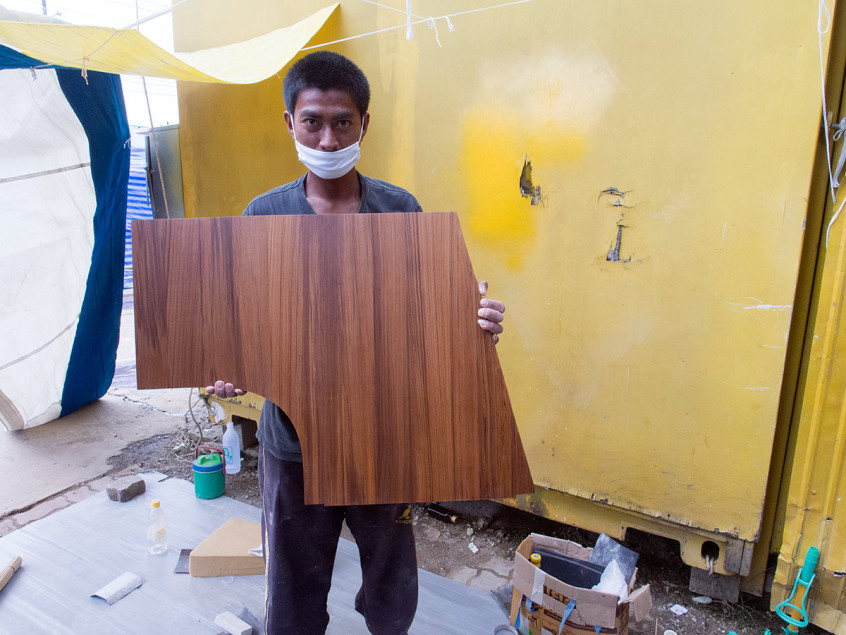 In the week that Thailand falls under martial law… the top coat is now being applied and the masts look like new. Goy’s paint team are working on various lids and covers too, leaving just the topsides and deck to paint. That won’t be until the toe-rail ‘cuts’ have been smoothed and the cockpit box finished though. Meanwhile the cockpit seats are complete and the varnishers are doing a fantastic job on the floor.

A special report covering the Thai martial law situation, a look at how the locals are coping, as well as our usual round-up of events from the yard. Not to be missed…

Well, when we say ‘complete’, we mean the teak has been laid and glued down. There’s still the caulking to do and we’ve decided to go for grey instead of black, so after completing the cockpit Pong set to and removed the old black caulking from the cockpit floorboards. One of the big changes we’ve made to the deck is to lose half of the toe-rail. It sounds more controversial than it is, but we’ve decided to go with a trend in current boat building. We’re removing the teak toe-rail from non-essential areas, including at the bow and the stern, and by the gate. Not only does this give the boat a more contemporary look, but it also allows water to flush away more easily. Esper always suffered from growth and mold in the crevices where water could never escape. We’ve cut away at sections of the deck and filled them in with fibreglass and epoxy. We’re smoothing these edges back to give a curved finish to the edges where there is no toe-rail. Filled but yet to be smoothed non-toe-rail edge

Although not pictured the inside of the cockpit ox has been formed and the front panel has been sealed. We’ll be cutting out various holes for instruments and speakers but the idea is to contain the electronics in a relatively water-tight conduit. You can see more detail in this week’s video clip.

Ton and Tui have done a cracking job of the veneer but this week they both hit brick walls with the eye-height coming in both the saloon and the cabin. Tui is on his third attempt with the saloon combing, whilst Ton is on the same with the curved walls in the cabin! They’re awkward spaces where a straight cut won’t produce the correct shape required fill the gap.

Finishing off the tool drawers was a welcome relief for the two lads but they’re gonna have to tackle those jobs next week. We got a glimpse of what our interior floor is going to look like as Dang sanded and applied polyurethane to the boards that Pong has so painstakingly created. They really are starting to look beautiful. Here’s Dang with the board that goes round the mast. Dang the varnisher with one piece of floorboard. Solid teak!

Finally, we’re happy to report that the masts and booms have received their final top coat! If our deck ends up looking the same we’re going to need shades to look at it! Still sealed in the long tent, the masts are now curing. As reported in last week’s news flash, Little Mum was rescued from the yard and given some respite in the run-up to her pregnancy. We’re happy to report that she gave birth to a littler of six on Monday. One died but the others are healthy, squeaky bundles of delight. Millie and LM have had a couple of dust-ups (one involving a white cobra and Liz receiving multiple scratches to her forearm) but the kittens are doing well.

We’re so close to spraying the topsides it’s unnerving, but there’s still that cockpit box to complete, and not forgetting the non-toe-rail areas too. And, as promised in the video clip, we’re gonna take a long, hard look at those floor boards as Ton and Tui complete their impossible tasks.